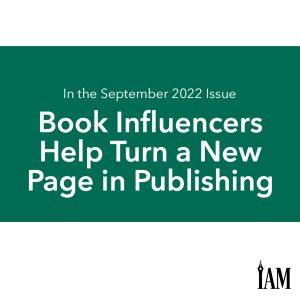 Nestled in her New England home, independent bookseller Kaitee Yaeko Tredway spends time each week arranging stacks of books and displaying them against a variety of backgrounds. She snaps several photos and writes out creative captions to pair with each, then decides when they’ll publish. Sometimes she makes an appearance in front of the camera too, posing with a recent read or filming and editing a ninety-second video if she thinks she can find a creative spin on a trend or make it fit within her niche.

Tredway, the face behind the Instagram account @kaiteeyaeko.writes, is part of a corner of social media that has been dominated by readers and book lovers in recent years. Especially during the pandemic shutdowns of 2020, reading-centered accounts exploded in number and popularity across YouTube, Instagram, Twitter, and TikTok, leading to massive spikes in book sales. In 2021, readers bought more than 825 million print books, according to NPD BookScan (https://npd.com), an industry analytics tracker. The number is the highest on record since the organization began tracking data in 2004 and came on the heels of a similar year of growth for the industry in 2020.

The boost in sales is felt even more acutely by authors whose works have gone viral. Madeline Miller’s The Song of Achilles was traditionally published in 2012 with a print run of twenty thousand units; in July of this year, according to the New York Times, the book’s publisher reported having sold two million copies across all formats.

In some cases, the shift has extended to authors from diverse backgrounds or those outside the traditionally popular sphere, such as self-published authors or those writing in niche genres. With the number of online literary enthusiasts growing, the trend may suggest a leveling playing field in the world of book marketing and offer further proof of just how much influence these online reading communities have on the publishing world.

A Pandemic Book Club of Sorts

For Cheyenne Robinson-Bauman, who manages the Instagram account @queer_bookwyrm, being part of “Bookstagram”—bookish Instagram—has served as an introduction to indie authors, as well as an opportunity to introduce readers to more books by diverse authors.

“Before [Bookstagram], I couldn’t name an indie author or even know where to find them,” they write. “I think [Bookstagram] has kind of given indie authors and self-published authors more legitimacy and has helped their reach. Unfortunately, I think it has also negatively impacted traditional publishing in the way that popular authors only get more popular and the others fall to the wayside.”

Robinson-Bauman began their account in September 2020 after they began working from home, only one month before Tredway created hers. Tredway, on the other hand, started her account as a way to market book-related cross-stitch projects she was selling through Etsy—her own “pandemic project,” she says. As time went on, she found herself posting less about her bookish artwork and more about the books themselves.

Both agree the community they’ve discovered—and helped grow—has been one of the better parts of their platforms. “Social media can be a mixed bag at times with the negativity on high, but I’ve only had positive experiences with the other accounts I follow,” Robinson-Bauman writes. “I’ve also made some great friends from all over the world.” In their two years on Instagram, both Robinson-Bauman’s and Tredway’s accounts have garnered audiences more than six thousand members strong.

“My favorite thing is finding people who read books in the same way that I do—the people who love a book enough to not judge that you have five copies and who want to live inside the characters the way you do, so they go and they put together a cosplay,” Tredway says. But she also enjoys supporting and promoting her favorite authors, “especially because a lot of the books I love don’t necessarily get the mainstream attention the way some of the big authors do.”

The authors she’s referencing include many women, people of color, and LGBTQ+-identifying people—authors regularly featured on Robinson-Bauman’s account as well. Both Tredway, as a queer, biracial Asian woman, and Robinson-Bauman, as someone who is queer, nonbinary, and biracial, find themselves drawn to diverse stories that reflect their identities and present new experiences. But that doesn’t mean every part of book social media is as inclusive, Tredway says. In other corners of Bookstagram, she’s seen people post photos of books by marginalized authors yet never get around to reading them, and as often as Twitter or TikTok posts have boosted authors’ names for good reasons, she also can name authors who have suffered intense scrutiny or criticism.

Robinson-Bauman agrees. “I see a lot of people post a certain book during an awareness week or during pride month, but [they] have rarely read those books,” they write. Although they believe social media’s influence has helped boost diverse representation in some ways, they believe the industry as a whole “still has a long way to go.”

The Influence Extends to Indies

Importantly, the indie author sphere is one such area where Robinson-Bauman believes book influencers are helping to increase representation and, considering the bias and discrimination they believe exists among traditional publishers, truly shape the industry.

Tredway admits she isn’t as familiar with books by indie authors. “I’m going to be very frank about it—part of that is that I don’t see a lot of authors of color in the indie sphere on Bookstagram.” She knows they exist, she says, but she hasn’t spent the time to look for them and hasn’t come across them in her Bookstagram feed. Still, she has witnessed the potential of partnerships between indie authors and book influencers thanks to a series of cosplay collaborations between indie authors and a friend of hers on Bookstagram under the handle @live_1000_lives.

“Since January, she has integrated into her cosplay three characters at this point from new releases of indie authors,” she says. The collaborations were successful at boosting the authors and promoting their work, especially because their genres aligned well, she says. She thinks that kind of compatibility can help other indie authors establish a relationship with book influencers and grow alongside them. “As soon as you find the people who read books that you like, you find people who are going to like to read the book that you write,” she says.

Rather than using the platform strictly as a marketing tool, she encourages authors to post about other books they enjoy and truly engage with the community. “As an author, finding your niche in that, that’s tied directly to your age group and your genre, and then sticking your fingers into the community there … is a way that Bookstagram can actually work for you without it being a huge marketing slog,” Tredway says.

“Get to know your community, and who knows what collaborations might grow out of that,” she adds.

Robinson-Bauman also emphasizes the relationship between indie authors and reading personalities. They encourage those wanting to promote their work to reach out to content creators. “Bookstagrammers are typically really supportive people. Sometimes, you can even make great friends that will become critique partners, beta readers, editors, and ARC street teams. Some of my best friends on Instagram are indie authors.”

“Go to where the readers are,” they write. It seems a growing number of them can be found on social media—all it takes is a search for the proper hashtag.