5 Tips for Adding Diversity to Your Manuscript Draft 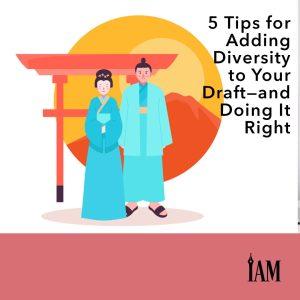 Writing about topics that do not belong to your culture can be tricky. In today’s society, writers venturing into those areas are sometimes worried about being accused of cultural appropriation or the use of topics from other cultures for gain or profit or in a way that reinforces stereotypes. Even more so, we’re taught as authors to “write what you know,” and crafting a story involving another culture can be daunting if you know little about it. The problem is that in today’s world, we crave diversity, especially in our entertainment. Our books are no exception.

So how does one write about a culture they are not familiar with?

Bringing other cultures into media is not a new concept. It’s been done for thousands of years. In 2002, the West was introduced to Japanese lore in the form of movies. The Ring, Shutter, The Grudge, and more were adapted for the United States. These Japanese movies deserved to be seen all over the world, but in American culture, where audiences still struggle with the idea of reading subtitles, filmmakers cast Caucasian actors in the roles, allegedly to make them more appealing to American viewers. What isn’t widely known is that the directors of the original Japanese films were often involved behind the scenes—Ringu writer Hiroshi Takahashi worked on The Ring, uncredited, and helped write its sequel, and Ju-on director Takashi Shimizu directed its American counterpart, The Grudge, according to IMDb (imdb.com). This allowed the adaptations to retain the essence of the legends. For instance, The Ring (Ringu) was based on Okiku’s ghost, Japanese lore from the sixteenth century, and relocating the tale to America helped millions of people learn about it for the first time.

Before that, across four decades, Sidney Sheldon often wrote books set in faraway countries, ones we could only imagine. In 1974, Dean Koontz released the ever popular The Key to Midnight, which largely took place in Japan. Caucasian-American author T. C. Boyle produced the incredible book The Tortilla Curtain in 1995, which introduced many to the struggles of immigrants. Memoirs of a Geisha, a highly celebrated book and movie, was originally released in 1997 and penned by a Caucasian-American male, Arthur Goldman.

There is great precedent for positively writing about cultures other than your own; however, there are also examples of when that goes terribly wrong. The movie The Curse of La Llarona cast a Caucasian woman in the leading role against a backdrop of Mexican actors. Backlash swiftly ensued when the film was released. Ghost in the Shell is an extremely popular Japanese manga, but when reproduced in the West as a live action film, Scarlett Johansson was the lead actress instead of a talented Japanese actress.

Writers and screenwriters fear the label of appropriation—with good reason—due to movies like this. In Quartz in 2015, lifestyle reporter Jenni Avins wrote, “As we watch artists and celebrities being pilloried and called racist, it’s hard not to fear the reach of the cultural-appropriation police” (https://qz.com/520363/borrowing-from-other-cultures-is-not-inherently-racist/). Today, we are cautioned about not writing about other cultures, and entire groups on Facebook are dedicated to ripping apart anyone who dares write outside their race, ethnicity, gender, or culture.

But it has been done—and done successfully—so do not let that fear resonate in you. It is not necessary to deprive oneself of a valuable study into something with which you are not accustomed in order to provide an insight into that culture for readers. Time and again, you can see excellent examples of how to bring other cultures into your work. But a fine line exists between doing so positively and appropriation. So we now return to our original question: How does one write about a culture they are not familiar with? Here are five points to remember:

Nothing is worse than writing about another culture because that area of the world is now “popular” or “sells well.” When you write for profit only, your book will suffer many downfalls, including being disrespectful to the culture on which you are earning money. Respect is the number one point to remember when writing outside your own walls. You are a writer dipping your pen into others’ lives, traumas, and history. You are in their world; they are not in yours. Traversing with the utmost respect is always required even after the book is published and marketing begins.

It’s all too easy to fall into the trappings of stereotypes. We see them so much in entertainment that it’s hard to differentiate what might be cultural and what is a stereotype forced on that culture. This makes the next point oh-so-valuable.

As writers, if we don’t know something, we research it—and hopefully not on Wikipedia. When you are writing about another culture, though, you need to take your research to the next level. Ensure you are gaining knowledge through reputable sites, preferably ones from that region. Reading books or watching movies from that culture is highly beneficial. With the internet, you can easily find people from that area who can tell you what’s what and can read your story before publishing to make sure your content is right. In cases where you are writing LGBTQIA+ or disabled characters, you can also locate sensitivity readers or those within the communities for accuracy.

If your story is fluid and can exist in any culture, such as a horror writer seeking a lesser-known legend or curse, open yourself up to the world. Many peoples are highly underrepresented, even in today’s diverse society. OzMari Granlund, author of Dark Fantasy based on Filipino lore, wishes more authors would explore her culture as it is often overlooked in favor of more well-known areas, like Japan, China, and South Korea. “Our monsters and concept of fear is vastly different from the West,” she says. “The Philippines alone have over three hundred eighty types of fantastical creatures that the West has never even heard of.” The Aswang Project (aswangproject.com) is a wonderful website that can take you down that tunnel of all those creatures. Sites like these are filled with ideas for new stories and topics that Westerners have never heard of or conceived.

Recognize the value that other cultures bring to the world. This goes right along with respecting traditions and history. We have such a vibrant world filled with so many tales, and they are rarely found in your backyard. Remember and recognize what a culture has been through historically and how they may have been misrepresented in the past and commit yourself to doing it right through research.

One might think that just because their skin is white and the other culture has white skin, they can write those characters without concern. But it’s important to note that many of those, whether Caucasian, Black, Hispanic, Native American, or Asian, have differences in their legends, lores, and history that do not belong to others with the same skin tone. Don’t limit yourself to only certain areas of the world. Award-winning author Jalpa Williby often visits other cultures in her work, and that includes disabled characters, such as in her book, My Perfect Imperfections, in which the lead character has cerebral palsy. She says, “Individuals with disabilities are significantly underrepresented in mainstream media. How many heroes are in wheelchairs?”

Writing about other cultures can be fun, provide wisdom, and give you a newfound respect for people all over the world. Now that you have the knowledge to move forward on a multicultural journey, only one question remains: Which one will you discover first?