What Writers Can Gain from Clubhouse, the Audio-Only Social Network 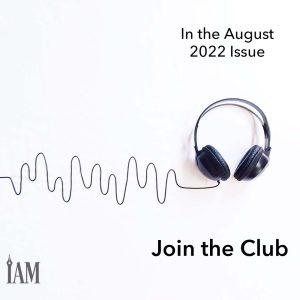 2020 was a pivotal year for everyone. COVID quarantines had people scrambling for things to do, especially creatives. For writers, book signings were postponed indefinitely. Screenwriters watched as filming around the globe halted, and life generally took a dystopian turn. More than ever, networking on social media took center stage as we strived to keep up our relationships and develop new ones.

Insert Clubhouse, the audio-only social media app. From the beginning, Clubhouse distinguished itself as a new way to network with people around the world. At first, it operated more like a secret society, with only iPhone users having access and membership requiring an ever-elusive invitation. According to its website, Clubhouse operated as an “invite only” club to accommodate its growth during the beta-testing phase. Soon enough, the app opened up to Android users and, more recently, new members no longer needed an invitation to join.

Still, many writers are unfamiliar with the app or unsure how to use it for networking. As a less common platform, Clubhouse can easily fall into the trap of being viewed as just one more app for authors to contend with among other marketing tools like Facebook, Twitter, and TikTok. But Clubhouse truly fills in a unique space and can help your author career should you choose to use it.

Once you’ve downloaded the app, you’ll input your bio, photo, and interests. Despite being audio only, first impressions make all the difference. An eye-catching bio is key. Including links to your books, website, and other social media accounts is a must, but you’ll also want to give new acquaintances a reason to visit them. Some authors include a couple of book titles or short Bitly links to their latest releases, but don’t keep it all business. Write out some fun facts you want others to know about you. If you have a longer bio or more information you want to impart, do it in bullet-point form using a fun emoji for each new item.

After you’ve set up your profile, the next step is finding others with whom you can network. The best way to do this is to use the search feature at the top of the page and search for clubs that meet your interests. For instance, the Writing Room connects writers through workshops and other rooms, and Writing For Your Life includes rooms with industry guests to provide advice and tips on just about anything writing related. If you want to focus on sprint writing, the club Write That Thang provides all the sprints you can ask for. You can also find clubs based on your particular genre that talk about everything regarding your interests.

After you’ve found some clubs to join, start exploring rooms, the meeting places within each club. These rooms are live, but you can also find recorded sessions if the moderators allow it for that room. You can find recordings on the club’s main page within the app. There, you can also find information on upcoming scheduled rooms, although a member of a club can host a pop-up room at any time.

Upon entering a room, you are automatically placed in the audience section. Above the audience section is the stage, where speakers reside. The ones with a green asterisk are moderators, and others on stage are people who have come up from the audience to ask questions or talk. Some rooms are more informal, where everyone is on stage chit-chatting, but most rooms operate in the stage/audience format. If you have something to say or ask, you’ll raise your hand, or unmute yourself, at the bottom right corner of the screen. A moderator will pull you up, and you will automatically be on mute. To speak during your turn, you will need to unmute yourself, then re-mute once you’re done speaking.

One of the biggest mistakes a person makes when on stage in a room is to give their bio and ask others in the room—especially moderators—if they’ll review something they’ve written or tell them they are looking for a particular type of writing gig. Just as you wouldn’t walk up to someone randomly and do this, you wouldn’t want to brag about yourself or beg for work when networking. Instead, stick to the topic. If you’re first asked to introduce yourself and say what you do, keep it brief. If listeners want to know more, they will look at your bio and possibly follow you. Also, when in a room, even if you’re not speaking, it’s courtesy to follow all moderators. If an audience member on stage talks about something you’re interested in, check out their bio and follow them. They will probably follow you back, and you will have begun an integral part of networking: following others and gaining new followers.

After attending enough rooms, others will get to know you and invite you to join additional smaller clubs where you can get to chat with more writers and industry leaders. The more rooms you participate in, the more opportunities you will have to meet others. You also do not just have to attend rooms on writing. Finding other writing rooms or rooms in the areas of your interests, such as movie watch parties or book discussions, can help you meet new acquaintances and friends. You’re also not limited to joining rooms. Start your own rooms, especially those with a specific topic to discuss or debate, and others will join in. You can do this on your own or find others to co-host a room with you.

Just as with the larger rooms, if you’re in a smaller room with acquaintances, don’t brag about your work or solicit connections. An additional must: Don’t lie about yourself. Amazon, IMDb, and Google are powerful tools, and it’s all too easy to check someone out. If you’re giving false information or inflating your résumé, that person will automatically blacklist you. And because people on Clubhouse talk, if you enter a room with someone you’ve misrepresented your career to, they will let others know.

Although others will vet you via the Internet, you’ll also want to do the same to them. If someone approaches you about working together, do your homework first to verify they are who they say they are. And like with any other social media or networking, before you send anything for someone to review after they’ve requested, send that all-important NDA first. Also, just as you wouldn’t send a publisher or agent an unsolicited manuscript, do not send an unsolicited manuscript or screenplay to another writer, publisher, director, or industry expert. Wait until you receive an invitation.

Although the list of dos and don’ts is large, many have found success networking through Clubhouse. “Like anything with the entertainment industry, you have to weed out a lot of talkers and people claiming to things they are not, but Clubhouse has been a great resource to connect with writers from all over the world,” says Gavin Michael Booth, writer, producer, and director of The Scarehouse and Last Call. “I’ve found two co-writers for feature scripts as well as been attached to direct two other short films from writers I first met on Clubhouse.”

Networking on Clubhouse can be daunting at first, but it is an important part of social media with which writers are largely unfamiliar. When following the unspoken regulations of the app, one can not only make new writer and reader friends but also find huge opportunities for their career—all the more reason to join and start exploring a whole new corner of the world.