Travel the World with the World Wide Web: Research Tips for Writing about Real Places 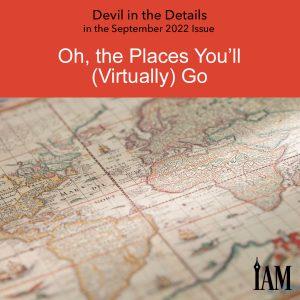 When it comes to choosing a location for a novel, short story, or script, many authors stick with what they know. Stephen King’s novels typically stay in Maine. Hailing from Kansas City, Missouri, Gillian Flynn’s three novels take place in the rural Midwest. Anne Rice is well known for her exotic paranormal tales, which mostly take place in her hometown of New Orleans.

Mystery and Thriller author Leila Kirkconnell sticks with the places she knows from various parts of the United States. “Even though my stories take place in different cities, they are all where I have been,” she writes. “Writing what I know helps me with authenticity, and it’s nice having my characters walk where I have previously been. Going back to those cities, I can watch my stories unfold in my mind.”

Sometimes, a story calls for a different backdrop, quite possibly in a location where the author has never visited. When this happens, you can make your work as genuine as possible by adding locations and landmarks as well as capturing the overall feel of the area without insulting the residents.

The obvious way to familiarize oneself with a new city or town is to plan a visit, but even if you’re setting your story in a location where you went once for vacation, you will need to supplement that with research. What you see on a weekend trip is not what the general population of that city sees. You will need to mingle with locals, find the out-of-the-way places that only residents know about, sample the local cuisine, and ensure you represent the area accurately.

Pro Tip: Safety comes first, so ensure that you aren’t headed to an area that’s high in crime or that’s unsafe for out-of-towners. Research your destination thoroughly beforehand to ensure you are safe at all times.

Traveling to a location isn’t always possible, however. In this case, research is paramount to setting your book in an unknown location, but accurately representing that area can still be challenging. Just Googling a city and reading about it is usually not enough. You will need to dig deeper. Watch videos about the area, join a locals group on Facebook, or interview those who live there. Utilize Google Earth to “visit” the area. Flickr also has pictures of just about anywhere in the world.

While writing, pay attention to terrain and landmarks, and study up on the climate and anything unusual in the area. If you set your book in Alaska during polar night, you wouldn’t want to write about sunshine-filled days. Look up weather patterns so you know if the area has a rainy season, a time when it’s particularly windy, and how much snow is typical. The Farmers’ Almanac (https://farmersalmanac.com) is an amazing resource for future weather forecasts for a region, but it also provides information, such as a full-moon calendar, a zodiac calendar, and hunting and fishing calendars.

Pro Tip: The Urban Setting Thesaurus and The Rural Setting Thesaurus from Writers Helping Writers provide incredible detail and information about more than one hundred settings, including details that will help you elevate your writing with “show, don’t tell.”

Each area in the world also has language differences, not only in accents but in the way they say certain words or phrases. If you use “pop” in an area where they say “soda,” readers in the region will know you are unfamiliar with their way of life. As to accents, even traveling forty-five minutes in a different direction can result in different speech patterns. Search for videos from the area so you know how to write dialect, but remember that even people within the same region might have different accents.

Reading books by authors who are from the area can help you incorporate accurate information into your story, and watching movies about a location can provide a great visual aid. Try indie films first, as those are often filmed in the same region where the story takes place.

If you’re writing anything to do with crime, research local city, county, and state regulations, penal codes, and sentencing guidelines. Police department sites often have statistics on crime, but if they don’t, several websites track local stats and recent crimes, such as CrimeMapping (https://crimemapping.com) and the FBI website (https://fbi.gov/services/cjis/ucr) in the US. For smaller or rural locations, you may need to contact the local police or sheriff’s department to glean that information.

Authors writing Historical Fiction can watch documentaries or videos from that time frame if possible. If you can, interview people who lived in that area during that period. Otherwise, seek out legitimate resources, such as textbooks, newspapers, or firsthand accounts. Books written in that time period may help too.

Authors Marisa Oldham and Carraine Oldham wrote about Nazi-occupied Poland in their book, Remember the Stars. “For over a month, we watched every Holocaust documentary we could, for not only the history but to better describe the location we were writing,” Marisa Oldham says.

“With our topic of the Holocaust, it was important more than ever for us to describe everything exactly as it was,” Carraine Oldham says. “We learned so much about what it looked like in that time period, and it helped us to enter a past world, which would have been impossible without hours upon hours of research.”

Anyone can set their story in an area with which they are unfamiliar, even if you cannot visit in person. With a lot of dedication and research, you can make a world come alive so that you even impress the locals.