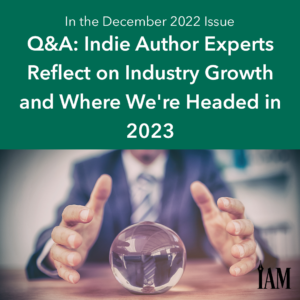 For the indie author community, 2022 has undoubtedly been a year for the books. In February, Draft2Digital announced the acquisition of Smashwords, bringing two of the largest independent distributors of self-published books together under one name. Less than a month later, Sci-Fi and Fantasy author Brandon Sanderson made history with a Kickstarter project that earned more than forty-one million dollars over the course of the campaign. Thanks to the continued growth of reading communities on Instagram, Twitter, and TikTok, countless indie authors have seen their books top bestseller charts thanks to social media. And if the record-setting vendor presence at November’s 20Books Vegas conference is any indication, authors this year have more platforms, tools, and technology available to help grow their businesses than ever before.

Now, as we set our sights on the new year, seasoned indie authors are offering their thoughts on what self-published authors can look forward to in 2023. For Draft2Digital Director of Marketing and Public Relations Kevin Tumlinson and Joanna Penn of The Creative Penn podcast, that means new opportunities in the world of AI tools, whereas for USA TODAY bestselling author Russell Nohelty, that means more chances for authors to explore marketing and distribution models that work best for their businesses.

Note: Responses have been edited for length and clarity.

What are the most important developments that have come about for indie authors this year?

Kevin Tumlinson: I think the biggest thing to come out in 2022 for the indie author community is the acquisition of Smashwords by Draft2Digital. … It’s opening up a lot of doors for indie authors in terms of increasing their reach, increasing the number of storefronts that can hit but also empowering them by giving them their own store, basically. It’s the indie author sales platform where they get a bigger royalty than they get from any other retailer.

Russell Nohelty: I’ve basically been wide my whole career, and talking to people about being wide before, you would think that I had three heads or told them I was going to shoot a baby into the sun. And as time’s gone on, it’s slowly chipped away at that. But I think this year was a seismic shift. I was at a convention, and someone asked how many people have considered going wide, and 70 percent of the hands went up. I was shocked because in this crowd, if it’s not working for them, Kindle Unlimited can’t possibly be working for anyone.

What challenges do indie authors face?

KT: Amazon has always been the go-to, number one place for people to buy e-books for the indie author community … but the shifts in the way Amazon does things, that is kind of having detrimental effects on the industry and the community. We have no insight into what’s happening or how things work, but we do know when something has changed because we will see things like our sales drop or our promotions disappear, and there seems to be no internal promotion. It would help the community a great deal if people stopped doing exclusivity within Amazon because it’s basically locked up the industry a bit.

JP: Visibility is a challenge, but to be fair, it’s always been a challenge. My recommendation … is to build an email list. Technology is still a really powerful thing, and if you own your list, and you own your website and you own your intellectual property assets, you can continue to make a living or earn money or reach readers, whatever your definition of success is, regardless of the change. Everything changes, and you have to keep reinventing yourself, but the email list has really stood the test of time.

RN: I think the biggest challenge is people trying to figure out how they can create an ecosystem for themselves that works for them. It does take a lot of effort to build the marketing and the author ecosystem. The challenge is making that transition is super hard—to go from thinking, “I’m an author who just turns on ads when I do a launch, and money comes out the other end” to “Oh, I have to be very strategic” is very tough. But every other creative industry, from movies to films to television to fine art, has made that transition. And I think that they’re all better for it.

What do you hope to see change?

KT: I think every author should be aiming for wide distribution over exclusivity with Amazon or anyone else. They lure you in with what seems like easy money, and then you’re kind of stuck because you’ve been spending all your energy and time marketing to a specific segment of a specific audience. Everyone who I’ve ever met wanted their books to be available worldwide to as many people as possible. That’s just not going to happen. Amazon only has a limited market share worldwide.

JP: I hope that there’s more of an empowerment in the community to connect directly with readers. What I think will happen in 2023 is, finally, authors are going to start selling direct more. What we’ve seen this year in 2022 is a realization that the existing digital abundance model is starting to break and that the best way for authors to make money is to go direct to readers. They’ll be even less visible because it will all be direct, but most independent authors, I think, are more interested in making a living and connecting with readers.

RN: Most authors who are unsuccessful believe their books are bad. They believe there is some problem with their book that prevents it from being successful. And that is not an untrue statement all the time. But so often we find authors who write great books, but they’re trying to fit a square peg in a round hole. Their decision to put their books in Kindle Unlimited or however they’re choosing to market their books is where the fault is, especially if you have a good cover, a good blurb, a good look inside, your formatting is good, you’re hiring an editor, you’re doing all of those actions.

What are you looking forward to for the industry in 2023?

KT: AI is going to be a tremendous tool for indie authors. What I see happening on the AI front is authors are going to have … the ability to have a competitive edge without increasing their overhead and without having to break their budget. These things are not competing with the traditional creators in that field. Instead, it’s creating a whole new market.

JP: What I hope to see in 2023 is more authors adopting the use of these creative tools as part of their creation process. I think what’s really important to emphasize is that this augments our creativity, and it enhances and, I believe, amplifies our creative vision. What I fully expect is more authors will be using these tools, but the language will change so they might not realize they’re using a lot of this emerging technology.

RN: What I am excited for in 2023 and 2024 and beyond is people taking control of their authorship and saying, “My book is objectively good. It reads well, it has a good cover, has a good blurb. It has a good look inside; the formatting is good.” I’m hoping that we’re going to come to a point where people say enough is enough; I’m going to spend time figuring out what works for me. Maybe this series goes wide. Maybe this series I do on Kickstarter. Maybe this series becomes a serialized book. All of these things sort of allow you to build multiple income streams and be less reliant on any one thing to succeed.

What should new authors know ahead of the new year?

KT: Don’t be afraid to try things; don’t be afraid to experiment. Don’t limit yourself based on what you think the industry is. Go out and find that segment of the market that appeals to you the most, and if it doesn’t exist, write the book anyway and see if you can invent it. This is a very exciting time for indie publishing. We’ve never had so many resources and so many opportunities. It’s just going to keep getting better.

JP: The sort of question for new writers is how are you going to write and how are you going to reach readers? … There are so many options, but the main thing is to find what works for you and your book. … Another tip is to be very careful what contracts you sign, regardless of whether those contracts are with independent companies or traditional publishers because a lot of these contracts will stop you from making the most of the possibilities in the future.

RN: If you’re willing to build better habits and take longer to grow and learn more profitable marketing tactics, in the long run, you’ll be better off for it. We always talk about Kickstarter and Patreon and wide platforms and direct sales and all of these things. They’re not as easy as putting a book on Kindle Unlimited; it takes uploading more places, figuring out what works for you, trying fiction apps, and all the other things that work. But once you develop the system that works for you, you develop those good marketing habits at the beginning, then the long term becomes easier for you.

Q: What do you enjoy about being part of the indie author community?

JP: It’s the focus on creative independence that I value. Creative and financial independence is really what we’re about, so being part of that is exciting because there’s always something new to learn. Being part of the community keeps pushing me.

RN: Indie authors are so supportive in a way that most entrepreneurs are not. Whenever I go into an author community, they’re all so excited about story and new books that are coming out, whether it’s theirs or other people’s. I find that so comforting. Coming from a world of other entrepreneurs where it’s more like, “How can I or my group of friends dominate everything else?” to go be in a community where everyone is trying to pull everyone up is incredible.