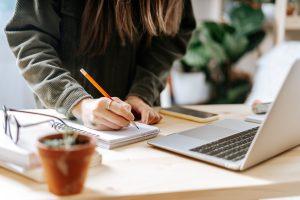 A character death. A final goodbye. A heartfelt reunion. The end of a journey. It doesn’t necessarily matter the specific plot points that elicit the emotion nor is genre or artistic medium all that important. But scroll through recommendations on BookTok or consider the moments from a favorite series that have stuck with you the longest, and the phenomenon is plain to see. Almost inexplicably, readers enjoy reading books that make them cry.

It’s not just tears, of course. Any emotions that can echo from somewhere on the page out to your readers in the real world are powerful. Aristotle called the concept “the paradox of tragedy.” According to him—and the philosophers and storytellers who’ve pondered the idea since—audiences like experiencing emotions, be they happy, sad, or something in between.

But what’s the secret to writing them?

Characters. More specifically, character arcs. A character’s inner transformation over the course of a story has the potential to shape the plot and prove its significance, according to Kristen Kieffer’s writing craft blog, Well-Storied (https://www.well-storied.com). Write it well, and that character will provide emotional weight for readers over the course of your story—maybe even enough for them to feel those emotions themselves.

“In my view, character arc is the ‘demonstration’ of a story’s theme as executed through the plot,” writes novelist and writing teacher K.M. Weiland. “Character arc ties it all together, providing both forward movement in the external plot and meaning through the theme.” In her book Creating Character Arcs: The Masterful Author’s Guide to Uniting Story Structure, Weiland details the three types of character arcs. But not every protagonist will follow the same arc, and deciding which arcs fit your characters involves understanding not just the events they face but also how they will ultimately be shaped by them.

Arguably the easiest to recognize and most well-known, a positive arc traces a character’s journey in overcoming a dark outlook on life or an internal fear to come to a more positive belief. In Weiland’s book, she addresses these initial and changed outlooks as “the lie” and “the truth,” respectively. Characters with positive arcs start out believing a lie about themselves or the world around them but, through the course of the story, are able to overcome that lie and discover a truth that is ultimately freeing.

Positive arcs are easy to spot among protagonists in today’s stories, especially for characters who seek to grow into a new role in society or who face adversity over the course of a novel and rise above it. They might be easiest to spot in coming-of-age novels or fantasy epics that feature a “chosen one” trope. But not every positive arc has to be wielded by a main character—side characters and even antagonists can experience the same moral growth as long as they end the story with a more positive outlook than they had when it began.

Just as some characters rise, so do other characters fall. That’s the case with characters with negative arcs, who often start a novel believing a lie about themselves or the world, similar to those with positive arcs. However, rather than settling on a more positive belief, these characters end their arc with the realization of a more negative truth—or sometimes a separate, even worse lie, according to the Writing Cooperative (https://writingcooperative.com). This arc is often seen with antagonists, but that’s not always the case.

In the same way that antagonists can follow positive arcs, many famous protagonists become the “tragic heroes” who follow negative arcs. The terms “protagonist” and “antagonist” are morally neutral, writes Weiland, meaning characters aren’t automatically required to follow a certain character arc simply because of the role they play in a story. “We often find protagonists undergoing ‘negative’ arcs leading either to disillusionment or even moral degradation while antagonists can sometimes be the most ‘positive’ or ‘moral’ characters in the story.”

In her book, Weiland defined negative arcs further by creating subcategories such as “disillusionment” and “corruption.” Initially, she believed there were simply more ways of “doing things wrong,” she writes. However, now, she prefers to approach all arcs as part of a spectrum. “Ultimately, the characterizations here are just describing the various ways people interact with the transition from an outdated perspective to a new and more functional perspective.” Even characters with morally gray outlooks can have net positive or net negative arcs as long as their beliefs change slightly for the better or for the worse, respectively.

But what about characters whose viewpoints don’t change?

3. Flat Arc: The Tried and True

Not every character changes viewpoints over the course of a story, but that doesn’t necessarily mean they exist without an arc. Characters whose beliefs are tested but ultimately do not waver are said to have flat arcs, and though their outlooks don’t change by the resolution of their arcs, they’re far from static, according to iWriterly (https://iwriterly.com).

The key difference is doubt, Weiland writes. On her writing blog, Helping Writers Become Authors, she explains that characters with flat arcs still grapple with a lie and a truth. These characters already possess the truth, but as the story goes on, they must begin to doubt their truth in favor of the lie that others around them believe. By the end of the story, however, they should be able to return to their initial truth, more resolved and steadfast than before.

The flat arc is especially common in episodic stories, such as those in Cozy Mystery or Thriller genres. It’s also frequently seen among established superheroes—though a superhero’s origin story can sometimes involve a positive arc instead. In fact, when it comes to characters in a series, Weiland suggests multiple ways of considering their arcs: as individual arcs to be contained within each book, as large overarching arcs to develop over the course of an entire series, or, she writes on her blog, as a combination of the two. Creating multiple small arcs to be contained within a larger arc over the course of a series, she writes, has the potential to add even more depth and complexity to your character—and to make your story even more memorable for your readers.

Three arc types might feel constricting, and some writing guides include additional arcs, such as the transformation arc, for stories in which authors struggle to assign strictly positive, negative, or flat arcs to their characters. But Weiland finds that those additional arc classifications are often variations on the main three, which are broadly defined on purpose. “There are endless varieties on a theme, and exceptions to every rule,” she writes. “I do find that most stories fit into one of those categories, and they usually resonate most strongly when they align the character’s transformation properly to the story’s structure.”

Ultimately, finding your characters’ arcs might still take some time. But the best way to understand and internalize the arc structures, Weiland writes, “is to study them in your favorite books and movies.” Perfecting your characters’ arcs can’t guarantee a bestseller—in this industry, nothing is ever quite that definitive. But paying as much attention to each character’s inner journey as you do to their physical odyssey could be just the detail that moves your story from good to worthy of your readers’ real-world emotions.