A Tale of Three Presses: Lessons in Finding A Path to Your Dream Publishing House 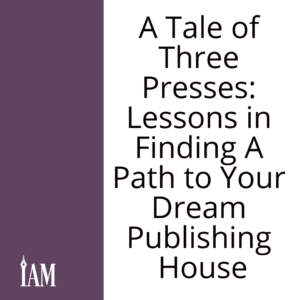 Children’s author, Marti Dumas (https://martidumasbooks.com) is an indie publisher who started her career with a clear mission: to provide specific books for specific readers. In some ways, her mission hasn’t changed at all. When her six-year-old ran out of books and started taking Jonathan Swift off the family bookcase, Dumas decided to write an age-appropriate book as a Christmas-turned-Kwanzaa present. Her daughter loved Jala and the Wolves and shared it with the neighborhood. Of course, when the younger child turned six, he also wanted his own personal book.

There was only one problem.

As an educator, Dumas knew that her youngest needed a different kind of book. “He needed something that was … specifically for kids like him. … Preferably brown, but not necessarily,” she says. The book needed to match his love for science, his humor, and his search for adventure. But the answer posed a different sort of challenge for Dumas.

“[I realized] ‘Oh, but I can’t actually write this because the actual correct book for him would need to be … an illustrated chapter book,’” Dumas says. If the book needed artwork, she’d need collaborators to bring it to life.

Thankfully, she wasn’t the only person who recognized a need for the book. “Things happened,” Dumas says, in her understated way, “people put money in, and we ended up forming a small mission-driven press, which is Plum Street Press that publishes books that feature children of color, where race is not the conflict in the story.” The time to start a publishing house came when its scope grew big enough to include new partners—a short while later, the New Orleans-based boutique children’s book press was born.

Dumas’ path into the book world might seem unorthodox to some, but her ever-growing list of roles and titles today speaks to her success. From becoming a co-owner of a publishing house in order to release her debut book to finding a home for her later series with traditional publishers, her story also offers a lesson to other authors who seek to follow in her footsteps: namely, that there aren’t always footsteps to follow.

Most authors don’t begin their indie author careers with the business side, but Dumas had a clear vision for her work, a healthy network of friends, and an impressive set of skills. “I am a teacher and also a consultant and an organizer,” she says. “So … the idea of making a company that doesn’t have a specific mission seems foolish to me.” She chose her direction and stuck with it, and in 2017, she gave a podcast interview about forming Plum Street Press (https://plumstreetpressbooks.com) to publish Jala and the Wolves and the Jaden Toussaint, the Greatest series.

Her deep understanding of her target audience might be one key to her ongoing motivation. “I was a classroom teacher for thirteen years, and ten of those are in elementary school,” she says. “That is my sweet spot for fiction because [fourth and fifth grade is] it’s perfectly middle grade.”

Finding books for the kids in her classroom fine-tuned her ability to choose strong story ideas, both in her own writing and the books she publishes through her press. “That’s almost always where my stories start … [with] a kid that I know who needed a story.”

Dumas’ experience in the book world doesn’t stop with her own author career or even with Plum Street Press. As an audiobook narrator who speaks English and French and handles a variety of dialects and accents, Dumas has other skills and connections to the publishing universe. Although not looking for an agent, she met one at a friend’s party who asked her to submit—then asked again a few months later when Dumas, thinking the offer was polite conversation, hadn’t followed through. After all, why would a successful indie author and co-owner of a publishing house choose to go back into the query trenches?

She knew she would have to have just the right project, because some manuscripts need more creative control than others. Dumas says, “My Seeds of Magic series I would never have submitted because I am completely uninterested in anyone else’s opinion on that story.” But when she started working on a different series, Wildseed Witch, she realized she would be willing to share creative control over the new story. [This project] could use other eyes … maybe shaping the direction that the story might go,” she says. “And I just wanted to see what that [traditional publishing] process was like.”

Although willing to invite other perspectives into her creative process, Dumas is working from a position of strength because of her experience as an indie author. “[To publish traditionally] you need a project that you’re like ‘I’m totally willing to collaborate but also I can do it on my own’ because you don’t know what kind of editor you are going to get.”

How Much Control Do You Need?

In a surprising plot twist, publishing traditionally turns out to be another way Plum Street Press achieves its mission. “It’s very important to me and the other people who invested in the Plum Street Press for us to make the books as easily available to all kids as possible,” Dumas says. “That means being in as many venues as possible, which means taking down as many invisible walls as we can between us and the venues.” A traditionally published book is eligible for awards, editorial reviews, and other forms of recognition that may encourage libraries, schools, and parents to purchase it for their collections. But that recognition may be impossible for an indie author or a boutique publisher like Plum Street Press.

Dumas is a co-owner of her publishing company, but as an author/publisher with successful books, it makes sense to pursue a broader audience with a mainstream publisher. As Dumas says, “knowing why you’re doing the thing … is really important because you’re going to have missteps. You’re going to have things that don’t go quite the direction that you thought or you’re going to try a foray with big pub, and maybe you don’t love it. I’m so far okay, but at any moment I could … be like … ‘I don’t want to deal with this ever again.’ But I know that I’m not going to quit writing books for kids and publishing them because I have a reason to be doing it.”

With Dumas’ current publishing deals with both Amulet and Scholastic, the potential for taking down invisible walls is high. Last year, Amulet—the publisher of the popular middle

grade series Diary of a Wimpy Kid—published the first book in Dumas’ Wildseed Witch series, with book two set to release in May 2023. Meanwhile, Dumas’ nonfiction title, Women in the Old West, is backed by the one hundred-year-old publisher, Scholastic, famous for school fundraisers in the form of in-school book fairs in the United States. The ethos of Scholastic in particular aligns with the Plum Street Press mission. As reported by Publishing Perspectives, the President and CEO of Scholastic, Peter Warwick, spoke at last month’s Frankfurt Book Fair about the importance of marketing diverse books: “As publishers, we must avoid saying ‘We need to publish diverse books’ and then put them into a separate section and market them less. We need to say, ‘This is part of our mainstream, and make sure that we market them effectively.’”

As a successful indie author and publisher, Dumas has a completely different relationship with her “big pub” houses than the typical debut author. “It makes a way better time for me to try it and see what it’s all about. Because I don’t actually have a fear of being ostracized from publishing because I was never in,” she says. “I’m doing my own thing, and I’m not going to stop because I have a very focused mission.”

“I think that there is a lot to be learned from working with big publishers,” Dumas continues, adding that “some … are reinforcements of lessons that I thought that I already had.” For example, for authors doing a “foray into big publishing, you are going to need to know how to market your books, because even when they’re marketing your books, you are the biggest asset to them, not your books.”

Looking back at the growth of Plum Street Press, Dumas would tell her past self to outsource tasks earlier. As an educator, she enjoyed learning new skills, and she still thinks it’s valuable to be familiar with the tasks you are outsourcing, but not an expert, adding that “you should be like a ten of diamonds of all trades just so that you can supervise people that you hire.”

She also advised that indie authors learn “the secret nods and whistles” of the publishing industry to keep your books from being immediately discarded by the audiences you’re trying to reach. “For example,” Dumas says, “Tuesday is pub day. When you release your book on a different day, you signal to all the librarians and schools that your book isn’t a traditionally published book.” The advice goes for authors who write for all genres and age groups—bookstores like Kobo pay attention to your publish date as well.

Most importantly, authors and publishers need to understand the expectations they’re setting for their readers with every project they take on. Ironically, Dumas had to make the publishing case for her Seeds of Magic series for grades three through six to her own publishing house. The other co-owners of Plum Street Press expected her to write more books similar to her original Jaden Toussaint series. Dumas had to demonstrate that her new books were a “smart expansion of the brand” and fit the original mission of Plum Street Press. To a solo indie author, it might seem pointless to go through this kind of traditional publishing exercise, but it got everyone at the press on the same page and helped them support the books together. This cohesion is why literary agents and editors at conferences ask authors, “Why did you write this book?”

Branding isn’t just beneficial for marketing either. Interestingly, as a result of its brand expansion into fantasy genre for slightly older kids, Plum Street Press attracted “more authors to us … who were ready” to publish, Dumas says, “because a lot of times people are excited [about publishing] and they’re pre-ready.” Today, in addition to publishing

Dumas’ books, Plum Street Press publishes middle grade adventures and nonfiction for ages four and up by other authors.

One Mission; Many Paths

Dumas still isn’t following a single path up the publishing mountain. She’s diversifying to take advantage of all opportunities to achieve her publishing mission and serve her audience. Amulet releases Dumas’ Charmed Life, book two in the Wildseed Witch series, on May 2, 2023. Later that month, Book of Dragons, the latest book in Dumas’ Seeds of Magic series, comes out with Plum Street Press. So what’s the target for this wide-thinking author and publisher? “Forty-nine,” she whips out, with a big smile. “Forty-nine books for kids.”

Both Marti Dumas and Darcy Pattison, another children’s book author and publisher, have similar publishing stories: They both bring all their talents, skills, and connections to the publishing table. The message for indie authors is clear: You don’t have to define yourself as an author by the way you publish—even if you have your own publishing house.

Do you want to do everything you can to reach your audience? Or do you want to do it all on your own? There’s no single right answer, just as Marti Dumas’ mind-bending example proves.