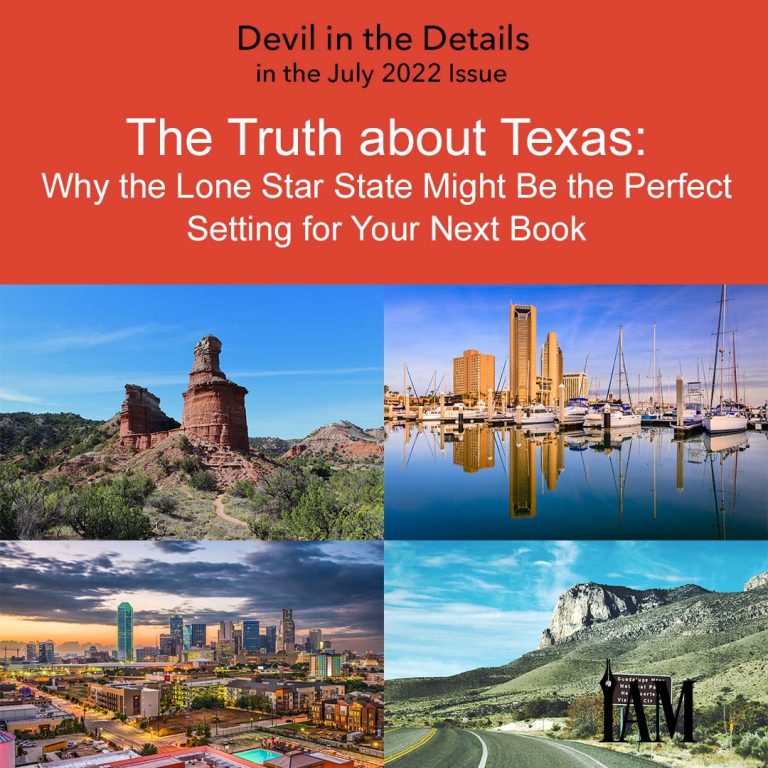 Why Texas Might Be the Perfect Setting for Your Next Book

Texas: It Really Is Like a Whole Other Country

When you think of Texas, a few images might come to mind: cowboys, hot prairies with dusty tumbleweeds, herds of cattle, chuck wagons, horses everywhere, and maybe the Alamo.

As with every American state, these are typical stereotypes with roots in reality. And sure, you’ll find all those things in Texas in some form or fashion. But when authors write about Texas, they could use a lot of imagery beyond the typical.

Need to hide a body in a sand dune? There are 367 miles of shoreline facing the Gulf of Mexico with a chain of seven tropical barrier islands, stretching from Galveston Island to Brazos Island. Rather than tumbleweeds, the lush coastline could be mistaken for any gulf coast town in Florida with plenty of seashells and sandy beaches. Just remember that the sun sets over land rather than sea, so plan your majestic sunset rendezvous accordingly.

Moody, gothic east Texas could be mistaken for Georgia or Louisiana with its moderate rainfall and lush rose gardens. Vampires and other supernaturals could blend in easily, inhabiting antebellum-style homes complete with moss-laden trees and plenty of bogs perfect for midnight roaming. Its piney woods could easily feel like home to a pack of werewolves.

Meet-cutes between rival winery owners need not be confined to California or France. Texas’ Hill Country with its rolling hills, proximity to winding rivers, and ample sunshine has fast become a tourist destination for food and wine enthusiasts, often being compared with Napa Valley.

West Texas is often thought of as the Texas standard with flat, dusty plains and oil derricks dotting the landscape.  It’s dry and arid, but as the saying goes, “If you don’t like the weather, give it a minute.” It can go from sunny to snow in seconds.

The ecoregions of Texas offer new possibilities for settings, and these are just a few of the more obvious options designed to spark your imagination.

It Takes a While to Get from A to B

Texas lives up to its reputation as a big state, and it might be easy to mistake how long a character realistically needs to get from one city to another. The following map will give you a better perspective.

If Texas were its own country, it would be the fortieth largest, and larger than every country in Europe, according to TexasProud.com.

The longest line from north to south through the state as the crow flies is 801 miles. That’s nearly two hundred miles longer than the United Kingdom’s longest straight line from Land’s End in England to John O’Groats in Scotland. In fact, nearly three United Kingdoms would fit inside Texas. Moreover, ten countries—Belgium, Czech Republic, Switzerland, Austria, Slovakia, Slovenia, Macedonia, Luxembourg, Hungary, and the Netherlands—could fit inside Texas without overlapping.

Traveling anywhere in Texas takes time. If you’re writing about getting around Texas, bear in mind no central transportation system or railway connects the state’s major cities of Dallas/Ft. Worth, Austin, San Antonio, or Houston. To get from A to B, one must drive, often on what are known as farm-to-market, or “FM,” roads. These roads were designed for what their name implies—getting from rural farms and ranches to markets, meaning that it’s not a straight shot between places once you’re off the main highways.

Pro Tip: Use driving distance calculators to accurately describe the time it takes to travel within the state.

Think outside the Big Box

The geographical diversity and sheer size of Texas could make it an interesting setting in an author’s work if one looks beyond the typical. There’s more than enough to work with to ensure you keep readers engaged—just be sure to get the details right. True Texans will notice if you don’t—you can hang your cowboy hat on that.