The Daily Habits of Seven-Figure Authors 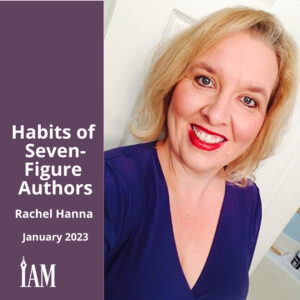 What author doesn’t dream of becoming a millionaire? Every writer wishes to have a tremendous income straight from their books, along with thousands of adoring readers. The mountain it takes to achieve such a pinnacle, however, can seem long and daunting, especially to authors who struggle to sell single copies of their title. These elusive writers who have such exceptional careers seem so high above the average traditionally published author, who, according to the Authors Guild’s 2018 Author Income Survey, is likely to make twelve thousand dollars a year or less. So are there secret habits to success that these millionaire authors have discovered?

Rachel Hanna is willing to share her story. She is a successful seven-figure author of Women’s Fiction. She writes Southern Romance books that center on stories about family and friendships, with characters who range in age from teenagers to middle-aged adults to characters in their eighties. “Older characters have interesting things going on in their lives, too, so I try to highlight them,” she says. “It’s not true, at least not for me, that you have to center your story around a young twenty-something.” To date, her backlist includes almost forty books.

Hanna has a degree in journalism and worked in that field before she began working from home in many different areas. She was never a big reader but decided to write her first book in 2012 during the Kindle boom.

“I started publishing that same year and started making money,” she says. “Then I had a personal crisis, believing that I wasn’t a professional author, so I started trying to change everything in my business. I lost that momentum.”

She turned to running an eBay business, which she describes as exhausting and frustrating. The job required her to work long hours every day of the week, which wasn’t how she wanted to live her life.

“We were struggling. I hit the point where I was done, and I either had to give up or believe in myself and what I wanted to do. So in 2019, I decided to let everything go and focus on becoming a full-time author,” Hanna says.

She told her husband to move everything eBay related out of her office, so she could use it for writing, and she completely abandoned all other projects in order to pursue a career in Women’s Fiction. The change wasn’t easy. Her backlist wasn’t performing well, and there was no replacement income if her titles failed to sell.

“I didn’t want to give myself a fallback, thinking that if it didn’t work, I’d go back to something else,” Hanna describes, “because if you’re doing that, you’re giving your brain a chance that it won’t pan out, so I didn’t give it any chance.”

She thought about what a full-time author would do every day. She decorated her office like the setting of her novels, printed out a vision board of what she wanted to achieve, and posted notes on income goals everywhere she could see them.

“I tried to surround myself with successful people, who had the things I wanted,” Hanna says. “I read and listened to only uplifting things—happy music, funny movies. I meditated until it put me into a whole different mindset, and that’s what was different this time than all the other times I’d tried to make my author business work before. I looked at other authors doing big things and believed that I could be her.”

One exercise, which she said was very helpful, was imagining herself having a conversation with another person about her success while replying to the conversation out loud. This helped to cement the concept in her head that her dreams could become a reality.

Hanna said she gave herself no option but to be successful, conquering a negative mindset she’d lived with for years. She wrote at restaurants, eating nachos while pantsing her stories and creating long series with multiple books.

“I started saying ‘when this happens,’ instead of ‘if this happens.’ If you write a really good book one, your readers won’t want to leave the world. Now, I’m on book ten, and the series is still going strong,” Hanna says.

Her first major goal was to have a six-figure month in income. After she’d seen an author friend achieve this pinnacle, Hanna set herself on the same path.

“In September of 2019, I was only making around two thousand dollars a month from my books, and that’s when I decided to go full time. By Christmas, we were about to lose our house, but I kept pursuing my dream,” Hanna says. “In March the following year, I had been making thirty thousand dollars a month, and didn’t think I could go higher than that. That’s when I closed all my other businesses to let myself know I was serious. By September of that year, I was making one hundred grand a month, and I’ve made a hundred grand a month ever since.”

According to Hanna, her incredible income is because of her attention to mindset.

“You can have all the business know-how, but if you don’t have a positive mindset, it’s not going to work, or even if you attain that success, you won’t be able to maintain it, because you’ll get impostor syndrome,” Hanna says. “I decided that being a seven-figure author is who I am, and once I did that, the impostor syndrome went away. I didn’t leave any room for this not working out.”

Her habits, in her own words, are scatterbrained yet make for an ingenious recipe for success. Every day is different for her, and she spends her time doing what she feels inspired to do rather than what she feels she must do.

“I am a very fly-by-the-seat-of-my-pants person. The truth is I can go days without writing, then I’ll get inspired and write a few thousand words. When I try to be on a schedule, it stifles my creativity,” Hanna says.

She encourages other authors to work with who they are and what their gifts are instead of attempting to force themselves to adapt habits that don’t work for them. “What messed me up for years was trying to be like other people,” Hanna says. “Every day is different as to what I’m doing. Some days, I’ll work on ads. Other days, I’ll work on building a direct sales system on my website. It’s very dependent on what I feel like doing that day. There’s no set routine.”

Hanna does have a remedy for the days when she is down because, to her, being in a negative place can have the worst effect on her business.

“Sometimes I need a day to rest my mind. I’ll spend the day journaling or watching happy movies because if you’re in an overwhelmed funk, you can’t work well,” Hanna says. “Taking that time really helped because it enabled me to be creative again.”

Hanna said that the most important thing for authors to keep in mind while attempting to grow their career is to have patience and not try to force something into being before its time.

“The fact that people try to force things will slow them down. They get angry it’s not happening in their timeline,” Hanna says. “It took me eight to ten years of writing to get where I am now, and all that time, I was working on my mindset. You can’t give up after a year of getting discouraged. You have to let go of when you think it should happen because you can’t see the bigger picture.”

Detachment from the outcome, according to Hanna, is the key.

“If I had not struggled so much, I wouldn’t have written the book that took off. I would’ve kept being comfortable, and that’s where I got stuck. Put it in front of your face every day what you want to be, and put no thought into when or how it’ll happen because if you hold on to something so tightly, it won’t grow,” Hanna says.

When asked what she wants her fellow writers to know, Hanna says that the most successful author habit any writer can have, above all, is holding on to your dream.

“I turned into the person I wanted to be because there was nowhere else to go. Now we have everything we want,” Hanna says. “I don’t believe in unrealistic goals. Don’t play small and let your thoughts keep you from being successful, because who are you helping? Be as abundant as possible in order to be able to give as much as possible, and believe in yourself.”

Rachel Hanna’s books can be found at https://rachelhannaauthor.com.