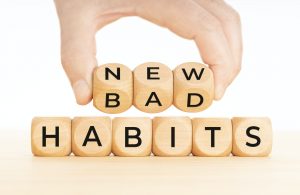 We’ve All Seen The Quote:

“We are what we repeatedly do. Excellence, therefore, is not an act but a habit.”

– Will Durant (Not Aristotle)

Habits are funny things, aren’t they? In Atomic Habits, James Clear defines them as “a routine or practice performed regularly; an automatic response to a specific situation.” There are good habits, and there are bad habits.

I’ve studied habits for the better part of my career, ever since I realized that I have the same number of hours in a day as Beyonce. I’ve always found it inspiring to learn what high performing people do daily, especially if they attribute routines or habits to their success.

Some of them ascribe to waking early, working out, and having a smoothie. Some swear by not checking email until later in the day, and meditation. Others swear by the necessity of making your bed, or practicing yoga.

And of course there’s the habit of wearing the same outfit every day, which is said to reduce decision fatigue.

How Do Habits Impact Indie Authors?

I would never suggest that we all clear out our closets and fill them only with black turtlenecks, but it’s my firm belief that habits are the only difference between a long-term successful career, and an author that gives up, feeling defeated.

Here’s why: it’s not because of the habits you adopt consciously, like daily word counts, a yoga practice, or meditating 20 minutes per day. Although those are great.

It’s Because Of James Clear’s Second Definition Of A Habit.

“… an automatic response to a specific situation.”

Happy, productive writers pay attention to their unconscious habits and make incremental changes to ensure their automatic response to a specific situation is a better choice.

This week, take some time to consider your go-to habits. It might take a couple days of active monitoring to see them, but once you do, think about better responses. Habits take time to make and break, but you won’t be able to start until you’re aware of them and craft your plan to address them.

And then Beyonce better watch out.