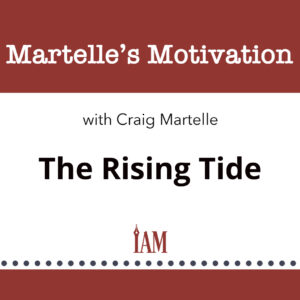 This past month, more than eighteen hundred independent authors gathered at Bally’s Event Center in Las Vegas, Nevada, to learn, to grow, and to celebrate their work as publishing professionals. We welcomed them with messages of inspiration and advice for finding success, however you define it. This month, I want to offer that same welcome to you all.

This is Michael Anderle and I’m Craig Martelle. Welcome to 20Books Vegas.

Welcome to the greatest gathering of independent authors in the world. Look across the sea of people—single drops that create an ocean and a rising tide.

We have doctors and lawyers, retirees, people slaving away at a soul-sucking day job, and even students, still learning what life is all about. A wealth of experience and knowledge is right here, along with the wealth of imagination. The greatness that exists within your minds and the perseverance to put those thoughts on paper and then publish those words, baring your soul before the world.

This reminds me of a quote by Teddy Roosevelt, which is applicable to all.

“It is not the critic who counts; not the man who points out how the strong man stumbles, or where the doer of deeds could have done them better. The credit belongs to the man who is actually in the arena, whose face is marred by dust and sweat and blood; who strives valiantly; who errs, who comes short again and again, because there is no effort without error and shortcoming; but who does actually strive to do the deeds; who knows great enthusiasms, the great devotions; who spends himself in a worthy cause; who at the best knows in the end the triumph of high achievement, and who at the worst, if he fails, at least fails while daring greatly, so that his place shall never be with those cold and timid souls who neither know victory nor defeat.”

The critics don’t matter. Only the readers, those people who vote with their money. They are forgiving if you’ve told a great story, and why wouldn’t it be great? It was great in your mind and great enough that you committed a month of your life, or a year, to get that story down. It was great then. It should be great now.

Whether your imagination or the words you used to portray what you’ve seen in your mind, all of it can get better with practice. Explore within. Shape the words. And then do it again. Practice is the palette before your easel. I won’t stand up here and tell you that any of it is easy. It’s hard. There’s no passive income with being a writer. You have to work at it. As John F. Kennedy said, who, by the way, was the originator of the rising tide quote, “We do this not because it is easy but because it is hard.”

The world will turn whether you turn with it or not. Life moves on, and those who are staying engaged and building a readership for their current books as well as their future books will be the ones who get to slow down and see what the world has to offer.

But always remember why you wanted to write that story. Why did you want to educate unknown people? Because it’s a calling. It’s not a get-rich-quick scheme.

Carl Sagan said, “What an astonishing thing a book is. It’s a flat object made from a tree with flexible parts on which are imprinted lots of funny dark squiggles. But one glance at it and you’re inside the mind of another person, maybe somebody dead for thousands of years. Across the millennia, an author is speaking clearly and silently inside your head, directly to you. Writing is perhaps the greatest of human inventions, binding together people who never knew each other, citizens of distant epochs. Books break the shackles of time. A book is proof that humans are capable of working magic.”

When the end is only the beginning, whole new vistas can open before you. After you’ve finished your book, then the real work starts, but there is nothing like seeing kind words from a stranger about your story, about your nonfiction. How it helped them through a tough time by taking their mind off their own problems or helping them fix their problems. There is nothing like giving people an escape or educating people with the power of your words.

Did you know what you were capable of? Have you already written your best story? I say you haven’t because there’s always the opportunity to do a little better, be a little different. Find a new audience. Why do old golfers keep playing even though they can’t hit the ball as far and can’t walk as fast? It’s the joy of the challenge.

No matter where we are on our journey, we can always look forward. No one has ever reached a peak and said, “there is nowhere left to climb.” No one. The climb isn’t about finishing. It’s about looking back to see how far you’ve come, from an empty page to a chapter to a completed story—to strangers reading it. And starting all over again, but though the page is blank, you’re not starting fresh. You have learned through the words you have massaged before.

Like a seasoned carpenter shapes wood and bends it to their will, a wordsmith weaves the words to build a prism that translates the images from an author’s mind to the mind of the reader, drawing them into the artistry and majesty of the world that you created.

Let’s get to the business at hand: 20Books Vegas. Look at the craft sessions. Look at the business, or the genre, or deeper aspects of publishing, like alternate revenue streams. All of the vendors and industry professionals are here to answer your questions.

The 20Books shows have been described as “life changing.” That’s your investment in yourself because you saw what was possible. Then you grabbed it and held on, refusing to

quit through the hard days, half blind from staring at your screen from a marathon writing session, to often conflicting marketing and promotional ideas when you’ve run out of money before you’ve made any. But you persevere because it’s the only way forward. Stopping isn’t what you started for.

All failure begins with the expectation of success, but failure isn’t final. It’s only a stepping stone to get better. To be better. To join the ranks of those making good money being an author.

Success is a mountain that we all climb in our own way, higher and higher. We’ve found that it’s easier going when we reach a hand back to help someone else.

Because writing is a lonely business, and that’s okay, but sometimes, it’s better to be alone together.

Sharpen your eyeballs, and brace your ears. All of our speakers are well established in their genres and in the industry. Watch and listen and if you can; talk to people because someone here will say something that will truly change your life. You have only to hear it. And who knows, something you say could make a difference too. We’re at different stages in our journeys. And we’re all here for the chance to improve our business—the business of being an author and a publisher.

Be the change you need in your life. Be a part of the rising tide.