Making Music with the Written Word 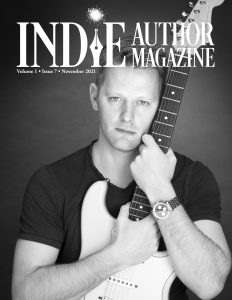 A conversation with the publishing master, Joseph Alexander

“A huge part of life has passed by my window while I’ve been locked inside.”

Joseph Alexander has seen the success many writers dream about. Starting as a classically trained musician, his first guitar tutorial brought with it an income he hadn’t expected. But as he approaches his fortieth birthday, his mentality is shifting while he reflects on the journey that took him from musician, to author, to publisher and what that means for his future and the future of his company.

“I saw Hendrix burning his guitar.” An old BBC recording of a concert featuring legendary guitarist Jimi Hendrix sparked, quite literally, a musical passion in Alexander. Later, a recording by Queen at Live Aid in 1985 cemented the deal, and he quickly turned to his parents for a guitar and lessons of his own. While his classical lessons didn’t result in smashing his instrument against amps, it led him to the electric guitar in high school where he not only played, but began taking students of his own.

His venture into publication would arise out of a difficult stint at the London Guitar Institute. While he stuck out the first year in a program that focused on technique, “It wasn’t about the music.” After a year-long hiatus from education, he found himself at the Leeds Conservatoire. “It was a real community of musicians who went outside and played together.” But even there, he found himself overcoming personal hurdles with his craft. A one-on-one tutoring session with instructor Jiannis Pavlidis broke down Alexander’s ambition into smaller, achievable milestones, a foundation of his future work as an instructor and author of guitar tutorials. When Alexander started documenting his work with his students on the computer, he quickly found there were similarities requiring them to take smaller steps toward big picture changes in their playing.

Originally pursuing traditional publishing, Alexander found there were limitations in their process. Creating a book focused on music requires audio files for the student to listen to, both as exemplars and tracks to play alongside. Despite receiving positive reviews, the publisher commented that the audio would require multiple DVDs to accompany the book and diminish any potential for profit.

Shortly thereafter, somebody made the comment, “You know you can self-publish on Amazon.” And he did. Alexander took control of his destiny by self-publishing and creating a basic WordPress site where he uploaded the MP3s for the readers of his book. He quickly saw people purchasing the book and downloading the files.

When approaching a book, Alexander makes it clear that it is unlike a private lesson, but it falls in line with his personal teaching methodology. While a one-on-one session with a student may allow for tangents and side-conversations, “a book is very linear.” So why books over audio? At the time, this was because of the limitations of audiobooks and the need for students to not only hear but also read the tablature. And while YouTube offers another alternative to books, he opted to stick with the physical nature of books. However, video remains a conversation in the back of his head for a future endeavor. At the moment, his decision comes from the data provided by his students that reinforces that his readers want physical copies.

The success of his publishing company Fundamental Changes isn’t solely reliant on putting out a quality product. Alexander spends upwards of £6,000 per month on AMS ads. “Our spend has gone down recently… I don’t know why, but we’re trying to find out.” His success with Amazon ads landed him a position co-authoring a book on the subject with Mark Dawson. He also says there is an advantage in marketing non-fiction because he can name a book “as boringly clear” as possible. But despite these tidbits that have elevated his brand, he attests that the success of Fundamental Changes is based on the proliferation of more than a hundred books in the last year.

However, Alexander also says for authors releasing books in today’s market, “AMS ads almost have to be part of it.” In more crowded genres, he says using ads is a way to differentiate and rise above and be seen. He admits there are many authors who publish for the love of writing, and he agrees there should be a love in the process itself. But if an author is looking to make this a business, “You need to be willing to invest in your book like it’s a new business.” He adds, “as soon as the writer hat comes off, the marketing hat has to come on.”

Despite having success early in his author career, Alexander maintains a humble outlook on his role as an author and educator. “I don’t have my guitar in my hands a lot these days, which does sadden me. But I’m still a student. I’m not there, I’ve not made it.” This perspective opened the door to allow other talented musicians (and future authors) to take refuge within Fundamental Changes.

With eighteen books into the series, Alexander had run out of content and turned to a friend well-known for his love of playing death metal. Pitching him the concept, Alexander went from author to publisher. He has been adamant that his role in the company is as a partner with the authors. He wants to get their work written, edited, and produced quickly so that they receive royalties as soon as possible. Expanding from guitar, Fundamental Changes now includes books on Bass, Drums, Piano, Woodwinds and Brass, along with writing music for television.

Unlike a fiction novel, a lesson book for students comes with unique challenges, primarily in the formatting. Fundamental Changes has created an in-house style guide to help maintain consistency, but also addresses the limitations of Kindle formatting. While he focuses on the content being valuable to the student, the technical aspect has created a necessity to have pre-made templates where the physical book accounts for the quirks of the e-book formatting. “Our M.O. is to keep it simple. A couple hundred [words] of text, then an example, and repeat.”

Despite publishing more than a hundred books and reaching seven figures, he is reassessing his definition of success. “Financially, that’s enough… I have enough.” He adds, “It [success] can’t happen at the expense of my mental health, it can’t happen at the expense of free time, enjoying my life, and my relationships.” He wants to get outside and focus on having more life experiences. But this doesn’t necessarily mean he is removing himself from the business around publishing. While he plans to continue expanding Fundamental Changes, a surprising opportunity arose from having his books translated into German. Helping connect translators to authors, he created www.translatebooks.com as an extension of Fundamental Changes, and already he is seeing success with a client list that includes Nora Phoenix, Craig Martelle, and JD Kirk. But for Alexander, he has achieved success, and it’s time to process what the future holds for him.