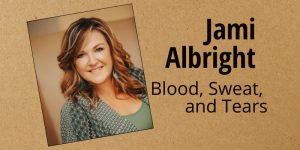 How Hard-won Words Launched Her Career, and What She’s Learned Since

Let me introduce Jami Albright. Every week, authors around the world can catch an hour with Jami on her podcast, “Wish I’d Known Then.” Jami, her co-host Sarah Rosett, and their guests discuss their chosen paths that led them to success in the indie author business.

Jami and I first met in 2017 at the Smarter Artist Summit. Over lunch, authors new to the indie writing scene discussed what we had done to arrive at our varying levels of success. Jami’s story would be the one that stuck with all of us.

She had just launched her first book, Running from a Rock Star, which was resting nicely at the top of the Amazon charts. Jami freely shared that this was a bootstrap project. What she lacked in money, she made up for with heart and soul.

That romantic comedy is still in the top 5,000 in the Amazon store four years later.

Fast forward to April 2021. Jami and I had a chance to catch up via a zoom chat. We revisited that conversation from four years ago. This time I asked deeper questions about the story that stuck, and the subsequent ones, and her approach to the writing process.

Her Story Begins With A Story

Moving is hard on a family. Routines change, friends are far away, and rebuilding takes time. When Jami’s family moved from Austin to Houston, TX, she started reading romance to fill in the gaps created by the transition. Her foray into a new genre began with Twilight, which Jami affectionately called “my gateway drug to romance.” From there, she read other romance novels.

Some would call what happened next fate; others, a sign. Her friend recommended Sugar Daddy by Lisa Kleypas. This was before Kindle e-readers were popular, so Jami was hesitant to buy the book. The opportunity to purchase the book her friend recommended came in the least likely of circumstances.
“Walgreens had the hardback on sale for five dollars. And, I thought, well, it’s right next to the register. I could just get it and get out.” Jami left the store with her new purchase. That book led to making another friend in Barnes and Noble. Jami shared her new find, Sugar Daddy. That friend recommended Susan Elizabeth Phillips’, Nobody’s Baby But Mine.
The newest read was so funny; Jami laughed through tears. It was the first time she had laughed that hard since her move to Houston. “I remember thinking if I can make somebody feel this way, that would be the best thing in the whole world. But even then, I still hadn’t considered writing.”

This experience with a well-written novel would be the impetus for the blood, sweat, and tears story. Years later, as a birthday present for the friend she met in Barnes and Noble, Jami started a novel. She wrote herself into a corner and didn’t finish the story. Still, she shared what she had tried with her friend. Her friend laughed in all the right places and encouraged Jami to continue with the story. They brainstormed ideas for a story that Jami titled Rock My World.

From there, Jami joined a local Romance Writers of America (RWA) chapter to pen the novel. The authors in the chapter and a critique group helped Jami through the writing process. Jami knew she wasn’t strong with grammar. The drive to tell a story that would bring people joy, like Susan Elizabeth Phillips had delivered, pushed Jami to fight through the process. She shared about a time her paper was red with correction marks. Jami said, “I didn’t cry until I got in the car, but I cried all the way home because it was just so hard.” Jami took the tears in stride. She added, “They were hard on me because they could see that I could tell a story.”

It took years, but she finished the novel.

We’ve seen the tears. We’ve seen the sweat. Now we see the third piece of the idiom come to fruition—the blood. Before Jamie clocked in for work, she visited the local blood bank to sell plasma to raise money for an editor. She went as early as 4:30 a.m. because there were fewer people in line, reducing the wait time. This time I asked the big why. Why would Jami go to such an extreme?

She wrote with a purpose.

“I write with the intent of making my readers’ world a little bit better for a little while.” She didn’t want her grammar or syntax to interfere with the story. If it meant selling blood to pay for an editor, that’s what she would do.

Years later, Rock My World would be published as Running from a Rock Star.

How has the experience of Running from a Rock Star shaped Jami’s writing process? Since then, Jami has published one novel a year. Each story goes through five rounds.

Jami replied that at the beginning of her writing career, she shared her work with critique partners. Now a more experienced author, she draws on instinct to help her determine if her work in progress will connect with the reader. “I know I have a problem when I am writing, and I’m bored or feel like I’m rambling. I just got rid of 5,000 words or two chapters. It was like nobody was listening. Not even me. So I went back and read it and thought, ‘yeah, that doesn’t need to be in there.’”

Jami also shared that she’ll grumble about her story, “I’ll say, ‘oh, this is horrible.’ And my daughter will say, ‘oh, you’re at that point in the process.’” In other words, thinking a story is horrible is a universal reaction. Jami presses through and does her best to deliver something her readers will enjoy.

Four years, several books, speaking engagements, and a podcast under her belt, Jami has accomplished yet another feat—she inspires authors. When we discussed questions she hears on the podcast, she shared that it is interesting hearing questions we’ve forgotten about or the answers have changed since we started writing.

In other words, an editing loop can easily pull in the well-intentioned author. The means of extraction are simple. Move forward with the plot.
For authors later in their careers, she acknowledged that writing is still a struggle “We don’t want to reach for that low hanging fruit. We’re always trying to get better.” To them, she said, “Don’t let that cripple you.” It was an ‘aha’ moment where both of us stopped talking for a moment to jot a reminder.

Jami and I talked for another hour about writing, our families, and how the pandemic changed our approach to both writing and family. The conversation ended too soon, but we had to go. Our families wanted supper. Before I left my writer’s desk, I wrote another Jami quote. It captures the heart of every writer and explains why she worked so hard in the beginning to share her story.

“I wanted to make people laugh and lighten their load. I do it through writing.”