From San Diego to Scotland, Tameri Etherton Dazzles with Her Self-Made Author Career 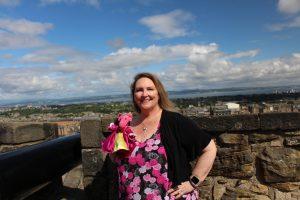 Tameri Etherton discovered she was a natural storyteller when she was six.

“I have three older siblings and then a stepsister who was four months younger than me, and we’d go camping a lot,” she says. “And I would be the one telling stories around the fire. And I realized I had a gift for storytelling, and it entertained people and it made them feel things.”

Like many writers, the discovery that her words moved readers emotionally was a heavy hit of dopamine, and little Tameri was hooked. The transition from family storyteller to writer came later.

“In high school, I had an honors English teacher who was like, ‘You need to do something with this,’” she says. “And she really made me feel for the first time that I could do it, that I was a good writer.”

Tameri and I are chatting via Zoom on a Saturday afternoon. I’m in Texas, and she’s in Edinburgh, Scotland. Full disclosure—she and I have been in an online group for the better part of a year: part book club, part writing technique dissection and discussion. We met at 2019’s 20BooksTo50K® conference in Edinburgh, so this is less a formal interview and more a chat with a friend who fascinates and inspires me with her work ethic and inquisitive passion for perfecting her craft. I’ve come to know her as someone who asks thoughtful questions and gives and receives criticism generously, which is one reason we both agree her career as a full-time indie author has taken off.

Her career has taken her and husband, Dave, around the world, from their native sunny San Diego to now beloved Scotland, relocating permanently in 2015 with the blessing of their adult children. She says she accidentally manifested this after visiting several times over the course of a decade with the kids while Dave was working. When Dave’s company had an opening, he asked her how long he should commit to working in Scotland, thinking it would be temporary and they would go back and forth between the United States and the United Kingdom.

Temporary became permanent when they bought their central Edinburgh home less than a year later. After looking at hundreds of places to fulfill her “princess demands,” Tameri says, the couple found one that ticked all the boxes with a view of the castle and within walking distance of Dave’s work.

Lady Dazzleton Has Entered the Chat

We mustn’t forget the real subject of this interview: a pink stuffed dragon named Lady Dazzleton currently perched awkwardly on Tameri’s shoulder, her constant companion on adventures around Scotland and points beyond. You’ll see “Lady D” more than Tameri and Dave in photos on her social media account, as the fabulous dragon serves as both avatar and alter ego.

“I had a fabulous web goddess … who made my logo, and it’s a little teacup with a dragon on it,” Tameri says. “We called her ‘Lady,’ and she was pink and sparkly. And then one day, I found Lady Dazzleton.”

Lady Dazzleton will have her own series eventually, but for now, she’s an outlet—and part-time scapegoat—for mischief.

“She’s a hard-drinking, hard-loving, leave-him-in-the-morning dragon,” Tameri quips. “Her book will be titled The Mis-Adventures of Lady D.”

Since Lady D is the instigator of shenanigans, I ask if she’s the one to carry the bail money in case one of their adventures goes south, and with a laugh, she tells me the money stays with humans. Even though Lady D could technically fly out of her hypothetical jail cell, she says, she would stick around to hear the stories so she could relay them to Tameri later to write down.

Finding Her Own Voice

Tameri’s first novel was written without the help of her incident-causing friend. After graduating from college with a degree in literature and writing, she planned to go into teaching after one of her professors discouraged her from writing what she loved to read, which he referred to as genre fiction. Tameri says he meant that as an insult.

Tameri put any idea of writing professionally away and focused on raising her two young children. But the seed of blending romance and fantasy was already planted.

“My mother is a voracious romance reader,” she says. “She could have opened a used bookstore with all of her books. She had, I think [at] last count, six thousand. And so I grew up reading romance, and then I went into fantasy.”

She was a frequent volunteer at her children’s schools. When her youngest started third grade at a new school, Tameri was told they didn’t have volunteers. She struggled with a two-month depression because of the change.

“I seriously did not know who I was because I had put my entire soul into raising these two little humans for fifteen years.”

Her husband asked, “Why don’t you write that book that you always talk about?”

Seven years later, she found herself still grappling with finishing the story, making the mistake of going to general critique groups and not Fantasy-loving critique groups. Every week, they had her rewrite chapter one, which she did some forty times before finally deciding to push through a different way. She hired a developmental editor in 2012, joined Romance Writers of America, and started learning about self-publishing.

“At the time, traditional publishing was the thing everybody had to do to be legitimate. And then there are people like Bella Andre and Marie Force, and they actually came, and they spoke at RWA San Diego. And I heard how you could make this happen, and you don’t need [traditional] publishers.”

She calls that first book “the book of my heart” but admits she still had a lot to learn to make it commercially viable.The cover was “old school” and mimicked writers she loved, but it didn’t match readers’ expectations. She changed the cover and the title when she received feedback that it “didn’t mean anything” to them.

Learning and adapting has become a pillar of her career, and she notes some things she learned ten years ago weren’t lessons she was ready for. Now she’ll reread a book and the concepts make total sense, but she’s careful not to embrace every new idea.

She says the biggest lessons she’s learned have been to be adaptable, to be ready to pivot, and to not consider anything she writes too precious. “At the end of the day, it’s a product,” she says. “It’s not my baby. It was my baby when I was writing it, but the minute I published it, it belonged to the readers.”

Despite the book belonging to the readers, she refuses to write by committee, preferring to first have five or six readers read through the first draft with instructions to give her “the harshest criticism” they can. She then takes that criticism and wades through changes she’s prepared to make to her story.

The Benefits of Conferences

Tameri is a confirmed extrovert, and the isolation during the pandemic was especially hard. Conferences are a welcome return, and she attended three in June. Just being with people, she says, recharges her and has done a lot to combat the depression and burnout she’s experienced.

On the business side, she finds the benefits of connecting with other authors priceless.

“I can’t write fast enough for just my readers,” she says. “I want my readers to be your readers too. Something I love so much is when I go to these conferences, finding other authors that I can introduce to my readers.”

On Success and Future Plans

When asked what’s next for her career, she quickly replies, “I have world domination in my planner,” admitting that she’ll need to work up to that. She likes Joanna Penn’s philosophy of being “quietly successful” and living her best life without the trappings of fame.

Her motivation remains clear: She wants to continue to entertain and tell stories.

“The beautiful thing about this gig is that we don’t have to stop. We can keep writing until we just stop and keel over,” she says.

It goes without saying that if that happens, Lady Dazzleton’s alibi should be verified by the authorities.