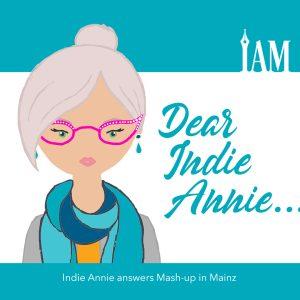 I have a great idea, or at least I think it is, for a series of books that would be a mash-up of a couple of other famous series. I wouldn’t use the same characters or world, but the plots would be somewhat similar. But then I wonder if I shouldn’t bother because it’s been done before. Should I write my idea or try to find something completely original?

How thrilling it is to hear from you. I love your question. No, really, I do because this dilemma is one that has faced writers since we first put pen to paper or even chisel to stone.

As our ancestors gathered around open fires telling epic sagas of heroines battling dragons, do we think they cared if their history borrowed themes, tropes, or plotlines from other legends? Obviously, we can’t answer that question for sure, but I am pretty certain that the answer is a flat no. In fact, I am going to stick my blue-silk-scarfed neck out here and suggest that they welcomed the opportunity to improve their stories with outside influences.

The term “mash-up,” according to the Oxford English Dictionary, is a “mixture or fusion of disparate elements.” Although the entry states it is a term that was rarely used until the twentieth century, there is at least one reference to a “mash-up” in 1859. The reference is from Boucicault’s Octoroon, which has a line that goes, “He don’t understand; he speaks a mash up of Indian, French, and Mexican.”

I adore that line because it encapsulates exactly what a mash-up really is. A mash-up is evolution.

A mash-up is how we, as humans, have developed—through mixing up language and ideas. The term might be modern, but the concept is as old as time.

Homo sapiens have been on this planet for around two hundred thousand years. Therefore, as a species, we have been talking and sharing and telling stories for millennia. Do you really think you can come up with a story that is completely unique? Seems pretty arrogant to me to think that you can.

So take a leaf out of George Lucas’s playbook, a well-worn story arc, e.g., the hero’s journey. Add in some proven tropes—in his case, good versus evil as a Western-style showdown, right down to the goodies and baddies in white and black outfits. And set the saga in a galaxy far, far away. I could spend many columns unpacking all the ideas Lucas adapted from classical storytelling, folklore, and popular culture, but plenty of books and online fora have already done that much better than I.

And it’s not just Star Wars. Consider how the Harry Potter series took ancient myths and weaved them into a wizarding world—and may or may not have stolen several ideas from the Lord of the Rings or even Malory Towers! Or how West Side Story is a revamped musical version of Shakespeare’s Romeo and Juliet. And we all know good ole Shakespeare himself wasn’t afraid of a mash-up of his own. He found inspiration in Greek and Roman legends and contemporary books and plays. In turn, Shakespeare’s work inspired others. Aldous Huxley’s Brave New World is modeled on Shakespeare’s The Tempest. Macbeth inspired The Talented Mr. Ripley by Patricia Highsmith. Frederick Forsyth’s The Dogs of War has a lot in common with the bard’s version of the life of Julius Caesar. The list goes on and on.

The thing is, the greatest stories speak to us of the human condition, of the trials and challenges, hopes and dreams of our kind. We all want to see the hero emerge victorious at the end of their quest, whether that is to return a ring to the fiery pits of hell or return a faulty toaster. We also want things to work out for the cute couple who met by chance on the station platform, in the coffee shop, or in the gladiatorial training academy of some post-apocalyptic world. And we all want the baddie to come to a sticky end. My favorite is the truck of manure emptying its contents over the bully Biff and his convertible in Back to the Future, but you may prefer seeing your MC’s nemesis being blown apart by the last shot from a homemade catapult or by falling on their own laser sword.

So, dear friend, you are following along a path well trodden by other writers, past and present. Do not be afraid. Mash away.