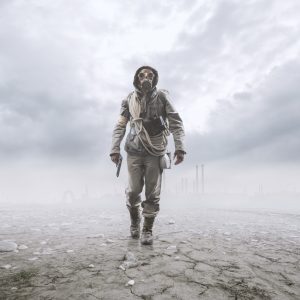 What do you do when the world ends? Rebuild it.

Some people confuse Post-Apocalyptic and Dystopian stories, but they have distinct requirements. Young Adult Dystopian is a subset of Dystopian with further specific expectations.

When it comes to YA Dystopian fiction, a corrupt government or society that rose to power after a vague unexplained catastrophe is arguably one of the most important tropes. Dystopian stories often take place decades or centuries after an apocalyptic event or war, but during that time, society has had time to rebuild, and a new – often corrupt – government rises up from the rubble.

While worldbuilding and showing the strict laws and the new world order is important, YA Dystopian fiction places less emphasis on the shocking aspects of the society. Rather, it focuses on the place of the main character (often a teenage girl) in the new society. As readers, we observe how the protagonist reacts to the trials and hardships thrown their way. This allows us to truly connect with the character in a gritty, unjust new world, making this one of the hallmarks of the genre.

The protagonist of these types of stories is usually a teenage girl (The Hunger Games, Divergent), but not always – the Legend series utilizes a dual POV (teenage girl and boy), while in The Maze Runner, the protagonist is a teenage boy. In each of these stories, the protagonists frequently come from poverty – they’ve endured far more hardships in their short lives than any teenager should. Katniss (The Hunger Games) is an underdog: she comes from District 12, the poorest District, which almost never wins the Games.) In The Maze Runner, every single member of the group that is thrust into the maze is an underdog. Yet, these characters have something in common: they are all strong-willed survivors, fiercely loyal to the ones they love. This makes their stories so fulfilling.

A dangerous test, arena, or challenge

This is a very commonly used trope in YA Dystopian fiction. Our protagonists are often faced with tests or trials to prove their worth. In The Hunger Games, the tributes are thrown into an arena and fight to the death. In Divergent, Tris first took the aptitude test to determine which faction she belongs to, before making her choice in the Choosing Ceremony. In The Maze Runner, the whole maze is a trial.

A class or faction system is often featured to show the difference between those with status and those without it, highlighting the inherent inequalities of the system. In The Hunger Games, we have the poor Districts, struggling to survive, juxtaposed with the pompous fashion of the Capitol. In Divergent, we have the five Factions as well as the “factionless”—the outcasts of the society. In Legend, the two protagonists are from different classes, showing the stark differences between their two worlds.

Rebellion against the status quo

Rebellion is a key trope in YA Dystopian stories. An organized war, a large rebellion against the system, coupled with a high body count, scenes of constant upheaval and the turbulence of war. The protagonist is usually the (at first) reluctant face of the rebellion. Their actions spark wider societal change as they become the symbol of the resistance.

While this trope has been the subject of many jokes and memes, very often a love triangle is present. But hey—these memes have to come from somewhere! The classic example here is The Hunger Games, but there was also a love triangle in the Uglies series. In Legend, there’s even a temporary love quadrant, showing that the main characters come from different worlds and might be better suited to others. Out of this list, the love triangle is one trope that writers of YA Dystopias can easily leave out, but the thread of romance should be included.

If you’re ready for a face-off between a plucky young hero or heroine and a corrupt system, YA Dystopia might just be the genre for you.