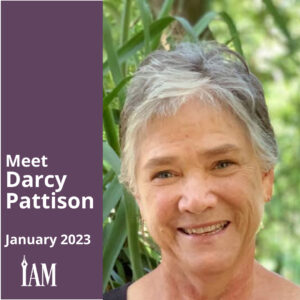 Ten years ago, children’s author Darcy Pattison faced a dilemma. After publishing with multiple traditional publishers—Lothrup, Lee & Shepard; Harcourt Inc.; Sylvan Dell Publishers; Philomel; and Stone Arch Books—from 1991 to 2011, she couldn’t find the right home for a nonfiction picture book about the oldest bird in the world. Publishers she approached wanted to make a book about the bird or about the people, but no one shared her vision for the book. So she decided to find a new way to bring this story to life, and enticed an illustrator friend, Kitty Harvill, to collaborate by sending her “visual material” until she fell in love with the albatross too.

Then, they brought the book to market themselves.

After Pattison published Wisdom: The Midway Albatross in 2013, the book won a national award—first place in Writer’s Digest’s 20th Annual Self-Published Book Awards—and earned a coveted starred review in Publishers Weekly. Recognized for years as a knowledgeable and generous author and writing teacher, Pattison became an award-winning publisher as well.

That decision would become just the first step on an entirely new path in Pattison’s career. After taking WMG Publishing’s Master Business Class (https://wmgworkshops.com) from Kristine Kathryn Rusch and Dean Wesley Smith on building a publishing business, Pattison bought a thousand ISBNs, a commitment that’s carried her to where she is today. “It was a line in the sand,” she says. “I’m going to do this, and I’m not going to look back.”

Nearly a decade later, the hard-working owner of the publishing company Mims House (https://mimshousebooks.com) has followed up her earlier success with a National Council of Teachers of English Notable Children’s Book Award in 2018; National Science Teaching Association Outstanding Science Trade Book awards in 2015, 2017, 2019, and 2020; and a Notable Social Studies Trade Book Award in 2021. Her award-winning books are popular with readers too. A Little Bit of Dinosaur reached one and a half million reads on the Epic! reading app, popular with schools and families.

Among indie authors, Pattison is well known for her ability to find new publishing opportunities. It’s one of her many superpowers, as well as one that’s helped her navigate the challenging world of children’s publishing. “I really try for excellence,” she says.

Instead of a rigid launch list, Pattison has an intuitive publishing style. She steps back periodically to review her extensive catalog and studies her successes, saying, “This is working. What else can I do?” She brings each new book to market in the best way for that book, but her publishing touchstones include:

“I’m trying to build in multiple layers of why someone would need my book in their classroom,” she says. “It doesn’t always work, but I think that’s one of my super strengths … [to take] an idea and then think of layers.”

One of her traditionally published books, Prairie Storms, adds these layers in three parts. “I’m bringing in animals, then the weather, and then I organized it by month,” she explains. “In the early classrooms, when they’re learning the months of the year, they can use it for that, so there are three ways in. If I can get three ways into a book or four or five, then it’s much more likely to sell.” When Pattison is looking at a science idea, she looks at the science standards in the United States to see what is required at different age levels and what she might work into a story for her target age group. “I’m thinking about the idea,” she says. “Can I do it by months? Can I add colors? Can I add numbers? … I’m thinking of all of those things as … I try to write a great story.”

As a publisher, Pattison says, the books you choose to publish and how you approach topics or stories define your brand. For the library and school markets, these are key selling points. “Your reputation just builds over the years,” Pattison says. “Now, when a science teacher gets a book from Mims House, they know that place—or I hope they do.” It can start with something as small as the consistent use of markers like name, logo, fonts, or colors. For Mims House, it might be a “feel to the art”—a natural extension of Pattison’s other creative outlets in quilting and collage work. It might also be readers’ familiarity with the publisher’s other titles. “Mims House has developed a reputation for really great science books for kids, and … hopefully for interesting novels for kids.”

Despite her love of watercolors, collages, and color, Pattison doesn’t do her own illustrations, but she’s clearly an art director with a vision. “I’ve consistently used one illustrator, Peter Willis, from the UK, for eight or nine books now,” she says. “He’s fabulous. … He brings the fun, the playfulness, the colors, the composition, (and) all of that goes together and it creates this brand.”

Still, Pattison’s advanced color and composition skills aren’t going to waste. Her quilting experience may deserve credit in a new project she’s taken on with a traditional publisher, Dayspring, to design pop-ups for picture books based on traditional songs. Possibly most easily recognized as a greeting card manufacturer, Dayspring had no trouble making pop-ups or “paper engineering” that would be financially impossible for an indie publisher.

For Pattison, publishing is like writing fiction: There’s a setup and a payoff. An established brand sets expectations that are fulfilled when your publishing delivers a quality product. “It’s a different way of looking at it than, ‘I’m just an author. I’m going to put my books out there.’” In the years she’s spent writing her own books and publishing through Mims House, she’s learned that bringing all her skills and experience into new opportunities is one of the best ways to quality books. “What would make someone look at a book and say, yes, that’s a Mims House book? It’s hard,” Pattison says. “You have to allow your passions and your interests to come through. But if you can do that, then you can consistently build a collection that says this is a Mims House book.”

Nine years after her first indie publishing success, Pattison’s sixty-five titles have earned her numerous awards, starred reviews, and countless avid young readers. It was time to “translate that [interesting intellectual property] into something else for kids.” In 2022, Pattison took her well-defined brand to a new level of creativity by exploring licensing at Kidscreen Summit 2022, Licensing Expo 2022, and a Women in Toys workshop. This past year, she also branched out into Kickstarter, boosting presales for her holiday picture book The Plan for the Gingerbread House, as well as for her Kittytuber series. With events like these, Pattison is actively listening to her target audiences, experimenting with new ways to add value, advocating for her books, and aiming for excellence.

The 2023 Mims House catalog showcases the consistent application of those same publishing touchstones that Pattison has used to drive her author career. Already, she’s looking forward to her award-winning Moments in Science series coming out in Korean over the next year, and plenty more projects are in store for her young audience in the coming months. Keep an eye out for more publishing payoffs—after all, she still has eight hundred ISBNs left to go.