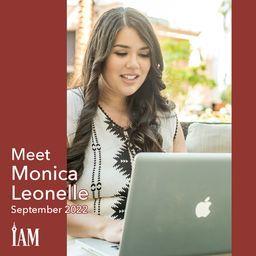 As a USA Today best-selling author and with over fifty books to her credit, Monica Leonelle has earned her reputation as a productive novelist. She shares the title with one of her two nonfiction series for authors. She writes quickly and publishes often.

She’s also one of the most marketing-savvy authors in the business with a deep understanding of how to write persuasive copy and get her books in the hands of readers. This one-two punch makes her an unmitigated success; she can write and market like some can walk and chew gum.

Leonelle started her career as a software engineer, spending years in “Big Tech” before earning her MBA and then taking executive positions in marketing at startup companies. Her author career started in 2009. Initially, Leonelle’s career goals included public speaking, she says, and in her mind, publishing was the thing she needed to do “to get to the other thing.” Her first book was about social media and how companies could utilize it. At the time, Twitter was just a few months old, and Instagram didn’t yet exist.

That first book sparked an epiphany.

The technical aspect of self-publishing wasn’t as easy in 2009 as it is today, but even then, Leonelle could already see the upside to self-publishing. Social media was evolving quickly, enough so that it made little sense to go through the process of traditional publishing with its longer lead times. Had she waited for a traditional deal like some others she knew, the content in her book would probably have been outdated.

But more importantly, she enjoyed it. “I just got really hooked on publishing books,” she says. “That was not the goal.”

Something clicked. “Until then, I had been looking for ‘my thing,’ like my one thing—the career I knew I could invest in forever. And I had tried software, and then I had tried marketing,” she says. “And every single time I switched [careers], I was like, ‘Okay, I can see that I’m getting closer, but it’s not the thing.’ And then finally with books, I was like, ‘This is the thing.’ And I had been searching for it for seven or eight years, and then it was there.”

From 2010 to 2014, she wrote fiction while she freelanced full time. She wrote Steamy Contemporary Romance under a pen name but finally shut it down because she “didn’t have the passion for it, which I think is needed in this industry.”

She says the lessons she learned were invaluable to her future success. “I had learned to write really fast from freelancing and from fiction. And I learned dictation. I wrote an article about [dictation], and then it was like ten thousand words. And I kept getting questions.”

From that article and the questions she was asked, she expanded the article to forty thousand words and published it on Amazon for ninety-nine cents. She says the cover was the “worst in the world,” and she had no expectations for success.

Nonetheless, success happened. Leonelle sold over twenty thousand copies and later turned that book into a series with two new books: The 8-Minute Writing Habit and Dictate Your Book. She eventually decided the books’ popularity came from the questions they answered for her readers. “That’s something I’ve learned about nonfiction,” she says. “It wasn’t based on something that I wanted to talk about. It was based on something that other people wanted to talk about.”

After going full time, Leonelle’s next focus was to look for ways to expand beyond publishing solely on Amazon. She says that while it makes sense other revenue opportunities exist for authors.

She had been online friends with USA Today best-selling author, publisher, and speaker Russell Nohelty for years when she learned he was looking for someone to take over his content, books, and courses.

They signed a publishing agreement in 2020. In March 2021, Leonelle approached him with an idea to use his content to create a new five-book series. He was inspired, and they teamed up and planned a sixteen-book series called Book Sales Supercharged with a staggered release schedule over the next year. Each book sales ns one facet of a specific sales strategy: how authors can maximize sales through print copies, by using Facebook, by creatby  translations and audiobooks, by releasing via Apple Books, and by launching on Kickstarter.

One of the books in that series, Get Your Book Selling on Kickstarter, was based on the campaigns Nohelty had been running for his own books over the last couple of years.

“Russell had done the work, and we had proven the concept ourselves,” she says. All that was left was to share it with other indie authors.

In November 2021, the two of them ran a Kickstarter campaign. As part of the campaign, they planned to release the book in July 2022.

“It was just kinda this funny, very meta thing that we were like, it’ll be a fun promotion. And then [Nohelty] was like, we have to hit ten thousand [dollars] on this, or else it looks stupid.”

about the goal since sheal since she hadn’t yet run a campaign herself. She needn’t have worried. The pair’s campaign ended with over twenty thousand dollars in pledges.

Then, a few months later, author Brandon Sanderson made Kickstarter history in March 2022 with his campaign, rforty-one than forty-one million dollars to publish four new books—half of that in the first seventy-two hours alone. “The whole publishing community was like, ‘Wait, what? What’s Kickstarter?’” Leonelle says. “And Russell was like, ‘You’ve got to publish the e-book,’ because we hadn’t even put the e-book out.”

They took advantage of the zeitgeist of Sanderson’s wave of publicity and created a course with students from many genres. This gave the duo added data they could use to update the book and create a podcast to share case studies from their students.

Leonelle suggests that the spillover from Brandon Sanderson’s popular Kickstarter campaign is helping other indie authors. “I think that’s why Kickstarter is having its moment—because of attention arbitrage.”

Leonelle’s old stomping grounds within the technology and marketing industries offer her a unique perspective on the business side of publishing. She can spot trends before they’re visible to others—and she’s not hesitant to share them.

“I believe that publishing has become a “Big Tech” battleground,” Leonelle says. “And you can see that even though authors are still a bit Amazon focused, Amazon is just one of the big players in the publishing space right now. Google, for example—they’re very interested in audiobooks.”

She continues, pointing out that Google, Apple, and Spotify dominate the mobile distribution channel and can get audiobooks and podcasts in the hands of most device owners globally.

Like most serial entrepreneurs, Leonelle’s continually asking herself, “What’s next?” She and Nohelty have established two author membership programs: the Go Wide, Grow Wide incubator and the Kickstarter Accelerator.

From a creative perspective, she’s ready to write fiction again after taking a break in 2019. “Creatively, I feel like there are seasons for myself,” she says. “I realized that I really just want to make sure that my fiction backlist is in really good shape. I really want to get all of those rewrites done, get books republished, get new books out, and finish up series.”

With Leonelle’s penchant for productivity, give her a weekend to whip it into shape.