Amazon KDP Gets Serialous: A Closer Look at Kindle Vella 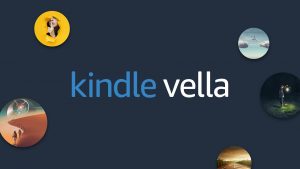 On April 13th, Amazon’s Kindle Direct Publishing (KDP) announced a new program: Kindle Vella, a home for serial stories. Like Kindle Unlimited and Kindle Worlds before it, indie authors around the world have shown enormous interest in the upcoming program, which is due to launch this summer. But like all Amazon programs, we authors are left to wonder: is this another KU or another Kindle Worlds? One of those programs worked extremely well, but the other left a lot of authors reeling when it shut down.

Today we will look at the Kindle Vella program, examine it in detail, and attempt to determine if this is worth our time—or if we’d be better off writing something else.

Serials are long stories told in small slices called episodes. Authors publish them on serial platforms like Radish, Royal Road, and Tapas, uploading new episodes on a regular basis for their readers. It’s a lot like many broadcast TV shows; readers show up for the next installment of the ongoing story.

While episode length varies a bit from one serial site to another, Vella is allowing uploads of episodes from 600 to 5000 words in length. This gives the writer plenty of space to work with for each episode, but episodes are not always the same thing as chapters in a novel (although they can be similar).

Where a novel might have a “slow point” that spans an entire chapter, with a serial there is a longer break between each episode. With this format, it’s even more important to create story hooks that keep the reader entertained and wanting desperately to know what happens next. If you allow the reader to feel like they’ve reached a satisfying conclusion for even a single episode, they may jump to another story.

Kindle Vella is Amazon’s upcoming entry. They announced it will launch on iOS devices and web browsers only, and will only be available to US authors at launch. However, they’ve also said they plan to launch an Android app and expand author access to other countries.

To access Vella, go to the KDP help pages, click the link to Kindle Vella on the left sidebar, and then go from there to the section about uploading episodes. It’ll take you to a special Vella interface.

We can already upload as many episodes as we’d like. It’s a simple matter to create a new Serial (that’s the overall story) and then upload several initial Episodes for that serial. Most writers with serial experience are suggesting authors launch with 5-6 episodes. The first three episodes will be a “free sample” for the reader, so you want something after those first three. But we don’t want to upload dozens of episodes right away, generally speaking. Part of the fun for these readers is to explore content as it is uploaded.

The big one is the exclusivity clause—but bear with me, because it isn’t as bad as that sounds. There’s a great deal of confusion over what Vella exclusivity means.
KDP is requiring the following:

No Vella work can previously have been published as a “long-form work” (like a novel). So we cannot split up existing books for this program.
Likewise, before we publish any episodes of a serial as part of a long-form book (like, compile the episodes into a novel), all episodes of that serial must be taken down from Vella.

Episodes can be uploaded on other sites, too. But they must be in episode format and must not be freely available on the web.

Obviously this makes things a little trickier for folks who usually write novels. We can put our episodes up on other serial sites. We can also release them to fans on our websites or Patreon, provided they’re behind a paywall. But we have to take the serial down from Vella before compiling it into a “regular” book. This of course means delaying the income we’ll make from sales of those books.

Another possible downside involves author royalties. At present, readers will pay for tokens which they use to buy episodes at a rate of one token per hundred words (a 1000 word episode costs ten tokens; a 1099 episode is also ten tokens; a 1101 word episode is eleven tokens). It looks like the author income sits at about three times what KU pays per thousand words, but that number is definitely still in flux, as we won’t know how Amazon plans to discount or give away free tokens until after the program goes live. I expect that number to drop. How much? We don’t know.

Those are some hefty downsides. We have to choose between publishing as a Vella/serial work or a long-form novel, and like KU we’re not sure what the pay scale looks like (although initial indications look good).

However, Vella might well be worth it. As we saw when KU started, early adopters of new KDP programs often have a strong advantage over later arrivals. I’d expect the same here. We don’t know how well readers will take to this new platform, but serials are popular, so it’s likely to work if Amazon pushes hard.

The most important element for me is that we can always take the works down. If Vella flops, I can immediately take any serials I’ve uploaded down from Vella and compile them into novels. The only downside is I have to delay the full-book upload.

For me, the chance to get in on the ground floor of something new outweighs the small delay. I’m planning on launching several serials in Vella when it goes live. Those which do well there will get continued. Those which don’t will get taken down and compiled into novels.

I see two approaches likely to succeed in this program. The first is going “all in” on serials: setting up one or more Vella serials and also putting those episodes live on as many other paid serial sites as possible. The second would be an “iron in the fire” approach, where the author puts a serial in Vella to test it out but remains primarily focused on regular novels. I believe either option has a good shot at working out well regardless how successful Vella ends up being.