The Women of GameLit: Making Their Mark on a Male-Dominated Genre 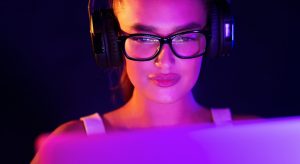 According to a 2021 article in Forbes, women accounted for nearly 41 percent of the gamer population in the United States and up to 45 percent in Asia, which also sees 48 percent of the world’s total video game revenue.

While reader demographics are almost impossible to evaluate—the numbers simply aren’t readily available—a quick review of five well-known US LitRPG publishers shows only about 13 percent of their named authors use she/her pronouns in their bios. A cursory glance at a few popular podcasts about these genres revealed only two interviewees who were women—both narrators, not authors—and a lengthy list of interviewed men. And if you spend any time in the various LitRPG author and reader groups on Facebook, it’s apparent that the demographics skew more toward males.

Why the possible disconnect between women who enjoy video games and women who write in video game worlds? Hard to say, but when it comes to that 13 percent of female authors, the powerful stories they’re writing are helping women stake a claim in subgenres already experiencing huge growth within the indie author industry.

Have you ever seen the movies Jumanji or Ready Player One or read the books they’re based on? What about the more recent original movie Free Guy? Yep, those are all some flavor of GameLit.

Essentially, GameLit and its associated subgenres are stories with game elements woven in. In LitRPG, a genre connected to GameLit, more statistics and rules might come into play, but even under that heading, the stories can follow many paths.

According to all the authors we interviewed, following the reader’s expectations for the subgenre you’ve chosen matters. “I would caution … that if your game does not have stat boxes or if it’s only GameLit adjacent, do not market it as such,” GameLit author Jay Boyce says. “For the love of all that is holy, do not say it’s a LitRPG/GameLit book. People will get angry. Pick the right one and stick to it, and make sure your book actually has those elements. There is nothing worse than the bait and switch.”

In other modern fantasy genres, such as Urban Fantasy, you’ll find no shortage of female main characters. GameLit, however, appears to be an outlier with that trend, author Jess Mountifield says. “It’s tough to get all the readers to take a chance on a female-led book in the genre. It’s still my preferred choice, but it has meant that sometimes I’ve gone with a male lead.”

The authors interviewed all seemed to agree that lead character diversity is a concern. “What it needs more of is acceptance that not all people are like you—‘you’ as in ‘everyone is different.’ Sometimes the genre feels a little tunnel visioned in what sort of people the MC [main character] and surrounding entourage can be. I would love to see more female MCs, but most female authors I know have even steered away from writing them and have chosen to focus on male MCs instead,” says author K.T. Hanna.

A lack of female leads seems to correlate with the lack of female authors. “Honestly, I want more female perspectives,” Boyce says. “The genre is heavily male-dominated right now. I know there are so many female gamers out there, so many female authors. I’ve even found several lately that I didn’t know were writing in the genre because they wrote books and published them in various places without taking advantage and becoming part of the pre-built communities.”

In fact, statements like, “It’s hard, but … something I love doing” and “To be honest, it’s been a little tough,” were common when asked about what it’s like being a female author in the GameLit subgenres.

“Sadly, most guys don’t like [reading about] girls in the genre,” author Dawn Chapman says.

Mountifield offered her own perspective. “There are some subgenres that can make it feel like this is a genre that doesn’t respect women much, and there’s always a male writer in every genre who doesn’t respect women. But there are also some great guys in the genre who want us to be here and want women to both read and write this.”

Light at the End of the Dungeon

Without glazing over the above concerns, the authors interviewed were quick to point out some of the shining moments of the genre as well.

As Chapman puts it, “We really are a very close knit community, and that matters. Authors and fans are all very protective.”

And that point is incredibly evident when you visit GameLit-heavy spaces like Discord servers, Reddit threads, and Facebook groups. These authors know one another; they collaborate. On serialized platforms like Royal Road and places like Patreon, they are often huge fans of their peers. These authors champion the works and successes of their communities.

Authors also have the opportunity to find immense satisfaction writing in such an interesting and evolving genre. “One of my favorite things as an author is actually the surprising amount of parents I get messaging me because they were able to use my books to connect and read with their teenagers. They’re always very excited to find a book that they can share,” Boyce says.

Portal to the Future

Numerous stories of connections have been forged between parties because of a shared love of literature, but a genre that could potentially transcend generational gaps in new ways is noteworthy. The genre is evolving and expanding at a breakneck pace, possibly even more so.

Hanna was optimistic the same genre evolution might occur on the reader’s side. “The genre has grown so much since I started writing in it. I’d love to see people who aren’t necessarily gamers fall in love with it too, but that might be too much to ask. But it would be nice if every single gamer found it and devoured it. After all—writing is what we do. It’s nice if it can pay the bills.”

Boyce also added her take on what the genre might see in the future. “I honestly think this is only the start. The genre as we know it only started gaining traction a little over five years ago. Gaming is such a normal part of people’s lives now, and books allow you to encapsulate large stretches of gaming without having to actually go and grind for months .… The genre is here to stay, and it’s only going to get bigger from here on out.”

With five-figure Facebook reader groups and an extremely participatory and integrated customer base, the genre indeed appears to be here to stay.

Many thanks to Dawn Chapman, Jay Boyce, Jess Mountifield, and KT Hanna for their assistance with this article. For more information about each, please visit their Amazon author pages or website listed below.

Jay Boyce, author of the A Touch of Power series: https://jayboyce.com/