The Secret to Unlocking the Action-Adventure Genre 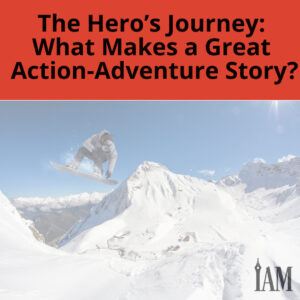 Ever popular, the Action-Adventure story is the original hero’s journey: a protagonist who must go on a quest to a new world and fight demons—both inner and outer—along the way. With such flexible parameters, the genre is one that often must share the spotlight, whether it crosses with Fantasy and Sci-Fi epics, Thrillers, Mysteries, or another category of fiction. Even Romances have been known to cross over into the Action-Adventure realm from time to time. However, with the popularity of movies like National Treasure and books such as Dan Brown’s The Da Vinci Code, Action-Adventure has made a name for itself over the years all on its own.

As a genre, Action-Adventure fiction is primarily defined by a heroic physical quest where, should our protagonist fail to rise to the challenge, dire consequences await. Typically, the fate of a nation, a species, or an entire universe rests upon the hero’s shoulders. In undertaking the quest, our protagonist is not only saving their people but also beginning to understand the true power of their own character.

Readers will correctly assume that the protagonist in an Action-Adventure story will come out a winner, but it’s the journey—both physical and emotional—of getting there that will keep readers gripped and turning pages. Let’s explore some elements that make for good Action-Adventure stories.

Readers who love the Action-Adventure genre will want specific sequences and tropes from such a story. These include:

A likable hero: The protagonist in an Action-Adventure tale is an ordinary person who’s been thrown into an extraordinary situation. This is not someone who expected—or sometimes even wanted—to be a hero, but the situation has demanded they rise to the challenge. The hero must be likable and relatable and often follows a strict moral code, which means they won’t take shortcuts or do underhanded things, even when pushed into a corner. A classic villain: The “bad guy” in an Action-Adventure story can be a villain, a situation, or, oftentimes, both. The antagonist will do everything in their power to prevent the hero from succeeding in their quest, and it’s these challenges that both raise the stakes for the other characters and heighten the tension for readers. The villain will typically revel in the hero’s misery and often has a master plan of their own, which they can only achieve with

the hero’s failure. Although the hero is often an ordinary person, the villain is both powerful and motivated.

A quest: The one thing that sets the Action-Adventure story apart from other genres is the quest. Our hero must leave their current physical location and comfort zone and embark on a journey to a new place and time, where the rules are different and the challenges unknown. It is this unfamiliar environment and the uncertainty of the path that keeps readers coming back to Action-Adventure stories. There are a lot of world-building opportunities in Action-Adventure tales, and smart writers will incorporate elements from the new world to create both conflict and tension.

High stakes: It’s important to remember that Action-Adventure stories, whether they’re novels, short stories, movies, or video games, are often high concept and therefore have high stakes. The consequences of failure are death and destruction on a large scale. On a smaller scale, throughout the narrative, the hero must face personal peril. As the risks get progressively greater, so does the hero’s confidence. A ticking-clock scenario is commonly used in Action-Adventure novels.

Action sequences: This is a plot-driven story that must offer plenty of action sequences. The average Action-Adventure film contains nine action sequences, according to the screenwriting resource Ink & Cinema (https://www.inkandcinema.com), and that’s the pace you want for your story or novel as well. These action sequences, be they car chases or gun battles, should place the reader in the middle of the action and offer a visceral experience, keeping them on the edges of their seats.

Transformation: Some Action-Adventure protagonists will maintain a neutral character arc and change very little over the course of the story. But for those characters who do change, by the end of the story, the hero who started their journey as an ordinary person will no longer be the same. In these cases, the story will show us the journey and the road that led to the transition, and at the end, there must be a final battle in which readers can clearly recognize that transition, making the journey from ordinary person to hero complete.