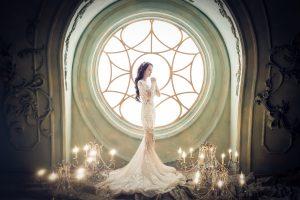 Romantic Fantasy (AKA Romantasy) is a subgenre of Fantasy that pairs a strong romantic subplot with a Fantasy main plot. The focus can skew toward the Fantasy plot with a significant minority of romantic elements, or it can balance fairly evenly between the two.

Romantasy is often confused with its sister genre, Fantasy Romance. While the Venn diagram of their readership does overlap, distinct expectations mean readers of one may not choose to read the other. If you like both, you’re in luck: A quick look at the bestseller lists and Amazon charts shows the likes of Sarah J. Maas, Raven Kennedy, and Laura Thalassa flying high, proving that both genres sell for traditional publishers and indie authors alike.

Both genres tend to be written for women readers and feature romantic relationships, which can be heterosexual, LGBT+, or polyamorous (as foregrounded by reverse harem’s success in recent years). They run the gamut in terms of heat level, from no hint of sexual desire even in characters’ thoughts all the way to explicit sex scenes with four-letter anatomical terms. Whichever you choose, as with any Romance, it’s advisable to signal the heat level to readers through marketing material, including covers and blurbs.

Where Romantic Fantasy is a subgenre of Fantasy, Fantasy Romance is a subgenre of Romance (some readers shelve it as “Fanrom”). As such, books in that subgenre obey the rules of Romance (e.g., ending with an HEA or HFN), broadly follow the Romance structure outlined in Gwen Hayes’ Romancing the Beat, and tend to have a single or dual point of view. Each book in a series generally follows a different couple. They are romances—they just happen to take place in a Fantasy setting. An example is Grace Draven’s Radiance.

Romantic Fantasy books, on the other hand, follow Fantasy rules and expectations (some readers shelve these as “Romfan”). They tend to be longer (books longer than one hundred thousand words are common, and those beyond two hundred thousand words are still within normal parameters though fifty-thousand-word novels also exist within series) and will feature fantastical elements, such as magic, fantasy creatures, and worlds that, while influenced by the history of our own, are not quite the same.

They may or may not follow Romance rules; for example, the heroine might have multiple partners, as seen in A Court of Thorns and Roses when the central character moves from one love interest to another through the course of the series. An HEA/HFN is not guaranteed in Romantic Fantasy books; however, readers may still be disappointed if your epic love story doesn’t end happily.

Books in a series tend to follow the same central characters as they face various trials and tribulations and may feature single, dual, or multiple points of view. Raven Kennedy’s The Plated Prisoner series, beginning with Gild, is a recent example.

When trying to remember which is which, it’s helpful to keep in mind the second word is the noun (Romantic Fantasy or Fantasy Romance) or its core genre while the first word is the adjective that tells you what kind of Fantasy or Romance.

While most Fantasy tropes can find a home in Romantic Fantasy, readers have specifically come to expect some key elements from this genre.

These stories are at their core Fantasy adventures. That could take the form of finding the MacGuffin, saving the world from the evil overlord, or even becoming the evil overlord in a more villainous take on the genre. (Indeed, villain Romance, a romantic trope, translates well into the genre.)

That being said, readers do expect the romance to be significant and take up screen time: The brief mentions of romance in The Lord of the Rings, for example, don’t qualify it as Romantic Fantasy and would disappoint the genre’s readers.

Ultimately, we come to Romantic Fantasy for stories that combine adventure and romance and allow us to escape the mundane world for as long as it takes to turn a few (or several) hundred pages.

A female lens: The readership is largely made up of women: they want to read narratives that foreground women and their stories. Where the heroine loves a hero, he needs to be likable (and loveable) to the women reading.

The meet cute: Romantic Fantasy readers expect this Romance staple—the moment the protagonist meets their love interest. As with Romance, the couple may already know each other (as in the case of friends to lovers), but they will still have a key moment that’s the first time they share space on the page, which will form the foundation for their relationship in the reader’s mind.

Strong heroine who saves the day: Most commonly books by women for women, these include fewer damsels in distress and plenty of dames doing the saving. Often, the love interests rescue each other at different points throughout a series.

Enemies to lovers: This bestselling Romance trope is just as popular in Romantic Fantasy with plenty of scope for inter-species prejudices and love across (literal) battle lines.

Friendship and found family: With the marriage of Romance and Fantasy, relationships are a key focus of this genre, and that goes for the platonic kind too. Even the hero who begins as the cool, aloof loner must eventually become part of a collective even if that’s only through their partner.

Elemental magic: Who wouldn’t want to be able to hurl fireballs or lightning bolts? Readers love characters who can do that too.

Fairytale retellings: A significant portion of Romantic Fantasy stories are retellings of fairy tales. This can range from a novel that closely follows the traditional Beauty and the Beast story to a looser reimagining with a hero who is cursed and a heroine whose love can save him as seen in the first book of Sarah J. Maas’s A Court of Thorns and Roses.