It’s a Cinch: The Fact and Fiction of Corsets 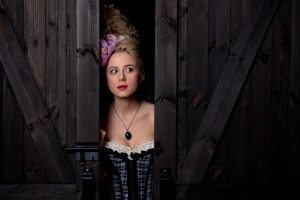 Valerie Steel begins her study The Corset: A Cultural History claiming, “The corset is probably the most controversial garment in the entire history of fashion.” Considering its reputation as oppressive, torturous, and downright dangerous, it’s hard to argue.

High time, then, we unknotted fact from fiction when it comes to this complex garment.

As with any facet of fiction and historical research, it’s for you to decide your level of detail and accuracy and consider your audience. Does it matter if you use the word “corset” in your seventeenth-century-inspired Fantasy story (strictly speaking, the era-appropriate term would be “stays”)? What about your painstakingly researched Historical Fiction set in the court of Louis XIV?

What Is a Corset?

Broadly speaking, a corset is a stiffened, tightly fitted garment that supports the torso. Shapes fluctuated with fashionable silhouettes, but they were worn almost ubiquitously by women of all kinds in European-influenced cultures from the sixteenth until the twentieth centuries.

It’s important to understand the stays worn by your Elizabethan heroine were very different from the corset her many-times-great-granddaughter wore three hundred years later. This is an area where research is your friend, but beware of sensationalized reports (and check the myth-busting section below). The historical costuming community is a great resource.

Many, many myths surround corsets, so we’ll tackle a few of the most common beliefs and see if any stand up to closer scrutiny.

First, no, women in the Victorian era almost certainly didn’t have ribs removed to achieve a smaller waist. No documented evidence supports this, and considering the huge risks of infection at the time, any elective surgery was a bad idea, never mind one as major as rib removal.

Yes, corsets are capable of moving the organs. So too is yoga, pregnancy, or simply eating a large meal. Some evidence shows that regular corset-wearing, especially from a young age, might affect the shape of the ribcage; however, many modern women develop dents in their rib cages and/or shoulders from wearing bras.

“Can you breathe in that?” Yes, women of the nineteenth century were just as fond of oxygen as those in the twenty-first century. A properly fitting corset only reduces the waist, so it shifts the wearer’s breathing higher in their chest, giving that “heaving bosom” effect.

“All Victorian women tightlaced!” This is a myth. Tightlacing (where the waist is reduced by several inches) is the most common corset trope; however, it wasn’t the norm. The small waists seen in photographs from the era were often achieved using early photo manipulation or the contrast of large skirts, sleeves, or bust/hip padding against a lightly cinched waist.

“You can’t put a corset on without at least one maid!” This is another myth. In the cultures/eras discussed, almost all women wore corsets/stays, even the very poor. The split busk—the steel closure still seen at the front of modern corsets—was introduced in the mid-nineteenth century and made it easier to put on a corset unaided. Searching “how to put on a corset by yourself” yields various videos that show the process.

“Women couldn’t do anything wearing corsets!” This is yet another myth. “All women” above includes maids and other workers. Certain styles were even developed to allow women to more easily ride horses or bicycles and take part in sports, such as tennis and mountain climbing. Videos show modern corset-wearers weightlifting and sword fighting; they are not straight jackets.

“Women hated corsets,” and “my heroine refuses to wear one!” Like any historical issue, attitudes toward corsets were not homogenous. Steele’s book is an excellent study of the subject. Remember, in that era, a woman was considered undressed and even indecent without a corset. Any heroine who showed up at an 1880s ball uncorseted would be the talk of the town for all the wrong reasons. Finally, as a remedy to their “dangerous” reputation, we’ll end on the reports of women saved by their corsets, such as the case of Mary Sarah Phillips (see Margaret Drinkall’s 19th Century Barnsley Murders) whose steel-boned corset broke her attacker’s blade when he stabbed her. Admittedly, corsets weren’t designed for this purpose, and it’s a matter of luck that the knife hit a steel bone, but isn’t fiction so often about the fortunate misses and the gunshots that hit the lucky cigar case?