How Spicy Romance Authors Turn up the Heat for Readers 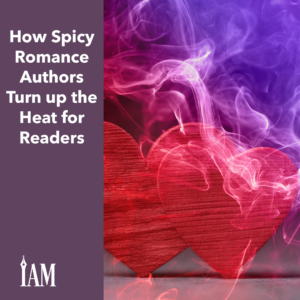 Afternoon delight, knocking boots, dancing in the sheets, the horizontal tango—no matter what you want to call it, we all know the lingo. And for some of us, that lingo, and all the colorful acts it represents, can play a big role in the books we write.

Spicy or Steamy Romance covers a range of tastes, from a handful of mild bedroom scenes to “Kindle-melting” levels of heat with all the accompanying implements and inclinations the author can imagine.

But what’s needed to consider something a Spicy Romance?

The biggest difference between Romance and Spicy Romance is straightforward: No matter what is going on in the book between the hero and heroine—or any other pairing or number of people in the relationship—the bedroom door stays open. What happens between the participants is described, and the reader gets to see all the details.

If it doesn’t have that, it’s not a Spicy Romance.

But even there, there are degrees.

Different levels of spice or steam

Many Romance review sites have their own ratings for books, usually going from no-sex Romance, with only kissing, right up to the spiciest rating, which includes everything you could imagine—and quite possibly some things you couldn’t.

There’s also often a difference in the language for the different levels. Mildly Spicy Romance will have sex scenes, but what happens is mostly either suggested, described with euphemisms, or otherwise skimmed over. The hotter Romances describe what happens in great detail, with four-letter or other suitable words. The “hottest of the hot,” as Shameless puts it, will often contain more graphic descriptions and adult language, along with additions, such as sex toys and other accompaniments.

It’s important to keep in mind that book ratings will be different according to each reader’s expectations and preferences. Authors shouldn’t be surprised if a Spicy Romance novel receives different ratings across reviews, nor should they market their story according to a certain spice level—some readers might find it misleading if the author’s rating isn’t in line with their own expectations.

What about genres, tropes, and pairings?

Spicy Romance has virtually no limit. As long as a story includes romance as a major plot within the story, it can be spicy. A quick look on Amazon brings up spicy options for Sci-Fi Romance with cyborgs and aliens; Contemporary Romance with cowboys, billionaires, mafia, geeks, and the guy or gal next door; Paranormal and Fantasy Romance with monsters, shifters, mythical beings, gods and goddesses, and things that go bump—and grind—in the night; Historical Romance; and even Horror Romance and dinosaurs. Though unless you’ve invested in a really good eye bleach, can we suggest you not look up that last one on Google?

Pairings really can include whatever floats your boat, including male-male, male-female, female-female, or any combination of any gender. The genre also leaves room for relationships that go beyond monogamy to include multiple partners, ménage, and/or reverse harem, with or without the crossing of “swords and honeypots.”

As for tropes, any traditional Romance tropes can work just as well for Spicy Romance. You can find Spicy Romance that are labeled “enemies to lovers,” “second-chance romance,” “opposites attract,” “forced proximity,” “fake relationship,” “alpha male,” and more.

What else to be aware of when writing spicy romance

With romance involved, readers will expect a Happily Ever After (HEA) or Happy For Now (HFN) ending, no matter what else goes on between the pages of the book or how spicy it is.

Apart from that, consent is the biggest thing to watch out for when writing Spicy Romance. Although not everything in every book will be to your or your readers’ tastes, there should still be a point in any story where participants consent to what is happening, with some exceptions for dub-con or non-con interactions. However, it doesn’t have to be complicated. Something as simple as “Are you okay? Are you sure you want me to *insert hot and sexy description*?” will be fine.

Finally, depending on the themes and plot points in your book, think about whether you need to include a trigger warning. In books with certain dominant characters, for example, there may be more extreme acts, such as play with knives or fire. For some people, such encounters will be right up their alley, but those same descriptions might make other readers uncomfortable. If you know you’re including scenes that might be triggering, a short content warning on your back cover copy and inside can be all that’s needed to alert people ahead of time.