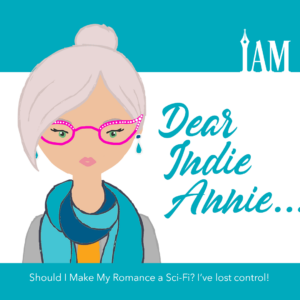 I started to write a fairy-tale retelling, but it has morphed into something more Sci-Fi. Do I let the story run away with me? Or do I force it to stick to my plan?

Lost the Plot in Lajas

How are you, my lovely? Well, I hope, because it sounds like you have been having a lot of fun at your book’s expense.

But let’s park that idea for a moment. Have you heard of Eurovision? The Eurovision Song Contest is a much-loved worldwide musical phenomenon. I am sure our readers in Europe and even Australia are throwing their sequined sleeves in the air right now, screaming, “Indie Annie, we know where you’re going with this!” Because when they read your question, they too will have had a particular song running through their heads, and I guess they will also struggle to shake it off. It’s infectious. It’s Alexander Rybak’s masterpiece “Fairytale.”

Rybak became a household name across Europe after winning the Grand Final of the 2009 Eurovision Song Contest for Norway with 387 points out of a possible 492, the highest-recorded score in the contest’s history. “Fairytale” went on to top the charts in many European countries, and the follow-up album, Fairytales, was released in twenty-five countries. This was quite an achievement, especially for an entry from Norway, which holds the record for the country with the most zero-point entries in history. (For fact-checkers: They scored nil points four times: in 1963, 1978, 1981, and 1997.)

“Indie Annie,” I hear you cry, “why, oh why, are you talking about a song called ‘Fairytale’ when I am telling you I am struggling to keep on track with my retelling as it is? I don’t need to go any further off-piste!” And, my dear Lost, I hear you; I truly do. All I ask is that you defer from heading off to Spotify or YouTube to listen to this wonderful little song for a few minutes whilst I explain my thinking to you.

When “Fairytale” won, it was an instant smash. I can recall I was in London with friends at the time. They throw an annual Eurovision party and watch the television show live. They eat food from the countries taking part. They have individual scorecards and vote for their own favorites. It’s great fun. I have taken part in this yearly celebration of music a couple of times, and this was the first year everyone agreed on the winner.

Rybak was fresh faced, doe eyed, and could play the violin better than the devil who went down to Georgia. In a sea of Europop blandness, he went back to basics and crafted a simple song that pulled the audience into his love story with the toe-tapping accompaniment of his country’s traditional folk music. Others copied him in the years that followed, but no one has recaptured that magic.

What has this to do with your question? My dear, the answer is in your chosen genre. Why do people read fairy-tale retellings? Because the stories are timeless. They work because at their core we recognize the stories of our forebears: the legends, the myths, the tales before bedtime. A retelling places these much-loved stories in a different world, usually by making them more contemporary. Rybak did the same. He knew that the sound of the violin would tug at our universal heartstrings. His words described falling in love with the perfect person as not a blessing but a curse—one that, if we are lucky, will drive us all insane. And being madly in love is what we all desire. It calls to our deepest fears and secret longings.

Fairy tales do the same. So if your story has been transported to a galaxy far, far, away, perhaps there is an audience waiting there to read it. Your choice is to decide whether you want to boldly go where no writer has gone before or revisit what you have written so far and bring it back down to earth. I cannot answer that conundrum for you, but Norway and Rybak took a risk, and it paid off handsomely. Be bold. Be brave. Be you.