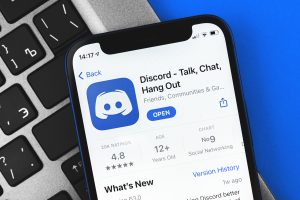 Discord is a multi-purpose chat app made popular by gamers that includes text, audio, and video. Available on all platforms and devices, it has quickly expanded to be one of the premiere locations for interacting with authors and readers. But for those accustomed to other social media platforms, Discord has its own ecosphere and a unique set of expectations. Don’t worry, we’ve got you covered, and global conquest is just around the corner.

It sounds basic, but as a future overlord, an author should fill it out. With 190 characters and six lines of visible text, this is where a user makes their mark. Unlike other ecosystems, Discord users are accustomed to clicking links that take them to websites. However, they are not fans of a hard sell, so avoid “Buy my book” links. Also include a photograph that reflects your tone and brand.

Pro-Tip: Use Markdown Tags to include italics or bold. These can also include clickable links by including https:// in your profile. This is a great way to direct future henchmen to your own server.

Thanks to its gaming origins, Discord is full of creative users. This includes cover artists, web designers, editors, podcasters, and of course, other authors. Jump into conversation with reckless abandon. An author might find their next cover designer or collaboration. Never fear asking questions on Discord. Somebody will gladly offer advice. Add them as “friends” and make a note of how you first met.

Users gravitate toward active servers. Unfortunately, few authors have enough rabid fans to reach this threshold. Servers like “Superhero-Fiction” rely on a cabal of authors within the genre, working together to create a theme-focused experience. This means no one author spends their entire day engaging users. It also creates a strong networking environment that results in the exchange of tips, promotional opportunities, and even a few drunk virtual pub nights.

Create text and audio channels. As an owner, an author can write a short sentence or two about what belongs in each channel. Be specific. Be blunt. Unlike a general forum, channels in Discord each serve a distinct purpose. At the start, expect to crowd control and push conversations where they best fit. The more specific the description, the more users will police themselves. As the community grows, they’ll request new channels to help keep each on track. These are villains to promote down the road.

There are few ways to kill a server faster than using it as a dumping ground for advertising. Discord is the ultimate water cooler, and with the uptick in remote workers, it fills a need to connect with other humans in a work environment. What do you talk about with friends? Gossip? Your cat being a jerk? Anger over Firefly’s cancellation? Guess what, those topics will net reactions, conversations, and authentic interactions that advertising will never achieve.

This goes even further than platforms like Facebook and Twitter, where authors are pushed to provide content marketing (information that might connect to your book.) In Discord, if an author talks about the newest movie and adds, “Like this? Check out my book,” they’re on a fast track to being muted and ignored. Treat them as co-workers, compatriots, or friends, and build a relationship of mutual interest. But since an author will inevitably want to promote their work, consider a specific channel for new releases, or book genres that will appeal to all users.

World conquest is hard work, but this is where Discord finds its footing as an outstanding platform. While Discord remains a mostly text or voice-based platform, the gaming community that fostered its growth has made it a multimedia experience. The “Superhero-Fiction Authors’” server hosts monthly virtual pubs revolving around shop talk. Users can participate with video on or just voice, and the topics change depending on the attendees. They are also hosting communal superhero movie nights. As a genre-based server, their authors also have channels dedicated to writing sprints, curating music, and to procrastination (superhero-deathmatches, movie watch lists, and gamifying user interactions in a level-up system).

In Dakota Krout’s server, “Eternium,” there is a dedicated space for people to discuss each of his series. None of these include repeated links or release notices. They serve as a place for fans to talk about his books. But along with this, he also offers a series of channels that include “pets,” “food,” and a lively channel called the “pungeon,” which offers the internet’s wittiest puns. In Dawn Chapman’s server, “Author Dawn Chapman,” she has similar channels, such as the community jukebox, a sprint channel, and channels dedicated to sharing photographs.

If an author has a communal theme/genre server or their own, there is significant work involved. Connecting bots, ensuring rooms are clearly labeled and logically laid out, is the straightforward part of creating a Discord server. As people join, they need to be engaged and brought into the fold before they click elsewhere and ditch the community. This is where moderators for a server can be useful. Not only will they help police content and keep the peace, but they are also there to engage the server. These individuals should be frequent posters who keep conversations rolling and be willing to drop the hammer should the need arise.

Pro-Tip: Because of the granularity of Discord’s roles, an owner can create specific tasks for each. While there might be a group of mighty ban-hammer swingers, there can also be a role for welcoming ambassadors. Thanks to the nature of Discord, as the server grows, the owner can diversify tasks to help distribute the work. Users see their favorite servers as a place to hang out, giving them responsibility will encourage participation. Thankfully, there are several safety mechanisms to prevent an uprising and spoil an author’s plans for world domination.

If the conversation becomes one-sided, it gets dull and breeds apathy. Unlike Facebook or Twitter, where a creator can drop a comment and walk away, Discord is an active conversation. It requires give-and-take, like an in-person interaction. Ask users about themselves. What’s the weather like? Who are they reading? What’s their preferred way to crush your foes? But be prepared to continue the engagement. Discord pairs well with sprinting. Twenty minutes of grinding on a novel, and ten minutes chatting with the others in the server. Those ten-minute exchanges go a long way toward building a community.

There are bots such as MEEP that gamify user interactions. Creating roles that show user participation invoke the competitive spirit. As users socialize, they receive “experience” that allows them to advance levels. The “Superhero-Fiction” server has users starting as “henchmen” and earning their way toward “Legendary Superhero.” Along with roles, active users can be granted permission to secret channels that could include advance reader copies, scene snippets or first crack at cover reveals.

Many users who come to Discord have abandoned what they see as problematic platforms. Advertising a server on these platforms might net a few users, but it will never garner enough henchmen to execute plans of world domination. An author will want to turn to less frequented locations like Reddit and other Discord servers. Include direct links to the server in newsletters and discover a new audience to help solidify your role as ruler of the universe.