The Transformative Power of Transmedia Storytelling 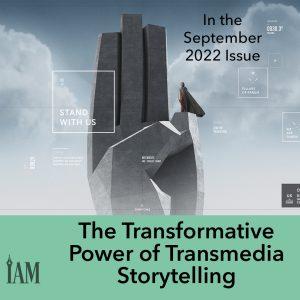 In 2019, actor Henry Cavill brought monster slayer Geralt of Rivia to life in the series adaptation of The Witcher on Netflix. Thus, a new segment of fans was introduced to the elements of Andrzej Sapkowski’s world from the novels: the Continent, its fantastical monsters, and its beloved characters.

Originally begun as short stories in his native Poland, Sapkowski expanded and released his five-book Witcher Saga in Polish over a five-year period from 1995 to 1999, with English translations released from 2008 to 2017. The Witcher fandom in his native Poland and eastern Europe is often described as cult-like in their appreciation of his work.

Novels were just the beginning. Comic books, video games, role-playing games, and animated shorts were developed, expanding the global fanbase. Other authors followed with spinoffs in cooperation with Sapowski as a means to keep his fans engaged. These short stories featured familiar characters as well as new ones. Meanwhile, the original stories were translated into multiple languages and adapted into a movie in 2001 and a television series in 2002.

Sapowski’s work and career is just one recent example of the power of transmedia, a method of using a variety of platforms and mediums to expand upon an original story. For indie authors, the practice offers a creative, versatile way to broaden your readership and grow your business—if you know how to use it.

An adaptation takes an existing work and translates it into a different format, such as a movie, graphic novel, translation, or audiobook. The substance of the work remains essentially the same.

Transmedia, on the other hand, makes use of other media. Fantasy and Science Fiction author Jim Wilbourne says, “Transmedia is taking a core story or core world that your story is built in and then expanding it into different types of media so that different readers or different viewers can experience your world but a different story or experience within that world.”

For example, in The Witcher, adaptations are different versions of the original work—translations from Polish to English, audiobooks, movies, and both television series. Transmedia, on the other hand, are new works—graphic novels, animated shorts, video games, board games, and LitRPG.

Although these are major mainstream media examples, indie authors can use transmedia to their advantage as well. Urban Fantasy author E.G. Bateman created https://cornerdown.com, which serves to sell branded merchandise and showcase the whimsical Fae menu from her Faders series of books, with a review of the diner from a patron.

Cozy writer Penelope Cress created a church bulletin for her main character’s workplace filled with Easter eggs for the next story and included it in her newsletter and on her website. Authors could create a website depicting other elements from their world—for example, the town where a series is set.

Within transmedia, two schools of thought exist as to how the content should be used, commonly referred to as “East Coast” and “West Coast.”

Wilbourne prefers to refer to them as going wide versus going deep. Wide, or West Coast, transmedia takes core work and creates new works based in the world. These could include adaptations but also new stories in different forms—animations, web stories, short videos, audiobooks, podcasts, and other mediums. They are both new stories and new methods of delivering those stories.

Think of a hub and spoke. The hub is the original work with its own set of fans. The spokes are new works in other forms of media, each with its own fans. They may or may not be aware of the other types of work. Some will enter the fandom and learn of the other mediums and become superfans. Others, like video game players, might stay within a single medium.

The deep, or East Coast approach, “[drills] down deeper and deeper for people who love that property already,” Willbourne explains. One example he shares is from The Office, whose creators filmed a YouTube video with the actors having a simulated everyday conversation in the accounting department.

Other examples could include artwork or podcast interviews with characters. Cozy authors often include recipes, complete cookbooks, or companion social media groups for recipe swaps.

“West Coast and going wide is about attracting different types of people to the property,” Wilbourne says. “East Coast is more about deepening relationships.”

Starting on the Right Foot

Indie authors have the benefit of owning their own intellectual property and licensing it as they see fit. If an indie author shares their world and invites other authors to write in it, control still rests with the original author. They retain control as it’s an extension of their work rather than an adaptation.

Wilbourne says to approach adaptations and transmedia with the mindset that you’re a licensing company. “When you create an audiobook, or if you happen to sell your rights to your book, the company creates an audiobook. You have licensed that property to them. You have not given them the copyright of that. From the very beginning, you’re licensing, especially if you do anything outside of just purely writing a book and distributing it yourself.”

As with all things, an indie author has to also calculate the return on investment if they want to produce additional creative works. Everything takes time and money to build and maintain, and authors will often need to hire other creatives for ambitious projects.

As you evaluate whether to create transmedia, consider surveying readers if you have an active fandom to see what they’d like. Remember, if you’re going wide with transmedia, you’re looking to attract new fans that may not know about your books at all and might only be attracted to the app, game, or graphic novel you’re creating.

Authors can often get caught up in the excitement of producing more without calculating the return on investment. Wilbourne suggests recouping your investment by including those assets in a Kickstarter or Patreon campaign. You can include different projects at different levels so that you will only need to pay to have them created if the campaign is funded.

When it comes to creating transmedia for your existing works, you’re only limited by your imagination and budget. Here are a few ways you can get started with transmedia.

Keep in mind that your goal is to delight and engage fans. Whether you go big or start small, your success will depend on ensuring you keep that in mind. “The relationship you build with your readers is invaluable,” Wilbourne says. “And building that relationship with your reader is something more valuable than your next sale because they will go out and buy everything from you if you can create that really close bond.”