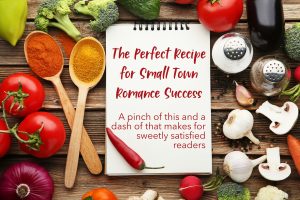 Small Town Romance is one of those tried-and-true genres that withstands the test of time.  While they seem easy, there are a lot of components that people take for granted.

By the end of this recipe, you’ll be able to tailor the ingredients to write your own story.

Step One: Season your setting.

Pick a town that is removed from the hustle and bustle of big city life. It should have a favorite coffee shop, restaurant, familiar hangout.

Throw in a hefty dose of weather.

If you want forced proximity, make it severe weather.

If you want an idyllic environment, make every day perfect.

Step Two: Add color to your story with interesting characters.

This ingredient comes with a warning. The characters in small-town romance are not caricatures or cartoons.

Characters you can use for your story are:

Step Three: Mix your character and settings in a plot.

The plot must have a clear beginning, middle, and end. Here are some must-have plot elements:

Small town romance is known for featuring many of the following tropes. If you include one or more in your story, readers will respond to their favorites.

Take the time to enjoy the story while writing it. Laugh with the characters through their high moments and cry with them through the lows. Top it off with a cover that conveys that the story takes place in a setting that people dream about. Indulge with a mug of your favorite hot beverage.