Meet the Volunteers Behind 20Books Vegas 2022 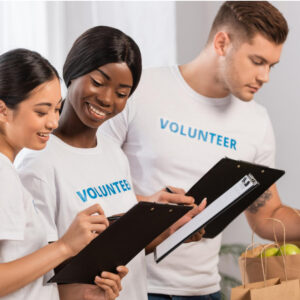 At the 20Books Vegas 2022 conference, the 6 a.m. volunteer shift buzzes with energy. People from all corners of the world run off in groups to unload swag from vehicles, unpack notebooks, and prepare their stations. I was lucky enough to be among them for my second year, and to capture a rare group photo after 20BooksTo50K® leader and conference organizer Craig Martelle’s morning pep talk for the first front desk crew of around thirty people. Another group will replace this first crew after the check-in rush has subsided, with several of them moving to the hall to guide check-in traffic. The organizers spent a lot of time considering traffic flow and human needs in determining how to create a smooth flow. Considering the military background of the Martelle family, it is unsurprising that it takes on a regimented air. It is part military operation and part family reunion, everyone alternatively reaching for boxes of swag and hugs after a year apart. New volunteers swirl among the love, soaking up the energy and making new friends.

This early Monday morning crew deals with jet lag, a lack of breakfast, and not enough coffee. As the conference moves forward, volunteer energy moves a little slower, either from imbibing a bit much the night before or from exhaustion brought on by learning immersion; coffee becomes more important. Kelly O’Donnell, an LMBPN volunteer, can be found at the front desk assisting Tammy Martelle, Craig Martelle’s sister, most of the week with check-ins. Her advice to volunteers: “Get your coffee early. Get your second cup of coffee early.” She’s quickly proven right. Among the check-in buzz on Monday were whispers of the coffee table being set up and offers to get each other a cup.

Most of us know that the front desk check-in is all-volunteer, but we cannot forget that the AV (Audio Visual) club, hall and room monitors, and even the presenters are donating their time to share their knowledge and be of service to other authors. Each type of volunteer has found their niche—the former flight attendant (me) leans toward check-in while the technologically savvy lean toward the AV club.

There is a great deal of work behind the scenes to create and manage volunteers as well, from deciding where an individual fits to planning for restroom breaks and no-shows. Tammy Martelle donates her time to guide the larger crowd of volunteers, never breaking her smile. Volunteer leadership isn’t easy, but she makes it look as if it is.

What is it that drives these humans to donate their time? To find out, I took time between my own volunteer duties at 20Books Vegas to interview some of them.

Brothers Big Sisters, in a program for adult men to read to kids in schools, and to help keep boys reading,” says Alex Bates, a presenter. Bates also spent time at the 2022 conference offering an introduction to Dungeons & Dragons for newcomers to the game. Volunteering, he says, is a “boon for the spirits. So much of what we do as independent creators is so solitary. It’s nice to be around your people.”

Volunteering can also be a powerful way to connect with your tribe, says Kat Adele, who designed a writer-focused fabric and sewed an apron to wear for her first time attending 20Books. Adele says she volunteered as a way to meet other writers. She already has volunteered for several years at a local writers’ conference, finding that it helps her to “be more aware and present during the conference.”

Volunteering gives people a sense of pride, and even ownership of the mission of an organization. This mission helps volunteer recruitment and longevity. 20BooksTo50K®, with its strict and hearty vision that “a rising tide lifts all boats,” draws volunteers who desire to take part in that mission. The volunteer signup for the 20books Vegas events exceeds the need, highlighting the strength of the mission and the charisma of the leaders. These volunteers do not seek perks, for there are none. However, this year, volunteers were given 20BooksTo50K® bags, a delightful surprise to all. These bags became conversation starters, even among volunteers of different groups. I found myself approached based upon this bag and made connections with volunteers I wouldn’t have otherwise met.

“I swing wildly between the introvert/extrovert pendulum,” Adele says. “Volunteering initially provides a shield”—a shield that is often helpful for introvert authors visiting an extrovert city like Las Vegas, with nineteen hundred of their peers in one place. For the introvert writer, even being in a crowded space with writing peers can be overwhelming. Like Adele, during my first year at 20Books, volunteering allowed me to make a few connections before a sea of faces descended upon the conference center. Those connections provided the shield against the unknown. Although I already felt that every attendee was going to be one of “my people,” by volunteering, I automatically had people to wave to later, even if our genres were unconnected. The sense of belonging was enhanced by volunteering.

For repeat volunteers, friendships formed previously reinforced the drive to volunteer again. Cristen Jester, in her second year volunteering with 20Books, says that volunteering brings “a sense of ease in seeing familiar faces.” Repeat volunteers added to the “well-oiled machine” of the check-in process. The volunteers’ bonds grew beyond a polite camaraderie to a family on a mission to help others.

There is a recurring theme among the volunteers: a history of military background either personally or in their family. Military families withstand a great deal of adversity. From tasks that test their souls, to long deployments to eating MREs, military families are resilient, stoic, and most of all, loyal. The Martelles, with their deep Marine connection, carry these qualities over to the 20BooksTo50K® family. The majority of people I spoke with had military connections. These connections come through personal service, as active duty, retired, or veterans; often, this connection is through marriage or being born in military hospitals. Overall, this group of volunteers shared the sense of duty they feel to one another and a shared sense of loyalty to their peers. Dale Grantham, one of the spouse volunteers, gives his time during the conference to support his wife. “It gives her a positive outlook,” he says. “We were both raised in the military, where everyone was family.” A form of ultimate volunteering, those with this military background see volunteering as a responsibility. “I’m not satisfied unless I am participating in some way in some type of

service—it feeds my soul,” says Terry Wells-Brown, adding that it brings her “a sense of worth” to help others.

Creating a safe and welcoming environment is vital for the success of a conference as large as 20Books Vegas. From keeping conference-crashers out of the conference area to making sure that each attendee feels safe, the hall and room monitors are guided by J. Clifton Slater, a duty he describes as vital. “I coach the room monitors to be a safe harbor. Put introvert writers in a crowded hallway, they panic. They need to know there is always someone to go to.” Slater, self-proclaimed “swag hag,” lives near Las Vegas and also donates space in his home to the accumulation of the swag for the event, assuring the success of other volunteer groups, like check-in.

Volunteering can have material benefits, from getting badges early to receiving a 20Books tote bag or lunch in a suite for the volunteers. Yet not a single interviewee mentioned these tangible benefits. Deann Powell, who has been volunteering since she was a child, says she volunteers for 20Books as “a chance to give back to the community because it is a lot for Craig and Tammy to put on here.”

Volunteering has its costs as well. Audio-Visual volunteers often miss out on networking and sessions they want to attend, room monitors miss out on cookies while they give directions, and presenters miss out on other sessions they would like to attend. Regardless, never a complaint passed anyone’s lips. The drive to make a difference was stronger. “This group is all about giving back. Volunteering is a step in the right direction,” says second-time volunteer E. W. Barnes. “My ultimate goal is to help authors come to the event and to meet everyone’s needs.”

Over the course of the week, the buzz of volunteering turns to networking: business cards collected and social media exchanged. With glasses raised in cheer at after-hours gatherings, lifelong friendships are made, anthologies plotted, and co-authors corralled. As the conference winds down, volunteers run into each other one last time, exchanging hugs with the promise to see each other at next year’s 6 a.m. Monday shift. The conference hall quiets to a hum as bags are packed. A trickle of indie authors and entrepreneurs make their way to their cars or taxis, returning home to recover and reflect.

The volunteers perhaps carry something greater home with them: an extraordinary connection to the message of 20BooksTo50K®, that “a rising tide lifts all boats.” Jenn Mitchell, a check-in volunteer, sums up the overall feeling that remains: “This is the one thing in life I get more out of than I put into.”