How Nick Thacker Is Rewriting the Publishing Rulebook 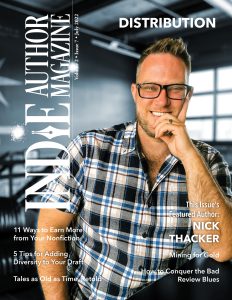 The Thriller Writer Says Traditional Publishing Is Broken. He’s Got Plans to Fix It.

When someone called Nick Thacker’s novels “airplane books” early on in his career, he took the term and ran with it.

The description was meant to be an insult—as in his books were the kind you buy at an airport to help kill time during your flight. But to the Action-Adventure Thriller author, the comment was high praise. If you can pick up one of his novels and be entertained for a few hours, Thacker says he’s done his job.

“I’m not trying to win a literary prize,” he says. “I don’t want to win the Pulitzer. My prose isn’t artistic. I’m treating this like what it is, which is entertainment. And I want to do that well.”

Many would likely say he’s succeeded in that respect. After ten years in the industry, Thacker has published around thirty books, and by 2017, he was making enough money to turn his author business into a full-time career. Along the way, he’s also undertaken projects that boost independent authors around him, including a radio station for writers (https://radiowrite.com) and an email marketing service (https://authoremail.com). Six months ago, he embarked on his newest venture: launching Conundrum Publishing, a traditional publishing company that seeks to right the wrongs of other traditional publishers.

“What he’s doing with Conundrum Publishing is revolutionary,” writes Kevin Tumlinson, an author, podcaster, and the director of marketing and public relations at Draft2Digital—as well as a close friend of Thacker’s. “He’s taking the best strengths of both indie publishing and traditional publishing, throwing out the bits that don’t work, and building a platform that can nurture authors and books in a specific genre. … And it’s a replicable system he can apply to more genres, going forward. He’s building an empire there.”

You’d think Thacker would’ve always enjoyed writing with the way his life looks now. But when he was still in school, the future author hated it. He swore he’d never write long-form again if he could help it.

Then, in 2011, his grandfather died. In the wake of his passing, Thacker decided to write a book to gift to his father, just like the Thriller paperbacks the three would often swap. After all, he asked himself, how hard could it be?

“I knew nothing at all about anything,” he says. Convinced he would only write one book, he tried to fit every trope and idea he could think of into a single story. It didn’t work. Some time and a few books on craft later, he had a finished manuscript—plus a list of ideas he’d had to cut out that would work themselves into his later novels—and began querying agents for a traditional publishing deal. He didn’t even know Kindle existed at the time, but when he discovered Kindle Direct Publishing (KDP), he decided to give it a try.

He didn’t find instant success with the first book, but the process sparked something in Thacker; he kept writing. “I guess I enjoyed it more than I thought I did,” he says. Even while juggling a job at his church and raising two kids, he would find time “in the cracks” to jot down new books a few sentences at a time.

By early 2017, he’d started to make money for a few bills each month, and his wife suggested he focus his energy on either his author career or day job instead of stealing time from both. After a few months, he made his decision official—he quit his job to pursue writing full time. Anxiety set in a day later. “All the sudden, I was faced with, ‘Wow, if I don’t show up and do the job every day, then we don’t get to eat next month,’” he says.

The pressure of that transition to full-time was challenging, Thacker says. He’d come to the publishing world with a minor in entrepreneurship and marketing, but textbooks hadn’t quite conveyed the realities of the business model. The stress weighed on him; for a time, Thacker struggled with panic attacks and severe anxiety. “I definitely still struggle with it,” Thacker says. “If I’m left to my own devices and let my guard down, I will start to feel anxious.” But he’s also learned to manage it over the years and embrace his diagnosis—something he encourages others to do as well.

“Let’s make this part of the discussion of what it means to be a full-time author because there’s some version of this that we’re all struggling and dealing with,” he says.

As Thacker has spent more time in the industry, his interests have broadened beyond just writing books. He’s become involved in the indie author community, speaking at conferences and sharing advice and tools with newer writers. He uses his marketing background to manage Author.Email, a publishing-focused email marketing service. He offered an author coaching service for a time—it was how he met Tumlinson in 2013. Now the two joke that Tumlinson bought him as a friend during that session. “He owes me two hundred bucks,” Tumlinson says.

Along the way, he also received advice from other authors he met, with one message in particular cropping up regularly: that an author could generally find more success through self-publishing than traditional publishing. Thacker agreed, but he wanted to prove himself right. So he sought a traditional publishing deal of his own.

Thacker’s Jake Parker series was published with Bookouture in 2020, and he says they are some of the best books he’s written. And though he emphasizes that the publishers at Bookouture were fantastic, “as an industry, traditional publishing is, in fact, broken,” Thacker says. Among its faults, traditional publishers are stuck in a business model that favors selling print books over competing with Amazon and independent authors, he says. “They’re just a little bit antiquated.” As for the Jake Parker books, Thacker urges anyone interested in reading them to wait a few years—he’s hoping to republish the trilogy once his seven-year contract is up.

But for every problem traditional publishers carry, Thacker believes self-published authors have the solution. His answer comes in the form of a new traditional publishing company. Conundrum Publishing models a different approach to the publishing process, Thacker says. Where most traditional companies hire developmental editors, Conundrum brings manuscripts in front of “the roundtable,” a team of four or five professional authors in the same genre who can critique the books from a market perspective. Where other companies use human copy editors, Conundrum reduces cost by running books through a machine learning tool known as the AI Gauntlet. The books are then distributed to a two-hundred-person street team of beta readers and ARC readers. The company pays for advertising once the book is released and gets paid a percentage of royalties—it only succeeds if the author does, at no upfront cost to the latter. “I always tell people, at Conundrum Publishing, our MO is ‘authors win first,’” Thacker says.

Conundrum was born out of the publishing company Thacker started when he began publishing books, but it only officially launched earlier this year. Already, the company has signed between fifteen and twenty authors and is set to have published fifty books by the end of 2022. “There is so much that we could do as an industry that isn’t being done yet. We’re on the cusp,” Thacker says. “My goal is to be a part of that.”

When he looks to the future, Thacker has goals for every part of his career. He wants to grow his author business and continue writing, and he wants to help Conundrum grow as well. The publishing company exclusively publishes Thrillers at the moment, but he hopes it will one day expand to include other genres.

He has ideas for the future of the self-publishing industry too—a distinction he doesn’t always believe will be necessary. “We’re going to call it publishing in the future [instead of self-publishing],” he says, referencing a phrase he’d heard from Tumlinson. He believes independent authors are on the verge of gaining more recognition and a louder voice in the book publishing world.

When talking about another close friend, author Ernest Dempsey, Thacker shares nothing but praise for his dedication to writing and his work’s caliber. “He’s the pinnacle—the consummate professional, if you will. I’m always getting distracted by other crap,” Thacker says. But those side projects reflect Thacker’s dedication to helping other indie authors. And for every challenge and distraction that comes with author life, Thacker also sees reward in a simple fact: he likes to make stuff up for a living. “To be able to put all these things together in a way that I think is entertaining and that I think makes sense—it’s exactly the kind of stuff that I would’ve wanted to do as a kid if I had known that that’s what writing was,” he says. He hopes other authors at any stage in their writing careers can realize the same.

“I often get lost in the details. I often get stressed about how much stuff I have to do. And the best thing I can do for myself is remind myself that I’m a writer,” he says. “Writers write. Don’t lose sight of the core thing, the core activity, we do.”