Grow Your Audience and Your Publishing Skills by Organizing Anthologies 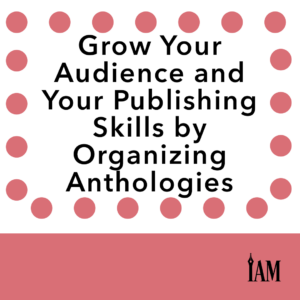 Are you an author who likes to volunteer your time for a good cause, find mentors, learn from your peers, or learn by doing? By organizing an anthology for your target audience, you can not only build your publishing skills and the audience for your books but also share the voices of other authors with new readers. Depending on your goals, you could even make the world a little better with your art.

But if you’re taking on the role of team leader, there are some things you should keep in mind before you get started.

The indie publishing world has a big heart. Anthologies offer some of the best examples of this—several authors choose to organize their first anthologies for a good cause, including Fantasy and Post-Apocalypse author J.A. Clement. For those who’ve entered a few anthologies as a participant and are ready for the next step, organizing a charitable anthology could be a good starting place, Clement writes. They “can be as simple as twenty authors putting in [three thousand] words each, volunteering their production skills, and then making a couple of hundred quid for a relevant charity. It might be small scale but … you’re learning the same skills you’ll need later … in a lower-stress environment.”

There are practical benefits too: Having a common goal inspires authors to get involved, and it simplifies the accounting. You wouldn’t need to worry about dividing royalties since you would donate the lump sum to a single account.

Of course, there’s more than one path to organizing your own anthology, and being involved with author groups may naturally lead to more collaboration. For Lasairiona McMaster, a steamy Sports Romance author, her entrance into the world of anthologies came when someone volunteered her to co-organize a Romance anthology in the 20BooksTo50K® Facebook group. Sometimes greatness is thrust upon you.

Clement, who has served as “facilitatrix” for multiauthor teams, takes her responsibilities more seriously than her title. “Anyone who is helping you with something is part of [your] team,” she writes. “These are [your] people and it is your responsibility to make sure no-one is bullied, talked down to, discriminated against, or otherwise made to feel bad. Everyone has the right to do their work with dignity and some basic respect.”

Planning, setting deadlines that don’t clash with one another, matching tasks to skills and interests as much as possible, staying in touch with everyone, and celebrating small and big wins are all responsibilities that fall on the shoulders of any anthology organizer and can make the difference between a thriving, excited team and a debacle. “Make sure you have one person for them all [the writers] to report to,” Clement suggests, “so that nothing gets lost or too far out of timetable.”

Don’t forget creative boundaries either. Robyn Sarty, Thriller author and publisher of several Fairy-Tale Retelling anthologies, recommends making genre expectations clear from the beginning, “especially if you want to go deep into your subniche.” And when working with a team of editors or co-organizers, Clement suggests deciding upfront “who gets the final say on edits, or the cover.”

Managing so many responsibilities is a lot for anyone to take on. It’s important to pay attention to self-care throughout the process. “Going into collaboration can be very powerful, but it can also be exhausting,” Clement writes. “Bear in mind that you’re going to have to give up some of the freedoms that make self-publishing attractive, because other people will now be involved.”

Anthologies can be great fun, but it’s essential to remember that you’re entering a business venture with anyone you bring onto your team—even close friends. “A contract is key,” Sarty writes. “It doesn’t have to be complicated, but it … takes the strain off of responsibilities and expectations.”

Contracts may include word limits, themes, formatting, deadlines, marketing and social media commitments, cost and royalty sharing, duration of the collaboration, and when authors can expect print, digital, and audio rights to revert to them. Remember to include any creative boundaries in your contracts.

Sarty recommends starting with a template contract like the one in Craig Martelle’s Successful Indie Author Collaborations. As for putting it into practice, Clement recommends using Basecamp project management software (https://basecamp.com) if the budget allows, or free tools like Google Docs or Dropbox if it doesn’t, to communicate and to keep track of submissions. Again, this is an area where planning will make you and your team much happier, she writes. We’ve all been in that last-minute indie publishing crunch for our own projects at least once, and none of us want to do that with our team watching us, she writes. “It’s really miserable if you’re left scrambling to meet a deadline on a brand new programme where you have no idea how it works,” Clement writes.

For a charitable anthology, you may not need to calculate royalty shares. But if you want to organize an anthology where the royalties will be split, you can choose to divide costs and royalties in numerous ways. Sarty’s publishing company covered editing, cover design, and marketing costs. McMaster took care of the cover and asked authors to “chip in for paid promo site newsletters” when they discounted the anthology. Clement prefers to divide up the royalties based on each collaborator’s work: “a percentage for those involved in the actual production work, and the remainder split either equally or according to word count.” The author and organizer points out the risks of paying off costs over time with royalties. “Anthologies can make a couple of grand, but if you want more, it requires a considerable marketing budget or an insanely large number of contributors and a very good cause,” she writes.

Splitting royalties can be complex, but there are tools to help. Depending on if and how you plan to pay your team members, tools like Draft2Digital’s payment splitting tool can automatically divide royalties among collaborators. “Depending on how you want to organize this box set … the organizer, is going to get—this might be unfair, but maybe they’re getting 50 percent and … the second 50 percent is being split among the contributors,” said Kevin Tumlinson, director of marketing and PR at Draft2Digital, in a February 2021 interview for the podcast Self Publishing Insiders. “You can set all that up, and it’s all automated. Taxes are all taken care of.” Mark Leslie Lefebvre, also of Draft2Digital, noted in the same interview that the tool saves organizers from excess foreign exchange fees for collaborations with international authors and can also send required tax documents to collaborators.

Draft2Digital isn’t an organizer’s only option; other programs offer similar services for dividing royalty shares across several price ranges. PubShare (https://pubshare.com)—previously known as BundleRabbit—charges 10 percent of the income to divide royalties as set by the organizer. PublishDrive (https://publishdrive.zendesk.com) offers two royalty splitting tools, a calculator called “PD Abacus” for $2.99 per month that can be used by authors who don’t have a PublishDrive subscription and “Team Royalties,” which require all authors to have a PublishDrive subscription and pay an additional monthly fee of $19.99 per “seat.” According to PublishDrive’s site: “The number of seats determines how many different co-authors you can have invited at the same time. One seat means a spot for one co-author who can be invited to unlimited teams. You can change who the co-author is without adding extra seats.”

For long-term royalty splitting, new technology is on the horizon. In a July 2022 interview with Roanie Levy of Access Copyright (https://accesscopyright.ca/), Joanna Penn of The Creative Penn podcast pointed out the value of blockchain technology. “One of the things that stops authors collaborating is that it’s so hard to do all of these royalty payments later on in the process. If you and I write a book together, one of us will publish it or we’ll get a publisher and then the money eventually gets to us or one of us has to split it,” Penn said. “With a smart contract … there can be a percentage for the fan who’s selling it that can be a percentage [that] goes back to the original creator or creators and a percentage could go to a charity, for example. … [Even] after my death … there’s a clause in the contract that will redirect the payments to a different wallet.”

Organizing more concrete details in an anthology ahead of time, like deadlines and royalty shares, is critical, but McMaster also recommends thinking about “alignment” early in the process. “You need … a clear idea of the purpose and goals of the anthology, and a solid knowledge of your subgenre,” she writes.

Authors may join an anthology to contribute to charity, build their skills, apprentice with more experienced authors or organizers, grow a broader audience for their work, improve their “also boughts,” or increase their income. Keeping this combination of goals in mind will help you and your team get the most from the experience.

As Clement puts it, “There’s a great deal of excitement in being part of a high-performing team; but also, perseverance and tolerance is needed from everyone for the bumpy bits of the road. So choose your team and make sure everyone has their expectations set the same.”

Anthologies offer opportunities for creativity and connection with other professionals and readers. Once you’ve deliberately practiced the skills you need for a successful collaboration, you can keep growing your publishing business and your audience with shared worlds, co-authoring, bundling, more anthologies, or publishing other authors.

Clement offers a final word of advice to those interested who haven’t yet published others’ work. “Forming a publishing house is quite hardcore,” she writes. “I should say that’s something for people who only want to write a couple of books but love the process. It requires a bit of self awareness. Experiment with the things you really excel at and the things you really enjoy; if that’s the production or marketing side more than the writing then it may be something to look into. … I’d start small with a couple of low key anthologies, [then] scale it up and see how you get on with the people-wrangling.”

For tips on bundling, co-authoring, and anthologies, read Get Your Book Selling with Cross-Promotion by Monica Leonelle. For sample contracts for collaborative work with other authors, check out Successful Indie Author Collaborations by Craig Martelle.