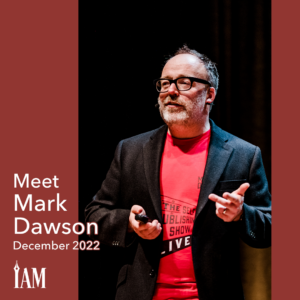 Seven years ago, Mark Dawson told the world in detail how he got his Thriller novels into the hands of hundreds of thousands of readers. His story came in the form of the inaugural Self Publishing Formula online advertising programs, and if you were a member of the Facebook Group or enrolled in one of the courses at the time, you had a front-row seat to hear an indie superstar’s modus operandi.

Mark has shared his story plenty of times since then, at conferences, in courses, and with indie authors around the world, in every stage of the publishing journey. But why? Wouldn’t sharing these secrets make his future success harder as more authors employed the same techniques?

It was a serious consideration back in 2015.

Mark went from frustrated traditionally published author to clumsy and unsuccessful self-published author to international success story in just a few short years. He learned at the feet of giants such as bestselling author Hugh C. Howey and adapted their techniques into a system that thousands of indie authors have used since.

At the center of his methodology is a combination of Facebook ads and a well-demonstrated, dependable mailing list strategy. But Mark realized early on that he had to nail the entire process to succeed. He’d set his books’ prices low, typically $3.99 or $4.99, so there was no room for “leaks” in the flow, he says. Eventually, he found a process that worked—but as time went on, he became frustrated watching other talented writers languish with few or no sales in their own businesses. That was the prompt to start sharing, he says.

“I used to spend a lot of time in the indie online forums,” Mark says. “I remember seeing a few success stories, but they were outnumbered by authors who simply didn’t know where to start, or worse, they were pouring money into advertising, but nothing else about their setup was right.”

So, in 2015, he founded the Self Publishing Formula. “It’s not the best name, on reflection, but we’re stuck with it,” he says. “There is no single formula. It’s better described using the adage coined by the British Cycling Team after their rise to global dominance: ‘the accumulation of marginal gains.’”

Mark understood what needed to be in place to succeed. He’d cracked the code of paid ads, though he admits he lost thousands of dollars while he learned before the needle started to rise.

“Creating SPF [Self Publishing Formula] was a huge task,” he says. “At its core, I wanted to offer professional, highly produced online courses that would take authors of all experience levels through the process of building a winning platform. I knew I couldn’t do it on my own, so I called two former colleagues from my film classification days, James Blatch and John Dyer. They immediately said yes, and SPF was born over a coffee at the BFI Cinema in Southbank.”

In the years since, Blatch has become well known in indie circles in his own right, thanks to his role as the co-host of SPF’s weekly podcast, the Self Publishing Show. In 2016, he began writing his own novel, and listeners have followed along with every bump in the road since then. Today, Blatch has two novels published, both selling well, and a third in the pipeline. “In many ways, James is the perfect example of what I wanted to achieve,” Mark says. “He started with nothing, not even a completed manuscript. Today, he makes a regular profit from his two Thrillers in a niche sub-genre. He’s got to that point by following the courses he himself helped to create.”

Blatch is far from alone in his success, and Mark’s decision to share his hard-won wisdom with other authors has certainly had a ripple effect on the indie author community at large. But has it cost Mark sales in exchange?

“Probably,” he admits. “I think it’s quite likely that I could have made hay for a little longer while others caught up. But that’s not something that bothers me. And while several thousand authors have followed my methods in detail, it’s still a drop in the ocean.

“The sad truth is the vast majority will not engage with the marketing side of publishing,” he continues. “They’ll write a few books, become frustrated with lack of success, and most likely give up. I’m not talking about the authors we interact with in the groups. I’m talking about those who don’t even get that far. The fact that someone is reading Indie Author Magazine or listening to the Self Publishing Show immediately elevates them above the masses. You are much more likely to succeed just by immersing yourself in the online world of indie authors.”

For its part, the Self Publishing Formula offers authors plenty of opportunity for such immersion in the community. Its Facebook group is host to a thriving community of indies. The Self Publishing Show podcast has become a renowned resource for writers, with guests from every corner of the industry. “We’ve released more than 350 episodes now—that’s nearly seven years,” Mark says. “I won’t say it’s an easy task. It’s not. James in particular has to carry out an interview each week, and we have a small army in the background making sure we get a fresh episode out every Friday. But it’s become a bit of an institution in the indie world. We don’t restrict ourselves to marketing either—the show is a place where we talk as much about craft as we do business. We also feature traditionally published authors and industry figures from all areas. It’s been a fascinating experience. We’ve had a front-row seat as publishing changes forever.”

And beyond the Facebook Group, the Self Publishing Show, and Mark’s own ads courses, the group also boasts two acclaimed premium courses, Advertising for Authors and Launchpad.

“Launchpad, as the name suggests, is the starting point,” Mark says. “Split across ten modules, it’s the largest course we offer, including a comprehensive technical library for those tricky processes we all need to master. The course is designed to take an author from typing the words ‘The End’ to making a steady income from book sales. Ads for Authors is the next step. To continue the space analogy from Launchpad, thisis the fuel that you need to really lift off.”

Both courses are open for enrollment at specific times of the year, he says. “We like to onboard students in batches. As an organization, we spend as much time making sure authors get value from the courses as we do creating them.”

Besides the two courses, the Self Publishing Formula also has three “evergreen” options that are permanently available. These cover the craft side of the industry, something Mark himself stays away from.

“I’ve never felt comfortable teaching the craft side of writing,” Mark admits. “I don’t analyze my writing to the point where I understand how or why it works. But others do, and we are very lucky to have Suzy K. Quinn as the author of our writing course, ‘How to Write a Bestseller.’ In addition we have Stuart Bache, who has worked on designs for Stephen King and John Le Carré, presenting ‘Cover Design for Authors.’ Finally, we have Jennie Nash—somebody with immense industry experience as an editor—and ‘How to Revise Your Book.’ Combined, these three courses take an author from staring at a blank page all the way to having a polished manuscript and a killer publishing package. By then they’re ready to embark on the commercial side of their business, which is where I step in.”

From where he started in 2015, Mark’s success—and his status—have undoubtedly blossomed, and if the self-publishing industry’s own growth is anything to go on, there’s little sign of it slowing down. Any sign of the seven-year itch?

“Absolutely not,” Mark says. “The indie world is thriving, and we are too. And if there’s ever a moment when I think it’s all a bit much, I visit our testimonials page and listen to the many authors we’ve interviewed about the success our courses have given them—writers like Shayne Silvers, who unbeknown to his wife had to cash in their life savings as a last-ditch attempt to invest in his author career. Now he’s a millionaire and a writer adored by his many fans. There’s also the amazing Lucy Score, sacked from her job when they discovered she was writing Steamy Romance on the side. It was the investment in Ads for Authors that saw her and her partner Tim turn her books into Amazon number 1 bestsellers. And there are plenty more, including authors who make enough to pay their mortgage each month or can quit the nine-to-five job they hate. That’s all the motivation I need to continue SPF.”