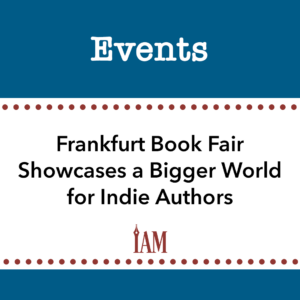 Going to the Frankfurt Book Fair is a jolt of adrenaline for book lovers.

For the past seventy-four years, from all the regions of the world, publishers have been coming together to show off their beautiful work for readers, and as an indie author, you are part of the trade. Each year, the six-plus buildings house the main events of the Olympics of publishing, and any author whose inspiration is flagging will surely benefit from riding up the escalators and strolling the skyways and courtyard, where the action takes place.

The massiveness of the fair is also the biggest challenge. Because it is so big, other organizations nest their annual meetings inside it: receptions, readings, #BookTok in the outside courtyard called the Agora, and an event called BOOKFEST, an international cultural festival that’s free to the public. At this year’s event, held October 19–23, 93,000 trade visitors came to buy and sell rights for books, and 87,000 visitors from the general public came to watch the pageantry, according to a press release issued by event organizers.

This year’s theme was “translation,” and the King and Queen of Spain opened the fair after a year in which the translation market for Spanish books boomed. President Volodymyr Zelenkskyy of Ukraine also presented at the fair, appealing to attendees in his six-minute recorded speech to fight against terrorism. “Keep writing about it. Keep reading about it,” he said. “Create, publish, and distribute books.” There were exhibitor stands for ninety-five countries—from Canada to Malaysia—because books are a way to talk to each other across political and geographic borders. Fair organizers have already announced Slovenia as next year’s guest of honor.

For those who are interested in watching the book Olympics from home, the Publishing Perspectives newsletter has been covering the fair in English since 2009, according to its website. Download this year’s fair magazine at https://publishingperspectives.com/frankfurt-book-fair-2022/#magazine, or subscribe to the organization’s newsletter at https://publishingperspectives.com/subscribe/.

It’ll make you proud to be part of it all.

If you thought the number of books published every day on Amazon was daunting, you can feel truly invisible—and excluded—in Frankfurt. How will readers find your work when there’s so much to choose from? In addition to the massive volume of books, there are also still parts of the fair where self-published authors aren’t permitted.

As an author or publisher, you can attend both the “trade” days, Wednesday through Thursday, and the public days, Friday and Saturday, of the event. Literary agents—three hundred in 2022—maintain a fortress in the LitAgerary Agents & Scout Centre (LitAg), where authors aren’t admitted without an appointment made weeks or months in advance. The largest publishers’ stands are full of small tables and chairs, surrounded by shoulder-high walls displaying new releases. Inside these glowing corrals, agents and acquisition editors flip through book catalogs and negotiate deals. It’s literary speed-dating.

If you are an illustrator, you might get close enough to show your portfolio, but as a humble wielder of words, you are confined to the remaining four thousand exhibitor stands, the outside courtyard called the Agora, the Congress Center, and various other venues in the city of Frankfurt.

Not to worry; the story isn’t over yet.

If you ever thought there was only one way to publish a book, the Frankfurt Book Fair will cure you.

The “Publishing Perspectives Forum,” held on Wednesday and Thursday, offered a lifeline for indie publishers at the fair. The annual forum can be a good place to meet other like-minded authors and publishers and to have your mind blown once or twice before you go home to your creative business. Every publisher has the challenge of making their books visible, and several speakers in the forum emphasized big publishers can pay more for both keywords and social media influencers compared with small, indie publishers. Sound familiar? Once again, there’s more to the story.

It’s helpful to catch a glimpse of other publishers’ creative processes. What shifts your mind into productive overdrive is unique to you and your work, but here are a few mind-blowing moments from this year’s forum:

Author and translator, Lawrence Schimel, gave his personal insight on how to work the fair, saying, “You need three Frankfurts” to ink a deal. The first time you attend the Frankfurt Book Fair, people say, “pleased to meet you,” he said. The second time, they say, “okay, you’re serious,” and the third time is when contracts are drawn up.

Rüdiger Wischenbart, founder of Content and Consulting and moderator of the session, called tasks like creating a summary, collecting sample translations, compiling five key selling points per book, and an author interview the “hard, basic homework of publishing.”

“You become visible by going out where you can be seen,” said Benas Barantas of Book Smugglers Agency. “Make it [your marketing plan] as personal as possible, because the pandemic shows that people need more personal connection. Maybe that’s the secret sauce.”

The business model for the UK publisher Unbound is a combination of crowdfunding to test a book’s potential audience, followed by traditional publishing for the projects that prove themselves. Pointing out that every new social media platform has gone through a slide from “authentic” to “paid,” Unbound encourages readers to have a “more intimate” connection with authors.

Pei-shan Huang is publisher and editor-in-chief of Slowork Publishing in Taiwan. She’s also a graphic artist. She silk-screened three hundred copies each of four graphic novels a year, but it wasn’t enough content to grow a big audience. Readers in Taiwan were unfamiliar with the graphic novel genre. “We need more publishers,” Huang said.

How can readers find your work in 2022? These small publishers highlighted consistency, the “hard, basic work” of publishing, “going out where you can be seen,” staying true to your authentic vision, and—most surprising at the book Olympics, considering its size—more competition as a way to create more readers in your genre.

One of the resounding messages of the 2022 fair was that, today, there are more ways than ever to get your work seen.

In 1622, Shakespeare’s “First Folio” was introduced at a Frankfurt Book Fair around seven years after the playwright’s death. Although famous in English-speaking countries in his own lifetime, the first print publication of his work made him an international “literary legend.”

The printing press created a book industry. The pandemic forced publishing to create new networks. In 2020, the Frankfurt Book Fair made more technological leaps, broadcasting from the fairgrounds and creating new tools and a virtual experience. Many publishers and agents reached out in new ways during this time.

In the Publishing Perspectives Forum, a senior rights agent reported using contact information from the fair to make the “highest number of rights deals in five years” via Zoom and email. The Frankfurt Rights database (https://frankfurtrights.com) is free to access for rights “Buyers.” According to Thomas Minkus, vice president of English Language Markets for the Frankfurt Book Fair, in a seminar for the fair in 2020, this tool was created “to facilitate what we usually do in Frankfurt.”

By now, you might have serious FOMO. “It’s all very nice,” you may be saying, “but I can’t get to the Frankfurt Book Fair.” With the size of the event, even attendees can feel like they’ve missed out on key takeaways. But we’ve got good news—the Frankfurt Book Fair offers plenty of opportunities to browse at home. This year’s highlights can be found on the fair’s website: https://buchmesse.de/en/highlights/media-library. You can also visit the Frankfurt Book Fair website under the “Events” tab to find a new opportunity or idea for your indie business. Note the checkbox to search only expired events with recordings.

If the search form paralyzes you or you want more bite-sized insights from the book Olympics, the Publishing Perspectives newsletter shares news and articles related to the global publishing industry. It’s like Publishers Weekly, but for the whole world. Download a free magazine on the organization’s website to learn more about the 2022 Frankfurt Book Fair, NFTs, publishing in China, or other topics.

Even if you weren’t at this year’s fair and have no immediate plans to visit, your work can be part of the worldwide conversation. If the fair’s history is any proof, keep on keeping on with the hard, basic work of publishing, use the available technology, and maybe the Frankfurt Book Fair will remember yourbooks in the year 2422. It worked for the bard!