Breaking Down the Difference Between New Adult and Young Adult Fiction 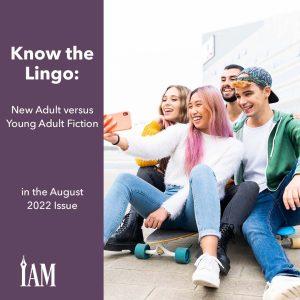 We all know what a “young adult” is—after all, we’ve all been one. But as it turns out, we’ve all been “new adults” as well, a lesser-known age range that directly follows young adulthood. Over the years, both “young adult” and “new adult” stages of life have sparked genres of the same names, and though the two terms sound similar, whether discussing the age ranges or the fiction representing them, the two couldn’t be more unique.

New Adult (NA) is a developing area in the publishing industry. The term was first used by St. Martin’s Press in 2009, when the publisher put out a call looking for submissions for “fiction similar to YA that can be published and marketed as adult—a sort of an ‘older YA’ or ‘new adult’ … with protagonists who are slightly older than YA and can appeal to an adult audience,” according to an archived version of the publisher’s website.

NA is an age category that comes directly after Young Adult (YA). However, because NA is still in its nascent stages, authors and readers alike often confuse the two. NA—like its counterparts, YA, Middle Grade, and Adult—encompasses many genres and subgenres. Although an author could write both YA Contemporary Romance and NA Contemporary Romance, the two are vastly different.

So what are the similarities and differences between NA and YA?

In YA, protagonists tend to be on the younger side. They are typically aged between fifteen and eighteen years old. NA, on the other hand, skews slightly older: Protagonists usually range from eighteen to twenty-five and, in some cases, up to thirty years old.

Stories with teenage characters are usually, though not always, set in or feature a high school or academy. Even if the protagonist has left school early, there is typically a reason for this. NA stories tend to be set in college or graduate school after the character has left home. NA stories can also feature characters getting and settling into their first jobs or internships.

However, academy settings could feature in both YA and NA. In these stories, the character’s age, the type of academy—a high school or secondary school academy versus a college-type academy—and themes are usually solid indicators of whether the story is classified as YA or NA.

YA tends to skew toward Sweet or Clean Romance. First love and teenage angst are often seen in YA, and the heat level follows accordingly. At most, YA features fade-to-black scenes with a focus on the emotional impact on the characters rather than the physical.

NA, on the other hand, tends to have more room for spice. Open-door scenes with a focus on both the physical and the emotional are not uncommon. That said, just because a story is classified as NA does not automatically imply heat or spice.

The difference in age between YA and NA protagonists tends to correspond to the differing themes present in both age categories.

YA stories are often about coming of age and focus on themes such as finding one’s place in the world or first relationships, along with a healthy dose of teen angst. NA fiction, on the other hand, tends to focus on characters leaving home for the first time, their education or career choices, first jobs and internships, and finding their sexuality, engagement, or marriage. In NA, the protagonist takes the first steps outside the comfort of their home, learning to navigate the troubled waters of adulthood.

As NA is a developing age category, the difference between YA and NA fiction is not always obvious, especially on retailers like Amazon.

Crucially, the NA category does not exist on major book retailers, including Amazon, which, like most distributors, uses the Book Industry Standards and Communications (BISAC) classification system, one of the world’s most common book classification systems. NA does not feature on the BISAC Subject Headings list. And no feature on BISAC means there’s no category with distributors.

As a result, NA authors tend to categorize their NA books as YA. It’s not just the indies—it’s the big publishers as well. A well-known publisher placed a famous NA fantasy series in the YA category, and those books were even chosen as “Editor’s Picks” for YA.

Due to the differences between YA and NA outlined above, the lack of NA on the BISAC Subject Headings list is creating widespread problems, and the ripple effects are felt by both YA and NA authors and readers. If a reader browsing the YA categories on their favorite retailer is searching for a clean story about a teen saving the world and instead gets a story with heavy romance and spice because the book is classified as YA on the distributor’s site, they won’t be happy. This could, in turn, lead to negative reviews, thereby hurting everyone in the process.

So what can authors do?

First, ask BISAC to add NA to its list of Subject Headings and allow the change to trickle down to Amazon and other major retailers. The BISAC website has a helpful suggestion form. In the meantime, to avoid further confusion, NA authors should look into delisting their NA books from YA categories or prevent confusion from happening in the first place by placing their books in the adult categories—that is, until such a time when NA becomes an officially recognized subject heading by BISAC.