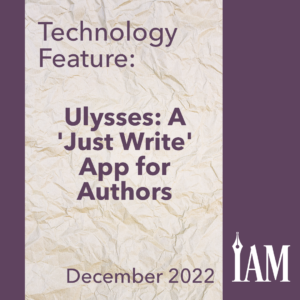 I’ve written at least one book with darned near every major—and most of the minor—writing apps out there on the market: Google Docs, Microsoft Word, 4theWords, Atticus, Scrivener, Novlr, Pages. I’ve even written a book in Vellum before. Trying out new writing software has become something of a hobby of mine over the years.

But the app I keep coming back to is called Ulysses.

Ulysses bills itself as “The Ultimate Writing App for Mac, iPad and iPhone.” They may actually be on point with that description, but I’ll let you judge for yourself. That one-liner also encapsulates the sole drawback to using Ulysses: It’s for Apple devices only. There’s no Android or Windows version, and I don’t believe there are plans to make one.

That said, for Apple device users, it can be a reliable and user-friendly piece of software. I’m using it to write this article, in fact. And of course I’ve written many novels in Ulysses as well. With a flexible and extensible tree structure for files, a system that allows users to search by keyword so you can find just the right file, a “Markdown”-based writing experience so one’s fingers never leave the keys, and the most reliable cross-device file syncing I’ve ever seen in a writing app, Ulysses certainly stands out among the crowd.

Ulysses is built around a tree-style file structure, similar to Scrivener. This is one of the things I like best about the app. It allows me to set up a category for a series of books, then a subcategory for each book, and individual pages within the subcategory for each chapter. At a glance, I have all of my books there, easy to find and look through. There’s no note board like Scrivener has, but you can reorder chapters with little difficulty.

Pro Tip: I use the tree file structure to organize my books as well. Each file is a chapter, and each chapter is nested inside a group of files for a novel. Each novel is then nested inside another group for that series of novels. This lets me quickly find specific chapters from books I wrote years ago with just a few clicks.

You can also assign keywords to files, allowing you to search for just the right scene or chapter based on its tag. For example, you can assign character keywords to note which chapter files feature which characters or to divide chapters by viewpoints.

Ulysses works on all Apple devices and stores its data in iCloud by default, though you can also have it back up via Dropbox. I’ve left it on iCloud, myself, though I export finished works to Dropbox for long-term storage. The synchronization across devices is peerless. For me, this is exceptionally important because I’m often working on my iPad and sometimes even on my iPhone. The files transfer fluidly and almost instantly between all internet-connected Apple devices, and Ulysses works like a dream on iPads and iPhones, as well as Macs.

Formatting documents in Ulysses can be a bit of a learning curve thanks to its feature called “Markdown.” Markdown is a way of formatting your text in-line by using visible characters. For example, if I want to show something in italics, I type an asterisk before and after the word. If I want it in bold, I put two asterisks before and two after the bolded section. There are several Markdown elements, including things for quotes, headers, code blocks, and more. Ulysses saves the files in Markdown, but when you export the compiled work, the app automatically changes the Markdown shortcuts into formatting. More advanced formatting features are also available at the time of export, including options to design your own specialized export formatting.

For many writers, this feels more seamless. I don’t have to remove my fingers from the keyboard to select text and bold it, for example. I don’t even have to move my hands to hit Command+B. I can just hit a couple of asterisks and get the same effect. It’s not a huge time saver, but it does have an impact. And it takes a wee bit of getting used to if you haven’t played with Markdown before, but don’t worry; once you get the hang of it, the feature can be super easy.

Ulysses exports in PDF, EPUB, HTML, DOCX, RTF, TXT, and a few other formats. Because it was designed for bloggers, it also can be connected—and export directly—to WordPress, Ghost, or Medium blogs.

On the writing side, the built-in proofreading function can cover all your basic grammar and spelling needs. It doesn’t have all the bells and whistles of something like ProWritingAid, but it’s comparable with the checks in Microsoft Word, for example. You can also set deadlines for yourself. With a few clicks, I can go into any file or collection of files and set targets and goals. These can be characters, words, sentences, paragraphs, or even pages. Ulysses then tracks how close I am to my goal with a visual image of a filling circle.

Personally, I write in Ulysses with the sidebar showing all my chapters laid out on the left side of my screen. But if you prefer a distraction-free writing environment, Ulysses can do that too. You can easily make the sidebar vanish and turn the entire screen into a blank page, ready for your work.

Ulysses is a software-as-a-service (SAAS) application; that is, there’s an ongoing subscription fee to keep it active. I confess that when the developers first switched to this system in 2017, I was not a happy camper. I generally don’t like SAAS applications. I much prefer paying once and not being charged again. I dropped Ulysses and went off to try a bunch of other apps.

Yet I came back to Ulysses because, in spite of the annual fee, it’s simply the best app I’ve found to do my work. The powerful synchronization between devices, simple but flexible export system, and terrific file organization structure make this my tool of choice.

Pro Tip: Subscribers can suggest new features they’d like to see implemented, and the development team is extremely responsive toward user requests. This lets us as users help steer the course of future development for Ulysses.

A subscription costs $5.99 a month or $39.99 a year; students can get a slightly reduced rate of $11.99 for six months, and there’s a fourteen-day free trial to give it a shot before you buy.

In return, the developers are actually pushing hard to continue work on the program. For example, when the M1 machines first came out, Ulysses came out with a patch immediately, and my work wasn’t interrupted by even a single day of bugs. Likewise, in all the years I’ve used Ulysses, I’ve never had issues making it work with a new operating system update. The developers stay enough ahead of Apple’s operating system releases that it’s generally a bug-free experience.

If that’s the results of users spending forty bucks a year for the app? I figure I’m getting my money’s worth.

Give it a shot!

A writer’s chosen tool is something that’s incredibly personal, and no app is going to be perfect for everyone. But this one is particularly good, and I recommend giving it a test run to see if you like it. With the program’s free trial, there’s really nothing to lose but a little time, so pick up your iPad or Mac, download Ulysses, and give it a spin. In my experience, it’s one of the finest writing apps available today.