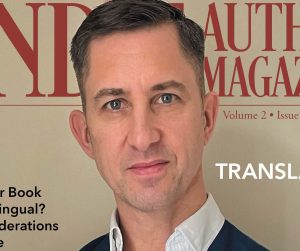 Steve Higgs is a man of contradictions—a tough ex-army man who writes about a bad-tempered, crime-solving police dog and a bored housewife-turned-sleuth. He’s also known as the British author who wrote over sixty books in three years. He is funny, a family man, and yet hyper-focused. He puts some of his success down to having the luxury of a garden shed, or as he calls it, a “log cabin” at the bottom of his garden that allows him to lock the door and write all day. But how did he get to the point where he earns seven figures, far outstripping the income of his previous full-time career?

Steve showed promise as a writer at the age of ten when he won a school competition in southeast England. He was invited to read his story on the local radio station, and as he put it, “It just kind of stuck with me.”

His family offered very little support, however. When Steve turned seventeen, he joined the British Army as eight generations of Higgs had done before him. But the story bug never let go, not even during his twenty-five-year military career, which ended with his retirement as Capt. Higgs. Steve says, “There’s a lot of downtime in the army. So I’d make up stories in my head but never find the time to write them down.”

He soon worked a well-paid corporate job, but when he was too busy for his baby son for days at a time, he knew something had to give. During 2018, while employed full-time, he wrote six books, often during his lunchtime. In 2019, he doubled his output, quit his job on his son’s fourth birthday, and began writing full-time.

During his army days, Steve got used to sleep deprivation. He says, “You don’t need nearly as much sleep as you think you do.” True to his words, he gets up at five o’clock and starts working shortly after, fueled by copious mugs of coffee.

He set himself a challenge to write thirty books in twelve months and only came up short by one book. “I failed,” he says, half-jokingly. To date, he feeds five ongoing series with a new book every two to three weeks.

Not Your Typical Cozy Mystery Writer

Steve writes in two genres, Urban Fantasy and Cozy Mystery. His first book was an Urban Fantasy novel about a paranormal investigator who refuses to believe in the supernatural. Everything he writes is infused with humor and hilarity, which has earned him a loyal following across both genres.

Why does a tough ex-army officer write Cozy Mystery though? Interestingly, when Steve created his character Patricia Fisher, he had no idea he was writing in the genre. In fact, he didn’t even know the term until it popped up in readers’ reviews of his books. “I’ve never read a Cozy Mystery in my life to date,” he admits.

Steve grew up watching series like Murder She Wrote, Midsomer Murders, and Miss Marple. In contrast, during his army career, he witnessed enough savagery that he didn’t want it to spill into his writing. There is no blood spatter, no arterial spray, and no sex on the page. He only recently realized that that was his author brand. “I write fast-paced, adventurous mystery books with a humorous lilt,” he says.

But how is he so prolific? How does a writer create a book a month? While writing his first few books, Steve was so unsure about spelling and punctuation that he kept a grammar book and a dictionary on his desk, which he consulted all the time. In his words, his early books are a little rough. But even today, he sends his first draft to his beta readers, and after making corrections, he publishes the book. For him, the story takes precedence over editing or revising.

Initially, he got some poor reviews due to typos, but because he writes so much, he managed to hone his skill as he published book after book after book. His readers love him, his novels sell like hotcakes, and his writing has gone from strength to strength.

Steve loves that instead of creating new content, he can repackage his original novels and earn extra money selling paperbacks. In fact, he’s been doing this since his very first book because to him, books meant hard copies. He had no clue that people read novels in electronic format. So he hired somebody to make him a cover and uploaded it. But because the formatting wasn’t done professionally, his 113,000-word door-stopper novel was so expensive, he didn’t think he could charge any more than the printing cost. As a result, he made two cents per copy sold.

To this day, Steve has never formatted a single book. He creates a Word document and then asks an assistant to upload it to IngramSpark, using a free code issued by the Alliance of Independent Authors (ALLi) (https://allianceindependentauthors.org).

Where Does He See Self-Publishing Going?

True to his philosophy, Steve has no time for the latest publishing trends like Vella. “I keep telling people I don’t know what I’m doing, and they laugh at me because they assume I’ve got all the secrets.”

Which he insists he doesn’t. Instead, he focuses on what comes naturally to him: “Writing fast-paced, fun adventure that just keeps building momentum to the explosive ending.”

When pressed, he admits that he does have his own dreams about using Kickstarter or YouTube to produce a TV pilot and selling it to Netflix or using it himself. He thinks that indie authors could go into that space in the near future to produce their own web series.

But he also doesn’t want to overstretch himself with yet another new subject to learn. “I don’t want to run too fast because I’m enjoying doing what I’m doing,” he says.

Does He Consider Himself Successful?

Steve’s been remarkably open about his success, going from earning seventeen dollars in 2017 to five figures per month last year.

Readers recognize him on the street. A British TV channel has approached him about turning his Patricia Fisher novels into a television series. Even his family members have changed their tune after initially laughing at his dreams.

When asked what success means to him, Steve becomes pensive. “I never set out to make a lot of money. I never had that in my head.” All he wanted was to supplant his existing wage to support his growing family and pay for little luxuries like an excursion to the zoo or brief trips abroad. Most importantly, he can now spend time with his young children whenever he wants, and that, to him, is the most important change of all.

Steve’s advice to new writers is simple. “Don’t quit. I could have stopped a long time ago when my first book came out and I got rubbish reviews.”

When he wrote every day and no money was coming in despite publishing five books, he could have stopped. Days passed with no page reads. It took another year for sales to pick up with the publication of his Patricia Fisher series. If he had quit then, he would have never gotten the chance to do what he loves—writing, spending time with his family, and living life the way he wants. To learn more about Steve, go check out his website at https://stevehiggsbooks.com.