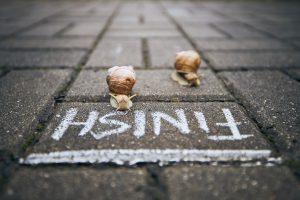 Could rapidly releasing your books be the fastest way to financial success? Well, it might be one of them.

What is “rapid release?” The rapid release strategy is to publish each book quickly enough that the previous book in your series is still in its launch window, allowing you to take advantage of the extra visibility during the first thirty days of release. It sounds just like writing fast, doesn’t it? Well, hold on to your hat, because there’s so much more to it.

In her popular talk at the 20Booksto50k Vegas 2021 conference, Elana Johnson explained that rapid release is more than just writing and publishing quickly; it’s about the processes that sit behind the books you produce. You have to be able to manage a launch schedule for each book.

In her successful book Writing and Releasing Rapidly, Elana tells us to write fast, an estimated five to ten thousand words a day in order to release a full-length novel every month, although it is also possible to queue books up for release. But there are other considerations; those books require covers. You need the resources to buy those covers or design them yourself, and they need to be edited. Having one book edited can be expensive—can you afford to have three books edited before you get royalties from the first one? Can you find an editor who is available to work to your schedule? Then don’t forget the formatting! And finding speedy ARC readers.

Elana uses a mixture of soft, medium, and hard launches, each requiring a different amount of effort. The first and last books in a series would be launched hard with all the bells and whistles of ad campaigns, mailouts, newsletter swaps, and social media campaigns, while the others would have less time and attention spent on them.

In the popular book HELP! My Launch Plan Sucks by Mal and Jill Cooper, Mal explains that at one point she was writing a book a week but with only the bare essentials of marketing. It’s important to her to keep enjoying what she’s doing, which is of course, another important component to success in writing. Mal says, “Releasing a book a week forever and always feeling like one’s under the gun is not a great way to enjoy life. I was burning out.”

Good news! You don’t have to release that fast!

It is possible to line books up for release so you don’t have to produce a book a month, but you do need to know how long it will take you to produce your novel. That includes everything from writing to launching and marketing.

Writer and Publisher Michael Anderle stresses that the most important consideration for someone thinking of trying to rapid release is “Setting the expectations of your readers on what time frame you can really handle and deal with. If you are an eight-week-between-books person then start that way and stay that way. It might suck in the beginning that sales go slow, but you won’t regret it later when sales nosedive because fans have dropped you after missing your release.”

Be honest with yourself about what you can deliver.

Author Craig Martelle recommends planning your release to broaden your reach and increase sales. In his most successful series, he released ten books in ten months. His non-fiction book Release Strategies is another popular book that covers this subject. In it, Martelle lists the pros and cons of his personal experience of rapid releasing.

Work through the following questions to determine if rapid releasing is something that you can make use of, and if so, how. Once you’ve answered these questions, you’ll be in a great position to know if you’ll be able to make a go of it, or at least, work out what you need to do to prepare for a rapid release of your next series.

Have you researched the strategies other people have used? Several sources are mentioned in this article, and you can look at free videos on YouTube. Make sure you’re not reinventing the wheel, listen to the hard-won knowledge of those who have gone before you. Most importantly, plan a release strategy that will keep you motivated and enjoying the process.