Plotting a Book vs. a Screenplay 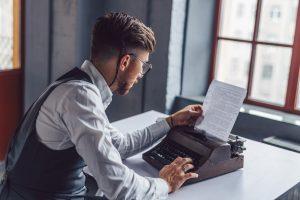 You’ve finished your novel, published it, received rave reviews, and sold lots of copies, and now you want something more for your story. You can see your characters on the big or little screen, living out the words you wrote and entertaining those who may not otherwise know of your book. You aren’t sure where to begin, and you cannot afford a screenwriter, so you decide to initiate the transition from book to screen by creating your own screenplay. But writing a screenplay is much different than writing a book, and blindly jumping into this type of writing will leave you flailing in the forgotten pits of the movie and TV industries. Yet it can be done as many novelists have proven. The only sure way to give you a chance at success is by learning about writing screenplays.

Screenwriter John August notes a vital difference between the novel and the screenplay: “Novels are a final art form—you write a book and that’s it … Screenplays, on the other hand, are one link in a long process leading to the final art form: a movie” (https://johnaugust.com/2007/novel-or-script). This basic distinction provides a lot more insight than one might first think. It states that your screenplay is not the final product and, therefore, is not written how a novel is. This becomes clearer when you plot your screenplay.

The plot of your screenplay or novel is the major events that occur. The story is the dramatic telling of those events. While plotting a screenplay and novel are similar in that regard, the screenplay plot resides within three acts while the novel is often told in five stages (exposition, rising action, climax, falling action, and resolution) but ultimately doesn’t require a strict structure. The three acts of a screenplay are the setup, the confrontation, and the resolution. Within these acts, many parts of your story occur, but the structure of the screenplay is always the same.

The first act, the setup, introduces your hero and secondary characters while also revealing the inciting incident, which is the first plot point and occurs at the end of the act. This demonstrates the main conflict and drives the movie toward the next act. The second act includes raising the stakes of your conflict so as to heighten the need for resolution. This part of the screenplay also includes obstacles for your hero to overcome as well as the midpoint of the movie, which usually is a story twist followed by crisis or disaster. This leads to the height of the climax and right into Act III. The third act includes the descending action, resolution of the conflict (bad or good), and the end.

Once you have the structure down, you will usually follow that with a beat sheet, which “identifies the key emotional moments in a story, while the outline expands on those moments with specific scenes, settings, and details” (https://www.masterclass.com/articles/what-is-a-beat-in-screenwriting#4-types-of-story-beats) This Masterclass article not only breaks down each section of a beat sheet but provides twelve steps for creating your own before writing the screenplay.

The three acts and beat sheets are vital to screenwriting; however, just as with novels, unless you read screenplays, it is extremely difficult to learn how to write and plot one. Author and screenwriter Solomon J. Powell highly recommends ScriptSlug (https://www.scriptslug.com) as a valuable resource. This tool assisted him in his own journey of transitioning from children’s book author to screenwriter. He recommends reading the most current scripts. Although the older classic movie scripts offer excellent information, the guidelines on writing screenplays change often, and the newest scripts will reveal the latest formats.

But it’s not always enough to just read the screenplays. Novelist and screenwriter Oz Mari Granlund advises you to read multiple scripts while you watch the movies. By doing this, you can see how the three acts and plot points are put into action. You can use the scripts while watching to identify the importance of plot structure in a movie. Then, watch movies without the script to find these elements on your own. This gives you excellent guidance in how to master the structure, and once you have a solid grip on it, you’re ready to begin your screenplay. This is where the differences between novels and screenplays can really confuse you if you’re not prepared.

When reading screenplays, you will find little to no description. As novelists, we drench our work in description because we provide the entire visual for the reader. No movie or TV screen shows the reader what is happening. Unfortunately, that can translate into trying to write a screenplay because we want to show our vision for the final product. But writing too much detail into a screenplay can not only bog down your script but also encroaches on the director’s role. Remembering the words of John August, the screenplay is only one step in the making of a movie or series. The screenwriter is simply the writer of the script. The director takes that script and uses their creative vision to bring the script to life on screen. So how much description should you use? Final Draft, a popular screenwriting software, states on its website that “each section of description should be contained to four lines or less” (http://finaldraft.com/learn/write-better-description-screenplay.) This is why reading scripts of already-made movies is so important. Those will show you acceptable levels of description and help you learn where your novelist brain needs to back off.

When writing a screenplay, remember the basic rule that one page generally equals one minute of screen time. This will help guide you in what goes on the page. If your first screenplay is three hundred pages, you’ll instantly know this is approximately a five-hour movie, which won’t work. Research the length of popular movies in your genre to assist you in knowing how many pages are needed. But keep in mind that just because Hamlet clocks in at just over four hours doesn’t mean your script should, especially if you are a novice to screenwriting. A typical screenplay runs between 80 and 130 pages, and a long script from a first-time writer can be a red flag to studios and producers who sift through screenplays and dump approximately 95 percent of the ones on their desks.

When going back and reducing your script to an acceptable page number, ensure that you are not removing anything that will create plot holes. These can easily occur when you eliminate something vital to your three acts, plot points, or beat sheet. If you’ve ever watched a movie that seems to be missing something important to tie sections together, you’ll understand the importance of not leaving plot holes in your final script. Scripts can be shortened by removing tropes, excessive dialogue that doesn’t move your story forward, and fluffy adjectives. Just watch those plot holes because, as Granlund says, “Plot holes aren’t cool.”

While so much is involved in developing and writing a screenplay, you will be off to a great start of turning yourself from novelist to screenwriter and being successful in both worlds by following these guidelines and researching the craft.