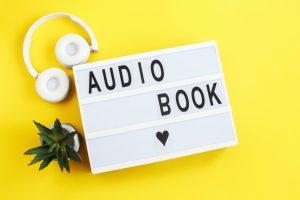 Sometimes the best books are the ones we don’t read.

That’s not necessarily referring to those books we leave languishing in our to-be-read piles though those deserve plenty of love and recognition as well. No, there’s just something nostalgic about having a story told to you rather than reading it yourself. Perhaps it’s the memories of hearing bedtime stories while drifting off to sleep or sitting cross-legged on a scratchy carpet for read-aloud time in grade school. Or maybe it’s simply remembering learning to read as a mentor’s voice helped you sound out the trickier words.

Of course, nowadays, as adults struggle to fit reading time into their day-to-day lives, many people are trading in their paperbacks for earbuds for an entirely different reason. Amid commutes around town, multitasking at home, hectic schedules, and ever-growing to-do lists, it’s no surprise that a little more than one in five Americans, according to a study published in 2021 by Pew Research Center, opt to listen to audiobooks—the paperback’s more portable, accessible sibling.

In recent years, both audiobooks and podcasts have seen an uptick in listenership. According to Axios, consumption of spoken-word media has increased by 40 percent in the US since 2014. And in 2021, IBISWorld reported the audiobook industry was worth $1.1 billion. For the independent author, the audiobook industry offers plenty of opportunities to reach more diverse audiences and create another revenue stream—but it can be an expensive investment to start, and just like anything, it’s important to consider all your options beforehand.

Beyond the rapid growth of the industry as a whole, audiobooks can provide independent authors with a direct—and sometimes lucrative—additional source of income. Depending on your choice in narrator and whether you opt to pay per hour of finished recording or provide a royalty share, audiobooks can be an additional money-maker with little additional effort once you’ve recouped the cost of production. And even with the industry’s steady growth in recent years, audiobooks still yield less competition than e-books, which translates to a greater ability to get noticed and inch upward on bestseller charts, according to the Alliance of Independent Authors.

“What I do is a business,” says author Pamela M. Kelley, who has published about a dozen audiobooks, all but one of those in the past two years. “My product is my books, and my customers want audio.” Kelley doesn’t listen to audiobooks herself, but she says she was convinced to give the format a chance when, at a local book club she attended, she learned that eleven out of the twelve women there said they preferred audio over print. Now, she says her readers have come to expect the option, asking far in advance of new releases whether an audiobook will be published then too.

But audiobooks don’t only help their authors. Joshua Berkov, an author and collections management librarian at the North Carolina Library for the Blind and Physically Handicapped, has published three novels and one short story as audiobooks. In his work, he sees “firsthand” the benefit audiobooks can have for people who cannot read print books or e-books, which can be the case for many people with visual impairments, dyslexia, visual processing disorders, or other disabilities.

“My audiobooks are not profitable, but for me, it was all about access,” he writes. “I wanted to make sure my books were accessible to people with visual impairments. This was more important to me than whether I might ever make a profit on them.”

Berkov’s difficulty earning a profit from audiobooks isn’t rare. Creating audiobooks can require a hefty upfront cost of either time or money, and like with anything in the independent publishing business, they’re not guaranteed to make that investment back in short order. Kelley recommends doing research into other books in your genre to see if audiobooks are in demand from those readers and focusing on newer releases rather than something deep in your backlist as you consider whether to pursue the format.

How to Get Started

In spite of the less predictable aspects regarding profit, Kelley emphasizes the ease of production as one advantage to audiobooks. “It’s ten thousand times easier than I imagined it,” she says. “I think people are so intimidated by it. It seems complicated. It’s ridiculously easy. The narrator does all the work.”

For each of Kelley’s audiobooks, she opted to hire a narrator, paying per finished hour. Berkov also hired his narrators, finding both of them through ACX, an audiobook creation and distribution marketplace run by Amazon. Although Kelley chose to reach out to one of her narrators directly, many authors, such as Berkov, audition interested voice actors with a selection of scenes or dialogue from several characters in the manuscript to find the right fit. If going this route, try to wait a few days before making any decisions on who to hire, Berkov writes, as sometimes the later entrants have taken more care with their auditions.

After that, it’s up to the voice actor—the author’s only job is to provide notes regarding words that might be mispronounced and to review the narrator’s work for any sections you’d like them to re-record. Berkov encourages authors to be honest with their narrators about whether they want them to redo a section or deliver a line differently. “It’s your work ultimately, and you deserve to have it sound the way you want it to,” he writes.

Narrators generally charge between $250 and $400 per finished hour, with more experienced narrators sometimes costing more, according to Kelley. With one finished hour spanning nine thousand to ten thousand words on average, that means a complete audiobook can cost more than one thousand dollars to create. Alternatively, authors can pay narrators via royalty share, but that comes with its own limitations, such as required Audible exclusivity and a 50 percent split of any royalties with your narrator for seven years.

Authors who are willing to sacrifice their time to save money on audiobook creation have a third option. Author M. L. Buchman records his own audiobooks and has published Narrate and Record Your Own Audiobook: A Simplified Guide to help other authors do the same. The process can be arduous—each finished hour of audio can take five to ten hours to record, edit, and produce, according to Independent Book Review—but for authors who have a clear speaking voice and want to save money, the trade-off can be worth it.

Once the audiobook is created, all that’s left is to decide on distributors. ACX makes books available through Audible, Amazon, and iTunes, offering a 40 percent royalty for those who agree to an exclusive contract with the marketplace. However, indie authors who pay their narrators per finished hour and who publish wide can sign a nonexclusive contract instead. This provides royalties of only 25 percent from ACX but allows for distribution on other sites, such as Findaway Voices or OverDrive, both popular audiobook distributors that also make books available at libraries.

Authors interested in producing audiobooks certainly have a wealth of options, and with the expense associated with the format, Kelley says it’s probably best to research what has worked for other authors and to wait until e-book sales are strong for a better chance of earning back your initial investment. When it comes down to it, there’s no one-size-fits-all approach to the format—the best way to learn what your readers want might just be to sit back and listen.