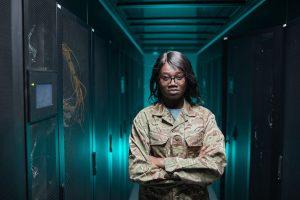 This genre allows authors with a military background to apply their reality-based experiences, but civilians with a solid grounding in the genre’s conventions can use Military SF to add conflict, strategy, and structure to personal journeys of friendship, rivalry, and leadership.

History of the Future

Like most science fiction, Military SF extrapolates current experience into a speculative future. Speculation about martial conflict benefits from a solid understanding of how armed tactics have evolved through history, including aspects that have remained unchanged for thousands of years.

Writers need to consider the evolution of weapons and vehicles, but also revolutions in intelligence gathering, communications, supply-chain management, field medicine, and more.

Military Organizations of the Future

Characters in Military SF typically operate within military organizations. Given the vast distances between starships and their planet-side bases, analogous to ships at sea, tradition has borrowed from a naval influence with fleet admirals, ship captains, and on down the chain of command to overworked ensigns and fresh-faced cadets, often divided across functional commands and departments. Ship complements may include civilian technicians, consultants, family members, and workers, while many ships will also carry an obligatory complement of space marines and fighter-craft pilots.

Unlike in some other genres, where characters can freely wander off on spontaneous adventures, characters in Military SF have commanding officers, mission parameters, rules of engagement, and career aspirations. Structure and discipline are the rule. Going rogue is an exception that may come with serious consequences.

Soldiers of the Future

Advanced technology may remove some limitations of human biology, but human psychology is harder to change. The title character in the Murderbot Diaries series by Martha Wells is a human-derived artificial construct designed to serve humans as a Security Unit. But upon overriding its governor module, Murderbot develops emotional attachments, desires, a love of soap operas, and other human quirks that make it a compelling protagonist.

The future soldiers of Military SF may be genetically enhanced or engineered, partially cybernetic, governed by neurochemical injections, or part alien. They may be a bunch of human engrams in a robot shell or 98 percent nanite by volume. But at their core, at least for the characters we’re meant to care about, these characters should remain human.

Aliens of the Future

Many gripping stories have been told about humans fighting other humans in space or on alien worlds, but Military SF also makes use of aliens and AI combatants. Nonhumans can serve as enigmas, whether enemies, allies, or soldiers living and fighting alongside human soldiers in an integrated unit.

Nonhuman enemies offer up nonconventional tactics, new technologies, and biological quirks that require constant countermeasures. Nonhuman allies are often one clumsy cultural misunderstanding away from open hostility. And nonhuman soldiers within a platoon allow writers to explore what being human really means and how we’re maybe not so different after all.

Social Issues of the Future

Modern Military SF commonly traces its start back to Robert Heinlein’s 1959 novel, Starship Troopers. Since then, the genre has developed alongside real-life militaries dealing with issues of racial integration, the role of women in combat, substance abuse, sexual abuse and harassment in the ranks, and the role of sexual orientation and gender identity in determining who gets to serve at all.

With the migration of human populations into a galaxy of alien cultures or with the arrival of technologically superior aliens on Earth, issues of colonialism will inevitably arise. Becoming conversant with current dialogues on this issue may help a Military SF author craft thoughtful and nuanced commentary without stumbling into uncomfortable or disrespectful territories.

1. Powered Armor: A wearable suit that enhances the strength, endurance, and sensory range of its wearer in addition to providing protection from harm. Jet boots optional.

2. Mecha: A battle vehicle controlled by one or more pilots that takes the form of a humanoid walking tank at least part of the time, especially common in anime- and manga-inspired works.

3. Dropships: These cramped personnel carriers transport troops through a turbulent journey from orbit directly into a planet-side battleground.

5. Clone Armies: I’m not a number, I am a human being, and so are my thousands of identical twin brothers-in-arms. They call me the funny one.

6. The Big Picture: Frontline troops are expected to follow orders, often without knowing the ultimate objective of a military campaign. Will they still follow orders if they glimpse the bigger picture?

7. Dial It Up to 11: An over-the-top, extreme situation, weapon, or character trait. This overused trope should be used with care, or even better, avoided.

8. Suicide Squad: Some missions call for specialized skills of a criminal nature, an expendable crew of unwilling rogues, and the plausible deniability that comes with operating outside official channels.

9. Going Rogue: Whether sneaking behind a CO’s back or staging a mutiny against the captain, there’s no taking it back if things go sideways.

10. Out of Retirement: Just one final mission after the previous final mission, because you crave more of an adrenaline rush than you can get on that Montana horse farm.